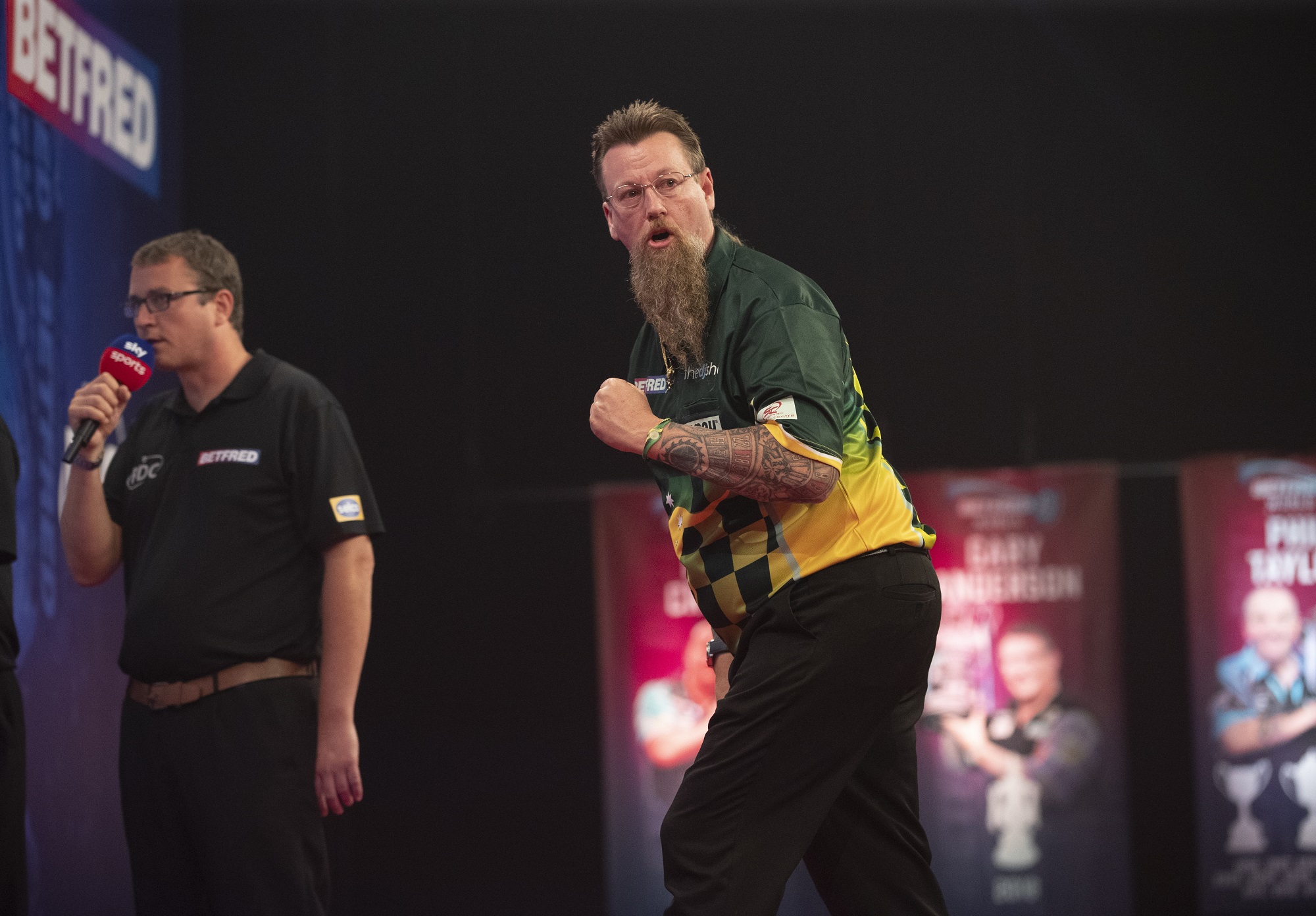 The Wizard caused the biggest upset of the week so far. His 11-4 victory over the world number one was his first against van Gerwen in 16 attempts.

Elsewhere on a dramatic day four of the World Matchplay:

After his first round victory, Whitlock said to Online Darts: “I’m not scared of Michael.” The Australian proved that was the case with an astonishing performance.

Whitlock came out firing from the off. He won the first five legs, punishing missed darts from van Gerwen in the third and fourth. A shellshocked MvG walked off stage 5-0 down averaging 86, while the Wizard was averaging 104.4.

van Gerwen got on the board in the next leg, after Whitlock missed D18 for a 6-0 lead. The Green Machine then got one break back in the seventh leg, hitting D20 to trail 5-2.

This started a sequence of six straight breaks of throw. Every time van Gerwen got the break back, he could not hit a double in the next leg to consolidate it, and Whitlock continue to punish him.

The score was 8-4 to the Australian before we had a hold again. It was a crucial one, as van Gerwen missed four darts to win the leg and break back for 8-5. With 68 left, Whitlock missed a big 20, but still managed to find D13 to go 9-4 up.

MvG missed two more to win the next leg, with Whitlock hitting D14 for the sixth break of van Gerwen’s throw. The Wizard then hit D9 to complete a memorable 11-4 win.

An ecstatic Whitlock told Online Darts after his win: “I’m over the moon. Michael is the best player on the planet but he had an off day and I took advantage of that.

Asked whether he has one eye on the title, the Australian said: “I’m just going to take it one match at a time. I know I’m playing amazing this year.”

Michael Smith was the first man into round 2 tonight. In a battle of the last two runners up of this tournament, he came through against Mensur Suljovic in an utter classic.

Suljovic started the brighter, going 3-0 up with a break in the second leg. He went into the first interval 4-1 in front thanks to a magnificent 136 checkout, after Bully Boy had hit a 180 to leave 114.

Smith managed to get the break back in the seventh leg, but the Austrian regained it in the eighth leg with a 13 darter. After both held their throw in the next two legs, Suljovic went into the second break 6-4 up.

Smith once again got the game back on throw after the restart, but then missed four in the next leg to level the match. This allowed Suljovic to swoop in with a 16 dart break of throw on D7 for 7-5. A similar story happened in the 15th leg. Bully Boy missed another four darts for the leg, and the Austrian pinged a brilliant 125 checkout to go 9-6 ahead.

Smith came fighting back, and got the break back once again in the 17th leg with a brilliant 103. He then levelled the match up at 9-9, and both players held their throw to take it into extra time.

Bully Boy went ahead for the first time in the match in the 21st leg. He hit an 84 on the bull to get a crucial break. Suljovic then produced his best leg of the match. He left 91 after nine darts before taking it out for a 11 dart break, to level it up at 11-11.

After both held throw for 12-12, Smith got another break to lead 13-12, as the Austrian missed five for a lead of his own. Suljovic would miss another three to take the match into sudden death, leaving Bully Boy to ping in a 110 to end an astonishing game and win 14-12.

A relived Smith told Online Darts afterwards: “I’m happy, I’m over the moon. For a game that I struggled so much in, and to come out winning… I didn’t want to go home.”

The final game on day four of the World Matchplay also went to extra legs. Krzysztof Ratajski and Gabriel Clemens produced another stunning game, with Ratajski coming out on top 12-10.

It seemed like it would be a simple night for the Polish Eagle. After Clemens missed bull to take the opening leg, Ratajski found a 110 checkout to take an early break 1-0. He then consolidated the break to go 2-0 up.

Clemens would not let him get away though, and he managed to keep the game close throughout. 15 holds of throw followed, with the only real break opportunity coming in the 13th leg. Ratajski missed two chances to take an 8-5 lead, and Clemens found D16 to stay the one break behind.

The German debutant managed to finally break Ratajski’s throw in the 18th leg. The Polish number one missed three darts at D16, and Clemens found D18 to punish him and level the match at 9-9. The German then went in front for the first time by finding D14, after more missed doubles from Ratajski. However, the Polish Eagle put them out of his mind, and recovered to hold throw and make it a 10-10 game, taking us to extra time.

Clemens then missed three darts to hold his throw in the 21st leg. Ratajski punished him with a D13 to get the break and go 11-10. A clinical final leg followed, as Ratajski hit tops to win 12-10 and reach his first ever World Matchplay quarter final.

Speaking to Online Darts after his victory, Ratajski said: “I’m very happy after such a close game. To win when it is such a close match is very good.

Gary goes onto the quarter finals

Gary Anderson and James Wade met for the 55th time in their careers on day four of the World Matchplay. In this game, the Flying Scotsman beat the Machine 11-8 to advance to the last eight.

After trading breaks of throw in the opening two legs, both players then held throw to make the match at level 2-2. Wade then broke again in the fifth leg, taking out a magical 148 checkout when Anderson missed double top.

Anderson got the break straight back to level again at 3-3, before two more holds meant the match was level at 4-4. The match was decided between the ninth and the 13th legs. During this time, Anderson was magical. He was on a nine darter twice, and only gave Wade one shot at a double. The two time back to back World Champion won all those five legs, to take a 9-4 lead.

Wade would not go down with a fight though. He reeled off three straight legs to take the match to 9-7. However, Anderson managed to hold his throw twice to win the game 11-8 and progress to his second Matchplay quarter final in three years.

Anderson said to Online Darts after his win: “There was some good and some absolute tripe. I’ve got to work out where it’s going wrong.”

Day four of the World Matchplay began with the final first round game. Dimitri Van den Bergh made his debut at the tournament with a 10-5 victory over Nathan Aspinall.

Both players started with breaks of throw, before holding throw to make the match at level at 2-2. The damage was done from Van den Bergh during the fourth and 10th legs.

The Belgian scored sensationally, and punished missed darts from Aspinall, as he won five out of six legs. The biggest moment came when Aspinall got one break back to make it 6-3, before missing D16 to go into the second interval at 6-4 down. Van den Bergh hit a magical 103 to steal the leg and take a 7-3 lead.

Despite three more straight breaks of throw, Van den Bergh held on for the win. After more missed doubles for the Asp, the Dreamaker found D16 to go 9-4 up and within a leg of the match. Van den Bergh then sealed the deal with a hold of throw to win 10-5, and hand Aspinall his second straight first round loss at the Matchplay. It also gave the Belgian some revenge, after The Asp beat him in the World Championship quarter finals this year.

After his win, Van den Bergh said to Online Darts: “winning against a player like Nathan for me is a very great job. I’m proud of myself.”