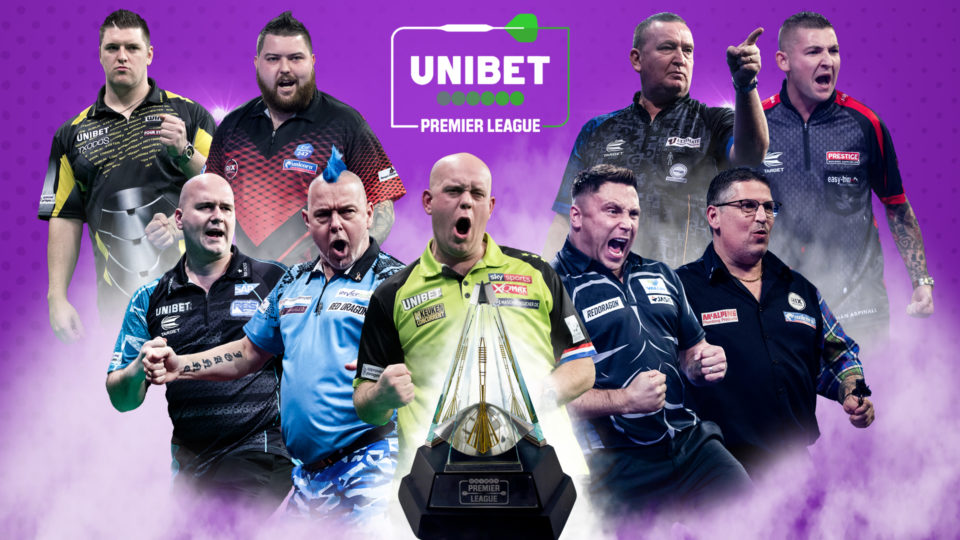 Glen Durrant remains the only player to qualify for the Play-Offs after night 15 of the Unibet Premier League.

On a night of high drama in Milton Keynes:

Nathan Aspinall kept destiny in his own hands on night 15 in the Premier League. He beat Daryl Gurney 8-5, coming through an absolute scrap.

The Asp started the game brilliantly, winning the first three legs and averaging 113, taking a double break of throw in the process. However, Gurney produced a stunning fourth leg, leaving 46 after nine darts and hitting double 16 for a break back.

After sharing the next two legs to trail 4-2, Gurney would then win three straight to take the lead for the first time. He punished three missed darts from Aspinall in the eighth leg to level at 4-4, and found double top when The Asp missed it himself in the ninth to take the lead at 5-4. In doing so, he ensured Aspinall couldn’t qualify for the Play-Offs this evening.

However, The Asp showed why he deserves to be on the Premier League stage. After finding a double seven to level at 5-5, the debutant punished four missed darts from Gurney in the 11th, hitting double eight to regain the lead at 6-5. It was a lead he would not relinquish, hitting a 12 dart hold to guarantee and then double top for the match to claim an 8-5 victory.

For Aspinall, it puts him on 17 points with a +5 leg difference. If he were to win 8-3 or better tomorrow against Glen Durrant, he would be in the Play-Offs. For Gurney though, that loss means he will definitely finish eighth in this year’s competition.

Wright puts one foot in Play-Offs

Peter Wright handed Glen Durrant his second defeat of the campaign, and put himself firmly in a Play-Off spot thanks to an 8-6 win.

In what was a slow burner of a game, the opening six legs went on throw, with Durrant scoring brilliantly on the legs he started on. He created chances on the Wright throw, but could not take them, as Snakebite hung in the game to keep it level at 3-3.

The crucial moment came in the seventh leg. After missing two darts in the previous visit, and seeing Durrant miss double 16 for a 104, Wright pounced by hitting double 12, giving the world champion a crucial break of throw and a 4-3 lead. Wright then consolidated the break by leaving 56 after nine darts thrown in the next leg, eventually finding double 10 for a 5-3 lead.

Durrant continued to show the grit and determination that has seen rescue draws throughout the second phase of the league, but he could not find a point tonight. Despite taking the game to a last leg decider, he could not find the break back. Wright had to visit the madhouse on double one to get the job done, but succeeded in doing so, ending a tense and tight contest.

Wright moves onto 18 points, which leaves him third place in the table, and a point will guarantee him a Play-Off spot. For Durrant, he remains on 21 points, and needs to win three legs tomorrow to win the league phase and pocket the £25,000 bonus.

Michael van Gerwen is still in the hunt for a Play-Offs spot with a massive 8-6 over Gary Anderson on night 15 of the Premier League.

After sharing the opening two legs, van Gerwen got the first break, finding D18 for a 12 dart break of throw to lead 2-1. After holding the next leg, he could have found a second break of throw, but missed tops to go 4-1 up. This allowed Gary Anderson to stay in the match by hitting double eight and trailing 3-2.

Van Gerwen though would not be denied the double break, as he hit double 16 for a 5-2 lead. However, he suffered a setback in the eighth leg. After not going for the bull for a 127 checkout, he then missed three darts for a 6-2 lead. This allowed Anderson to hit double four to get back in the game.

This sparked life into Anderson, as he reeled off three straight legs, breaking in the tenth leg after van Gerwen missed tops for 6-4. The Flying Scotsman went ahead for the first time in the match by hitting D20, and at 6-5 ahead, looked like he would secure at least a point to qualify for the Premier League Play-Offs.

However, van Gerwen held his throw to level at 6-6, and then got the crucial break in the 13th leg, hitting double 16 after Anderson missed tops. After a slow start to the final leg, MvG would find his scoring range, and found double top to complete a huge win over his great rival Anderson.

Van Gerwen remains fifth, outside the top four on leg difference. He must better Nathan Aspinall’s result by three legs to guarantee himself a place tomorrow night. For Anderson, he is still looking for the one point that would get him to the Play-Offs on Thursday 22 October.

Gerwyn Price and Michael Smith did battle in the match of the night, with a 7-7 draw probably the fairest result.

Despite already being eliminated from top four contention thanks to results earlier in the night, back to back 108 checkouts from Smith on his throw gave him an early 2-1 lead. He then punished three missed darts from Price in the fourth to hit double 10 and go 3-1 ahead.

Bully Boy went 4-1 up, before Price almost found darting perfection. He hit eight perfect darts, but missed double 12 for the nine dart leg, the third time this has happened in the Premier League bubble over the last week and a half. Price had to settle for a 10 dart leg, and that seemed to inspire The Iceman. He got the break back from Smith with a magical 164, before hitting double top for a 70 outshot to level the game up at 4-4.

Both players continued to hold throw, and Smith missed three darts to guarantee a point in the 11th leg. He would have led 7-5 and been throwing for the match, but, much like the story of his Premier League could not find the winning double, allowing Price to ping double 20 and level the game at 6-6.

Smith would then find double 11 to take a point in the next leg, but Price, knowing he had to get a point to stay alive in the Premier League, found D10 to get the draw and end a brilliant game, with both players averaging over 102.

For Price, he knows he must beat Gary Anderson tomorrow, and hope Aspinall and van Gerwen lose their matches to sneak in on 17 points with a better leg difference. For Smith, he is all but guaranteed to finis seventh, unless he beats Peter Wright 8-0, and Price loses to Anderson 8-0.

You’ll be able to watch all the drama of the final night of the Premier League from Milton Keynes on Sky Sports, and via the PDC’s broadcast partners. It will start at 19.00 BST.

Here at Online Darts, we’ll have every dart of the Unibet Premier League covered.

We’ll have a live blog from 19.00 BST, giving you leg-by-leg updates and updates to the table as it stands.

We’ll also have reaction for you with every winner direct from Milton Keynes. Head over to our YouTube channel and hit subscribe so you don’t miss a video.

Follow all the drama of the final night of Premier League with us at Online Darts.