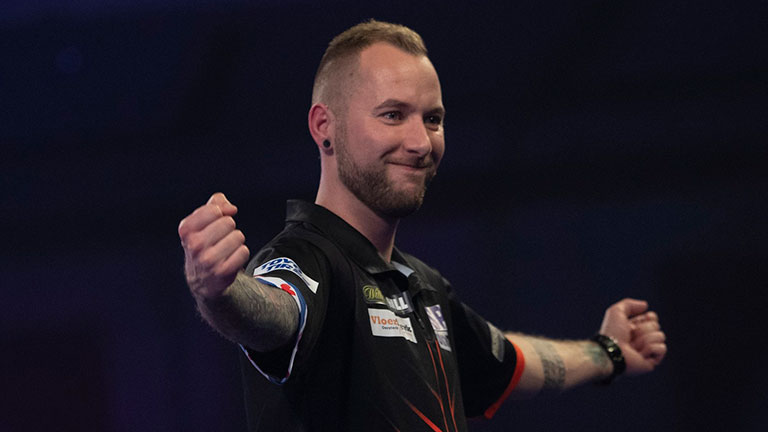 Noppy Freezes Out The Rest To Claim Title

After watching his World Cup of Darts team mate Dirk van Duijvenbode claim Friday’s Players Championship 18, ‘Noppy’ started his assault on the title in impressive fashion, whitewashing Gordon Mathers, posting a 102 average in the process. Victories over English duo, Luke Woodhouse and James Wade followed, the latter in a last leg decider. Matt Campbell was dispatched in the last 16 before Rowby-John Rodriguez was comprehensively beaten in the quarter finals for the loss of a single leg. Luke Humphries was then soundly beaten in the semi finals as Noppert booked his place in the final.

His opponent in the final would be Andrew Gilding. ‘Goldfinger’ also opened up his campaign majestically, defeating Jules van Dongen 6-4 while averaging 103. Gilding then defeated the English quartet of John Brown, Jack Main, Martin Lukeman and Lee Evans, dropping just six legs in the process as he eased into the semi finals where Ryan Searle lay in wait. A see saw encounter culminated in Gilding edging a last leg decider to set up a clash with Noppert.

After the opening seven legs went with throw, it was Gilding who seized the initiative. ‘Goldfinger’ broke the Noppert throw courtesy of a 12 darter, finished by a 121 checkout. Two 140s in the next leg helped Gilding hold throw to go within two of victory. Noppy then stepped up a gear, holding throw before returning the favour of breaking in 12 darts. Another Noppert hold was followed by another 12 dart break, assisted by two maximums. Noppert was now throwing for the match and duly held in 15 darts to seal the title. The win takes Noppert up to 11th in the PDC Order of Merit.

Former World Cup of Darts finalist Rowby-John Rodriguez’s run to the quarter finals took him a step close to sealing his World Matchplay spot. That was after closest rivals in the race Ross Smith and Ricky Evans both bowed out in the opening round today.

Simon Whitlock and Keane Barry fared little better, both knocked out at the last 64 stage.

Vincent van der Voort made it to the last 32 before being beaten by Ryan Searle.