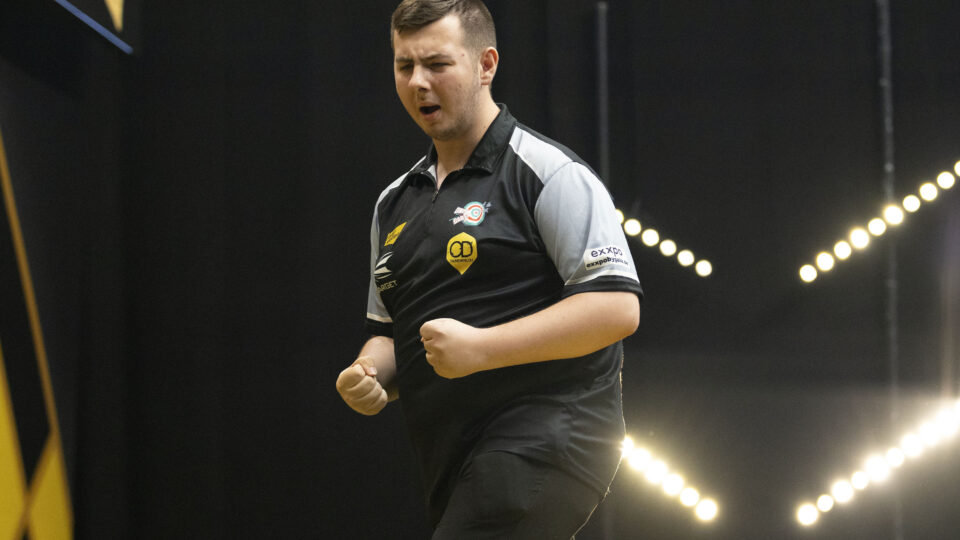 Noppert falls on day one in Trier

On the opening night of the Interwetten European Darts Matchplay, Rowby-John Rodriguez eliminated Danny Noppert in a nail-biting last leg to set up a matchup in the second round against top seed Gerwyn Price in Trier.

As the £140,000 tournament began on Friday, Rodriguez overcame a 5-3 deficit to defeat UK Open champion Noppert after surviving four match darts over the course of three legs.

Before Noppert took control with back-to-back 14-darters, the pair traded tons-plus finishes. However, the Dutchman was unable to complete the job, as Rodriguez maintained his composure to win with a precise two-darter 78 kill in the decider.

Callan Rydz, a World Championship quarterfinalist, put on an outstanding performance of combination finishing to prevent Jon Worsley from earning his first victory on the European Tour.

Rydz got things going with a double-double 96 finish, then added checkouts of 124 and 125 to win the match 6-3. Rydz will now face seventh seed Damon Heta in an exciting tie.

Sebastian Bialecki, a 19-year-old from Poland, defeated the seasoned Mervyn King to take home his historic first victory on the European Tour.

King struck first with a superb 11-darter, but UK Open quarterfinalist Bialecki responded, following a 112 outshot with a 14-darter to set up a match against Stephen Bunting in the second round.

To beat Niels Zonneveld 6-3, Cameron Menzies averaged 101 in the opening round. He will now play Luke Humphries, who wants to win his fourth European Tour championship in 2022.

In the next round, Wenig will take on Chris Dobey, and Hempel will face a hot-handed Dimitri Van den Bergh in a rematch of their World Championship match from last December.

Ian White, a three-time European Tour event winner, defeated Joe Murnan by a decisive score of 6-1 and will face the defending champion Joe Cullen for a spot on Finals Day.

Martin Lukeman, who finished second in the German Darts Grand Prix, will face second-seeded Ryan Searle in the second round after edging John Michael by a close score of 6-4 on Friday night.

In other matches, Scott Williams overcame Radek Szaganski of Poland’s outstanding comeback to set up a tantalising match against Jonny Clayton for a spot in Sunday’s third round.

Player of the Year for 2017 Williams led 3-0 and 5-2, but Szaganski fought back to force a decider with a pair of 12-darters, and the Englishman then sealed his victory with a 16-dart hold.

Wesley Plaisier continued his impressive streak on the European Tour by putting on another great performance on a big platform to defeat Jamie Hughes in a competitive match.

The Dutchman pulled off an incredible 167 checkout in leg three before capping a 6-4 victory with a 111 combination. His reward is a matchup against fourth seed Jose De Sousa in the second round.

Jermaine Wattimena easily defeated Ross Montgomery, a rookie on the European Tour, 6-1 to go to a second-round matchup against eighth seed Nathan Aspinall.

In the meantime, James Wilson started the action on Friday with a valiant 6-3 victory against Johan Engstrom of Sweden, setting up a matchup with Rob Cross, a three-time finalist on the European Tour in 2022.

Jeffrey de Zwaan, Luke Woodhouse and German number one Gabriel Clemens will begin their campaigns on Saturday, after receiving byes through to round two following the withdrawals of Peter Wright, Michael van Gerwen and Michael Smith.

Saturday’s second round will see the 16 seeds enter the fray, including top seed Price and defending champion Cullen, before the tournament concludes with a blockbuster double session on Sunday.