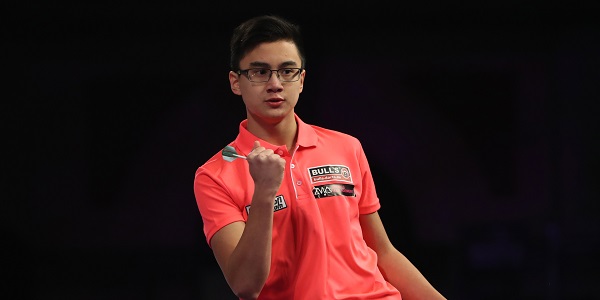 Rusty-Jake Rodriguez picked up his 2nd and 3rd titles of the week as he swept day 3 in Niedernhausen, adding to his event 2 title.

The young Austrian produced a stunning day of darts that would not have looked out of place on the Pro Tour, dropping a combined 8 legs from the quarter finals onwards.

In event 5 Rodriguez dropped just 7 legs on his way to the title, with the highlight being a 105 average as he won to nil against Joshua Hermann.
The 100+ averages didn’t stop there either, as Mike Van Duijvenbode was on the receiving end of another, before Rodriguez brushed aside Niels Zonneveld in the final 5-0!
Rusty-Jake saved his best performance in event 6 for the final, where he went over the ton mark yet again, averaging 101.19 to beat Niko Springer.

In Milton Keynes, Nathan Rafferty and Bradley Brooks became the 5th and 6th different winners on the UK development tour this season.

Rafferty picked up his 3rd career title by white-washing Daniel Perry in the final, after previously beating 5 other Englishmen on the day.
That list included Ted Evetts and the reigning world youth champion Bradley Brooks.

But it was Brooks who had the final say, as he ensured he didn’t leave Milton Keynes empty-handed in superb fashion. Lewis Williams, Joe Davis and Keane Barry all attempted to stop Brooks before the final to no avail before Ted Evetts fell at the final hurdle.