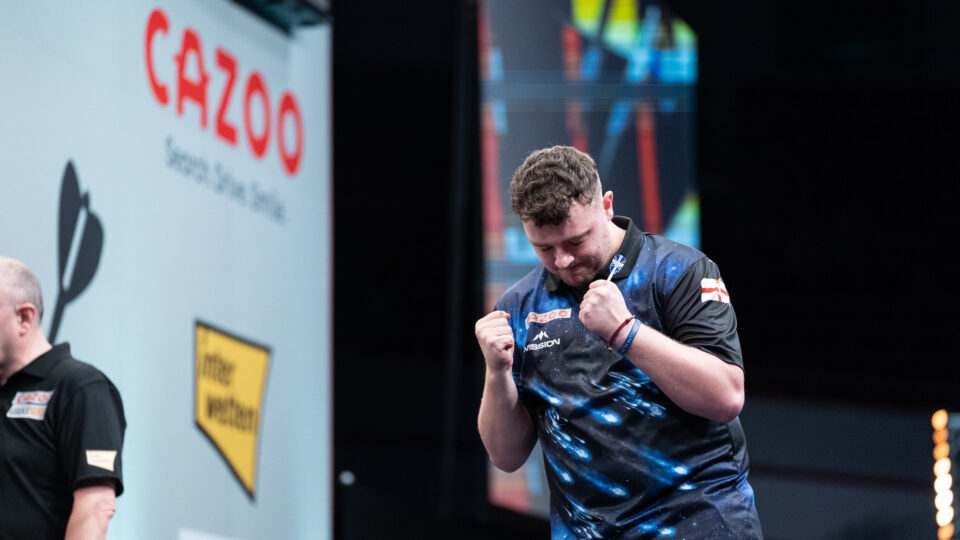 The last 16 action gets underway in Dortmund this afternoon with 4 matches over the extended format of best of 19 legs. Following yesterday evening’s barrage of shocks, with Cullen, Price and van Gerwen falling by the wayside, the clashes this afternoon are all tough calls.

Vincent openly admitted to motivation struggles through 2022 following his enforced Covid withdrawal from the World Championship in his interview after his victory over Damon Heta. He seemed to take particular offence at Barry Hearn suggesting it was his fault after ‘that’ get-together. Regardless of any issues earlier in the year, the clinical way in which he dispatched Heta certainly suggests he has got his head in the right place now, despite his lower average at 87 a dig into the stats shows Vincent finishing 2 legs in 5 visits and 3 in 6. a couple of poor legs lost dragging the average down. Danny is now playing with the authority of a major winner, the defending UK Open champion making light work of in form Andrew Gilding in round 1 making a 99 average look relatively straightforward, a word of caution would come in the form of his results at the recent Players Championship series where promising averages were followed by early exits. He comes into this one as the higher seed and a strong favourite with the bookmakers and the suggestion of a scoreline somewhere between 10-5 and 10-7 seems like a reasonable prediction in this case.

Very much a tale of two men at very different stages of their careers in our second encounter of the day. Wade snuck past Rob Cross on Thursday evening to ensure another defending champion was dumped out in round 1 but he was extremely critical of his own performance, stating once again that he has been ‘playing rubbish for months’, it is a view that is hard to argue against, with a last 16 exit at the matchplay and a 1st round calamity in Dublin, Wade is once again banding about retirement. This again seems premature at 39 but maybe if James isn’t enjoying the game, it is time to walk away, he is young enough to come back. Meanwhile, the ‘Aubergenius’ is enjoying one of the best spells of his career, seemingly in the winner’s circle or finals at will, boasting 2 Players Championships this year and a deciding leg loss in the World Series final. A sign of the current form is the discussion of a possible Premier League place even if Dirk says he’s not quite there yet. It is a sign of the times that a man only surpassed by Phil Taylor and Michael van Gerwen for TV titles comes into this one as the underdog, an intriguing contest ahead.

An interesting match up this one, as the number 1 seed takes on one of the most consistent and improved players on the circuit over the last 2-3 years. Humphries managed to shrug off forgetting his darts on Thursday evening, putting a new set to good use as he skewered Krzysztof Ratajski with a 102 average and 4 maxes. There is a huge expectation on Luke to win a big one sooner rather than later and the way the draw opened up yesterday evening will only increase this, he is now sat at joint 2nd favourite and is hard to argue when he has handed out a bagel to MVG during the tour. However, with the arrival of his son still very recent it remains to be seen if he can hold it all together and take home the title. Ryan came through an absolute humdinger in the opening round, with Martin Lukeman throwing the kitchen sink and all the appliances at him but still coming up short as Searle completed back-to-back 14 darters to get over the line.  Searle was more than happy to share that he has not enjoyed the Euro Tour this year, with it back in full swing, he, like many, has been away from family more than ever. He intends to pick and choose next year and this may well offer an insight into the future for Luke Humphries too as he juggles new responsibilities.  You would think Humphries is a heavy favourite here but Searle was imperious on Thursday and any repetition of that form and we are likely to see 17 legs plus here.

The final game of the afternoon sees the original development tour prodigy, Smith, taking on the new kid on the block, the form man on tour, Josh Rock. Smith got the job done against Sedlacek on Thursday, his excellent 46% on the double helping to disguise scoring which was not where Michael would expect it to be. Another player chasing the elusive first television title, he is another who will be excited by the results on Friday evening, even if he would never tell you that, he must fancy that if he can click his scoring and maintain the doubling of the first round, then he can finally get the monkey off his back, you do feel that once he does it might be a case of just how many he can win. Meanwhile, Josh Rock is looking increasingly like he might produce the kind of fairytale story Rob Cross did in 2018, with Josh now openly talking about winning the World Championship. It is understandable that this conversation is happening already, with a first Players Championship final swiftly followed by a first win last week. You have to take his form seriously, the only man on the planet with a running average over 100, over his last 200 legs of darts. Potentially the only thing in his way is that it has taken him longer to get to TV than it did Cross, who already had the Matchplay and Grand Prix under his belt at the same stage of his own breakout year.  It was his run to the final of this tournament which made everyone sit up and take note and Rock could very well do the same here. Remarkably he goes into this match on his televised debut as favourite against a man who has been the runner-up on TV 7 times. You can’t help but feel that might fire Smith up to produce something special this afternoon. Either way, it promises to be an absolute barnstormer and don’t be at all surprised if we see the full 19 legs.