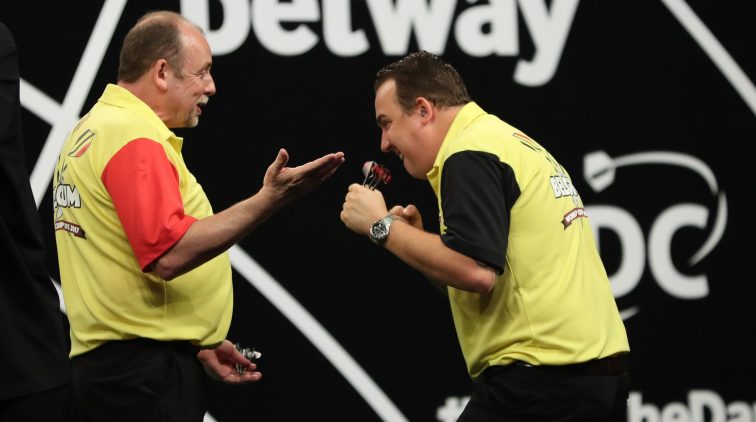 The 4th seeds Belgium are out of the World Cup of Darts after losing in straight sets to Austria.

Germany and Wales both required pairs matches to progress to the quarter finals, after Hopp and Clayton loose singles matches.

Elsewhere on day 3 of the World Cup of Darts:

The much-fancied duo of Dimitri van den Bergh and Kim Huybrechts failed to make it through to the Quarter finals after been beaten handsomely by Mensur Suljovic and Rowdy-John Rodriguez. Belgium entered the game as have favourites given Suljovic’s recent hiatus from the tour, and Rowdy-John no longer holding a tour card.

Huybrechts is no stranger to a 100+ average at the World Cup, sitting 4th in the list of most 100+averages of all time in the event. But his 108.38 was not enough to beat The Gentle. In fact, it was only good enough for 1 leg, as the former Champions League winner ran out a 4-1winner. Austria 1-0

The second rubber was a complete contrast to the first. Van den Bergh and Rodriguez are no strangers to each other, having met multiple times on the PDC Development tour. Both players are too old for that competition now, and their careers have seemingly gone in opposite directions since, with Rodriguez now competing on the Challenge Tour, and Van Den Bergh the former Matchplay Champion.

Both players managed just a 78 average in this one, with the scoreline once again in Austria’s favour. Rodriguez getting over the line with a 23 dart leg to win 4-2.

Wales win through via the pairs

The reigning champions were taken to a last leg decider against Lithuania, after Darius Labanauskas threatened to win the game single-handedly.

Gerwyn Price took care of Mindaugas Barauskas in the first tie winning 4-2.
But it was the performance from the Lithuanian captain that put the Welsh at risk. A 4-2 victory for Lucky D, despite averaging 8 points less than Jonny Clayton ensured the evening was not over yet.

Into the pairs then, and Wales looked like they were going to have too much ammunition for Lithuania. Price and Clayton. raced out to a 3-1 lead, but found themselves pegged back to 3 a piece thanks to some excellent finishing from Labanauskas. 60 and 64 in consecutive legs calmly taken out via double 20.

Lithuania pushed all the way, but ultimately found themselves just too far adrift in the final leg. Barauskas opening the leg with a score of 26, and his last 3 darts equating to just 10 allowed Gerwyn Price to step in and set up a rematch off last years quarter final against Australia.

Gabriel Clemens and Max Hopp survived a scare in front of their home crowd, needing the pairs match to come through against a new look Japan.

A relieved Clemens celebrated a 4-2 victory in the opening match, handing the reigns over to the younger, but more experienced World Cup player Max Hopp.

The Maximiser was far from his best, as he was defeated 4-0 by Yoshihisa Baba.
The former world youth champion only able to muster an average of 71.

It wasn’t to be for Baba and his partner Jun, as they fell 4-2 to the far more experienced pair. The Germans defiant in competition making yet another World Cup quarter final, but they’ll need to be much better to get past England tomorrow.

Northern Ireland got the day started with an excellent victory. Brendan Dolan defeated Jose Marques before a scoring exhibition from Superchin Daryl Gurney sent Jose De Sousa and Portugal out of the competition.

England were up next, with the new pairing of James Wade and Dave Chisnall. They looked a bit shaky in round one, but appeared to have embraced the ‘team’ nature off the World Cup today.
Wade got the first chalk on board with a 4-1 victory over Carl Gabriel before Dave Chisnall soon the battle of the 180 hitters against Devon Peterson. 4-2 in the one, and 2-0 win for England.

Australia vs USA nearly had it all. Simon Whitlock missed D18 for a 9 darts leg against Danny Lauby on his was to a 3-1 lead. The young American hit back with a 170 check out and earned himself the shot at a deciding leg. But the Wizard regained his composure to ensure Australia took the first point.
Damon Heta got himself a break of throw up at 2-1 against Chuck Puleo and never looked back. Both players trading holds for the remainder of the short match.

Peter Wright will be thanking partner John Henderson for his performance this evening as former champions Scotland progressed to the quarter finals.
Wright soon his singles rubber against Kciuk of Poland, but was less than convincing in do so. Snakebite never really settling in the match.
He would have had to return to the stage for the pairs game if the 2nd singles match had gone to plan for Poland. Ratajski opted to take on John Henderson hoping to force a pairs match. But that didn’t materialise thanks in part to Henderson’s ability to stay calm, as both players missed bucket loads of darts at double in the early stages.

Title-less in 2021 Michael van Gerwen is in no mood to play around in Jena.
He beat darting icon Paul Lim 4-0 to get the Netherlands off to the perfect start.
Given the recent improvement in Dirk van Duijvenbode game, the 2nd singles should have been a lot more comfortable against Harith Lim. But Lim Jnr. played superbly, and were it not for a couple of wayward darts at a. double, we could have seen a pairs match to decide this one. Alas, the aubergenius as he has affectionately been come to be called won 4-3, and the Netherlands became the 5th seeded team to win in straight sets.

Don’t forget to head over to our YouTube channel, OnlineDarts TV to check out the rest of our interviews with all the winning teams from today. PDC World Cup of Darts Day 3 Roundup as Belgium defeated at World Cup of Darts