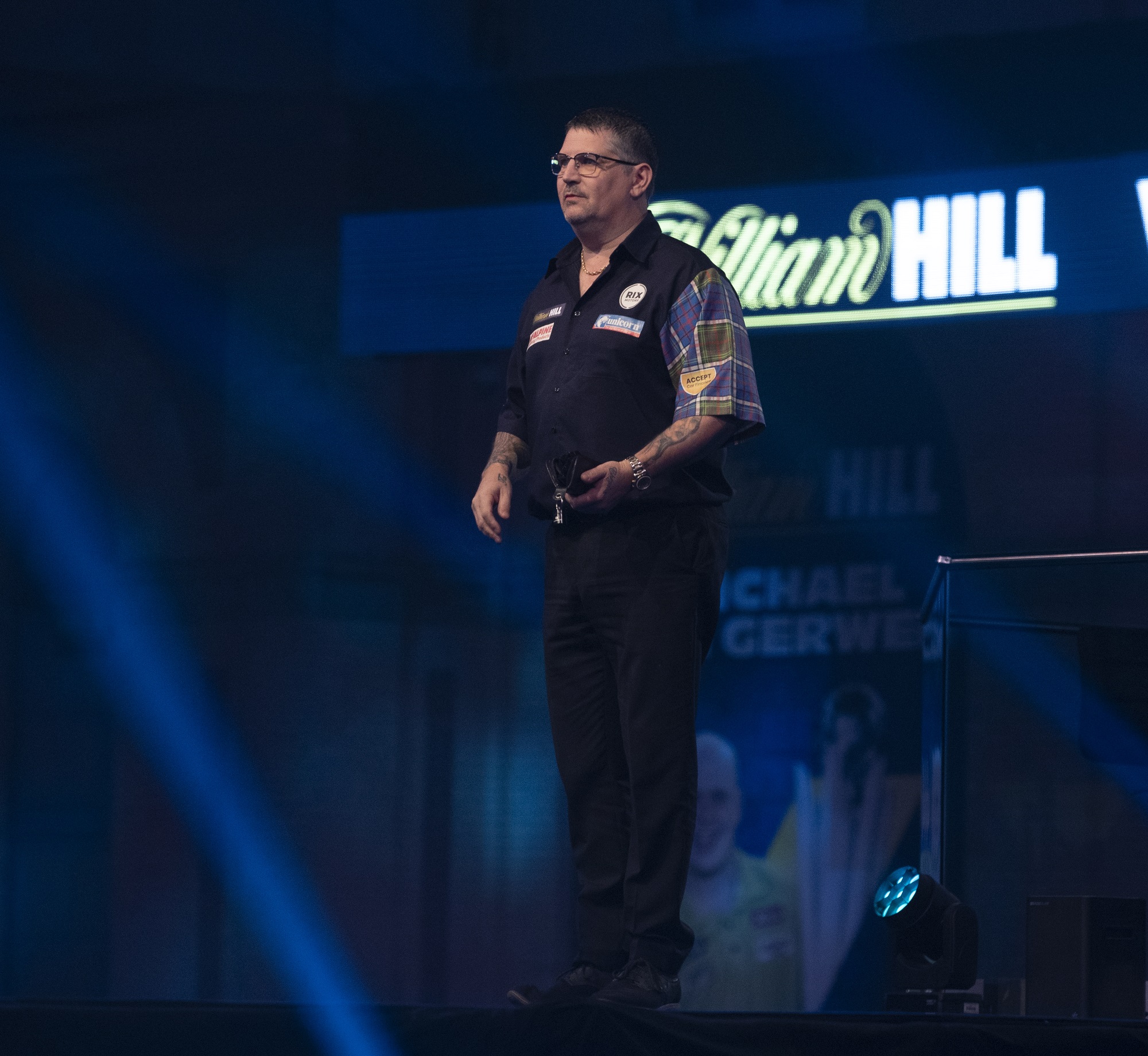 Gerwyn Price won on night one of the 2021/22 PDC World Darts Championship to be the first player into round three.

Today at Alexandra Palace sees the first double session of the event take place. Today, a four time World Champion takes to the stage, while there are two first round games that could become classics.

On top of all that, two back to back winners of this event square off in a repeat of two World finals in the last game of the day.

Here’s what to expect on day two of the PDC World Darts Championship.

After reaching the last eight of the Players Championship Finals a few weeks back, Daryl Gurney is certainly in a bit of form as he heads into his ninth World Darts Championship.

He’s looking to go beyond the quarter finals for the first time, as he takes on Ricky Evans in the last game of the day. Rapid Ricky dismantled Nitin Kumar yesterday, so can he reach the last 32 for the third straight year?

Elsewhere, what could be an underrated gem kicks us off on the second day of action. Steve Lennon faces off against Madars Razma. Lennon is looking to make it to the last 64 for the second straight year, while Razma, who made a Pro Tour final last year, is looking to do the same. Both have the scoring power on their day, but who will set up a clash against Krzysztof Ratajski tomorrow?

The other two matches see Scott Mitchell take on Chris Landman, while Chas Barstow faces off against John Norman Jnr. All four of them are making their debuts at this event, but which two will move into round two games against Ian White and Michael van Gerwen respectively?

The biggest match of the day is no doubt the clash between Gary Anderson and Adrian Lewis. Both are two time winners of this event, and have won it back to back as well.

They’ve met in two previous finals of the PDC World Darts Championship as well. Lewis won the first in 2011, while it was Anderson who got the better in 2016.

Lewis had to battle through against Matt Campbell yesterday, while Anderson will want to go one better than being runner up in last year’s event. The Flying Scotsman has also never lost his first game at Alexandra Palace. Will this be the year that we finally see that trend end?

Another World Champion also takes to the stage for her third PDC World Darts Championship appearance. The four time winner of the Women’s event Lisa Ashton takes on Ron Meulenkamp in the third game on.

The Bomb has made the second round of this event for the previous three years, while The Lancashire Rose has yet to win a game on the Alexandra Palace stage. Knowing that two victories would potentially save her Tour Card, will it be third time lucky for Ashton? Or will Meulenkamp continue his good first round record? Michael Smith awaits the winner.

Elsewhere, a gem of a game starts off the evening session, as William O’Connor. O’Connor won a Pro Tour in 2019, but has yet to really kick on, with his best performance at the Worlds being the last 32 stage two years ago.

Danny Lauby qualified for his second straight PDC World Darts Championship through the Championship Darts Corporation this year, and lost a cracking game to Ryan Searle in round one. Who will set up a game against Glen Durrant in round two?

The final game to talk about is a clash between Ryan Meikle and Fabian Schmutzler. Meikle averaged 108.76 in beating Dirk van Duijvenbode at the Players Championship Finals, and is currently in the final place to keep a hold of his Tour Card.

Schmutzler only played in six European Development Tours due to only turning 16 before the final set of them. However, he won two events during the final weekend to secure his place, and will be the second youngest player ever to compete at the Alexandra Palace. Which one of the two will set up a tie with 2020 World Champion Peter Wright?