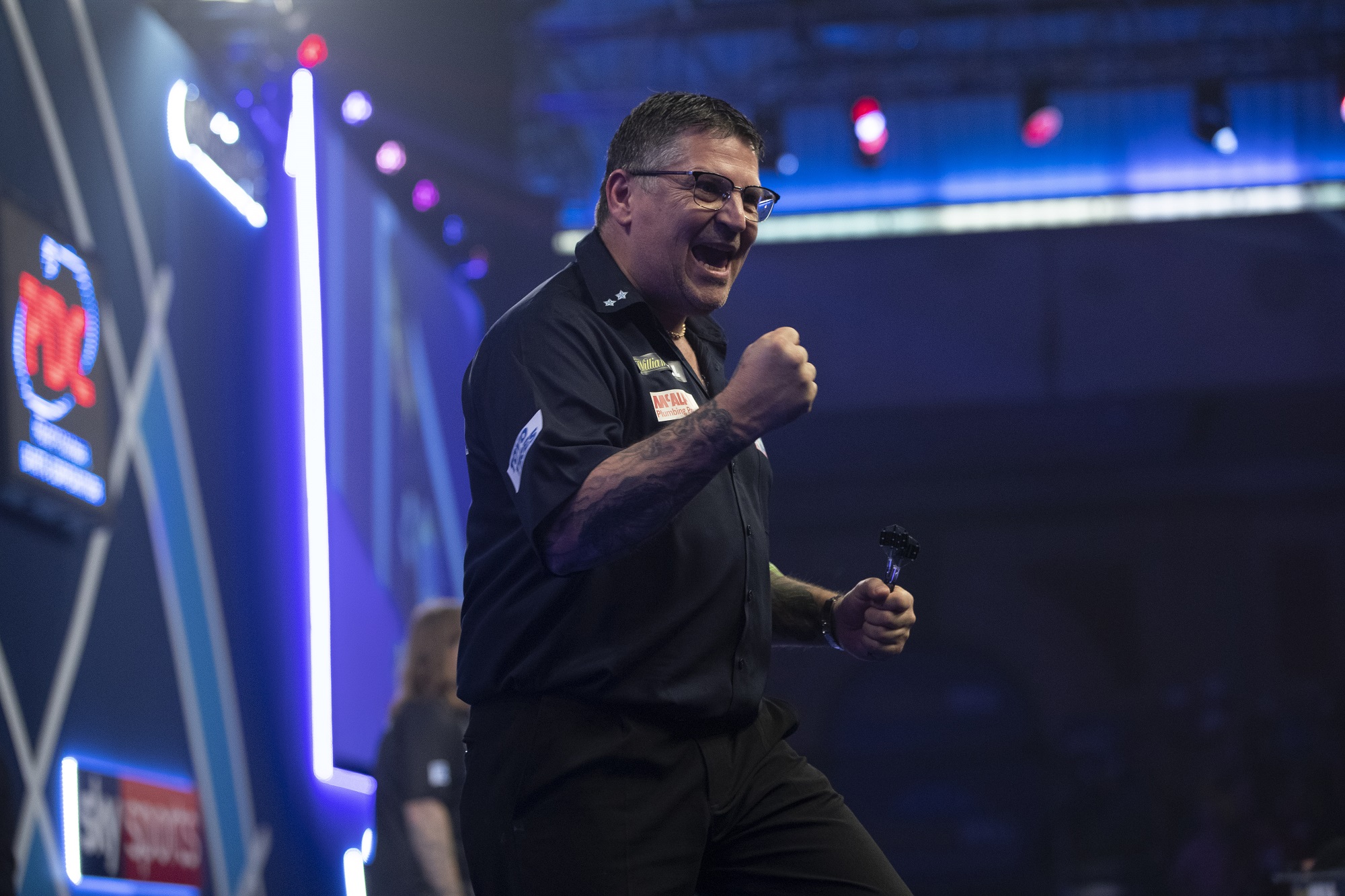 Gary Anderson came through against Adrian Lewis on day two of the PDC World Darts Championship.

A rematch of both the 2011 and 2016 finals of this event, Anderson continued his excellent record of winning every opening match he’s played at Alexandra Palace. He came through 3-1 in a game that saw seven 180s. Daryl Gurney came through the other round two game on the second day of action, as he beat Ricky Evans by the same scoreline.

Elsewhere, Lisa Ashton returned to the Worlds looking for her first win on the famous stage. However, Ron Meulenkamp won against her 3-0, meaning The Lancashire Rose will have to go back to Q-School if she wants to remain on the tour.

In other first round games on day two of the PDC World Darts Championship:

Anderson and Gurney return after Christmas

Lewis, who beat Matt Campbell on the opening night to set up this clash, started the brighter. After both held and broke in the opening set, Jackpot hit tops for a 16 darter to go 1-0 in front. The Flying Scotsman responded emphatically, winning the next set 3-0 while not giving his opponent a chance at a double.

Both broke at the start of the third set, but Anderson found shots of 85 and 92 to go 2-1 up against the darts. The Flying Scotsman then romped home, winning the fourth set 3-0, taking 60 out for the match. Anderson won nine of the last 10 legs into move into round three.

While Anderson went through in the evening session, it was Gurney who came through a cracking round two match with fellow stablemate Ricky Evans in the afternoon.

The first set consisted of four breaks, including a 146 from Evans, to force a decider at 2-2. After Superchin missed a dart to take it, Rapid Ricky cleaned up 72 to take a 1-0 lead.

The Northern Irishman though kept cool, breaking in the third leg of the second set. After both squandered darts in the fourth leg, the 2017 World Grand Prix champion eventually found double five to level the contest.

It was another 3-1 set for Gurney, this time finding double 18 to go within one of the match. Both held at the start of the fourth set, before both broke each other’s throw to force another deciding leg. In it, Evans missed four darts to force a fifth set, allowing Gurney to hit tops and end a cracking match.

Lisa Ashton will be returning to Q-School in 2022 if she wants to be a Tour Card holder in 2022. The Lancashire Rose lost 3-0 to Ron Meulenkamp in the final round one game of the day.

With the first set level at 1-1, Ashton carved out a break opportunity. However, she squandered five darts at double, allowing The Bomb to hold. This proved to be the catalyst for Meulenkamp, as he went on a six leg winning streak, going 2-0 up in sets in the process.

The Dutch player then missed nine darts on the outer ring in the second leg of the third set. Ashton chipped away at her score, and eventually hit double five to level the set at 1-1. It did not turn into a comeback though, as Meulenkamp hit 90 and 57 outshots to complete the victory. He’ll play Michael Smith on Tuesday 21 December.

William O’Connor nearly joined Ashton in an early exit. He let a 2-0 lead against Danny Lauby slip, before winning the match in a last leg decider.

The Magpie looked in control in the first two sets, winning both of them 3-1 and averaging over 100. However, checkouts of 116 and 117 saw Lauby cut the deficit to 2-1, taking it against the darts. O’Connor then missed four match darts in the fourth set, but a 121 outshot, followed by a 41, brought the young American level.

Both held twice in the fifth set, setting up the deciding leg. The Magpie squandered two at double 16, while Lauby missed double 18 for a second 121 which would have completed a fabulous comeback. Finally, at the sixth attempt, the Irishman got over the line, finding tops to end a fabulous game in which 10 180s were hit. O’Connor faces Glen Durrant in the afternoon session on Wednesday 22 December.

What else happened on day two of the PDC World Darts Championship?

Steve Lennon beat Madars Razma in the opening match of the day. The opening two sets were shared, before Lennon took out 15 on double one in the deciding leg of the third set.

Two breaks, followed by two holds, forced the fourth set into a fifth leg. Both missed darts for it, but Lennon pinged double four to come through 3-1. He faces Krzysztof Ratajski in the final game of tomorrow’s afternoon session.

Scott Mitchell became the first player on the Pro Tour Order of Merit to be defeated in round one. He missed his first 14 attempts at a double, eventually finishing 2/16, as he lost to Dutchman Chris Landman 3-0. Landman hit three maximums in debut on the Alexandra Palace stage, and plays Ian White in round two on Saturday afternoon.

Ryan Meikle defeated Fabian Schmutzler 3-0 to move closer to keeping his Tour Card. The 16 year old German impressed in patches, hitting three maximums in his first game at this event. However, Meikle hit five 180s himself in the process, winning the match on double five. The Barber now has a match against 2020 World Champion Peter Wright in Friday’s evening session.

Chas Barstow continued his excellent year, after he made this tournament without winning a Tour Card. He hit 52 and 102 outshots to go 2-0 up on John Norman Jr, and despite the Canadian pulling a set back, Barstow found double 18 in the fifth leg of the four set to complete a 3-1 victory. The Englishman will take on three time World Champion Michael van Gerwen in the final game on Saturday night.