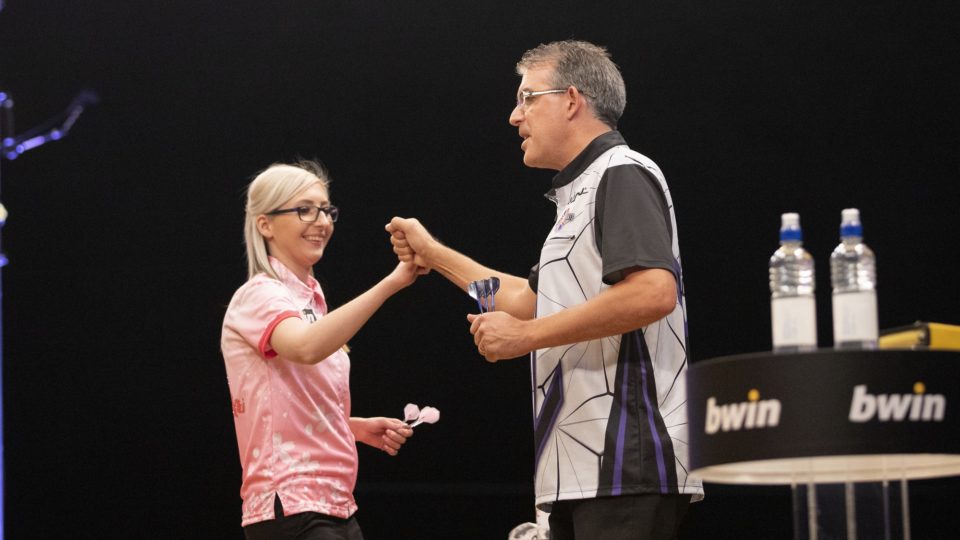 Duzza get revenge over van den Bergh, as Smith recovers to beat Sherrock.

Jeff Smith dash Fallon Sherrock hopes in the World Series of Darts finals, as the Canadian rallied from 5-1 down to break Sherrocks heart to win 6-5 in a last-leg decider. For the first half of the match, Sherrock was fantastic showing the form the world championships back in December. As the game went on a lack of match practice was begging to show, and Smith grew into the match. Sherrock would miss four-match darts across two legs. Smith saved his best leg till last as he won five legs on the spin to seal the victory.

Smith will now face world number 8, James Wade in the second round of the World Series of Darts final.

“I feel like I should have lost that game, but I’m still here,” said Smith. “To be honest, I was the second best player in the match.

“I got in the way of myself a little bit. I had a bad Autumn Series, and my confidence was low, but I’ll take the win. Hopefully tomorrow I’ll be better again.

“Fallon came at me hard, and I was looking to respond. She was the one that let me off in that match, and she’s a credit to the game.”

The event in Salzburg had 1000 fans in attendance for the first time since the global lockdown. The fans in the Salzburgarena gave the arena a fabulous atmosphere again, as the player followed with some outstanding performances.

Demon Heta headed into his match with Ian White as one of the form horses; the Australian won his first ranking title at the Autumn Series last week. Heta won the Brisbane Darts Masters in 2019, and his now finding his feet on the tour.

Heta found himself in plenty of trouble 3-1 and 4-2 down. White would miss two match darts and was made to pay for his costly misses. With the score at 5-5 Heta produced a 14 dart leg to steal the victory.

“I have had a good week. I really enjoy the stage, but tonight was a different feeling, and maybe I did put pressure on myself.

“I know Ian and he’s a much better player than that, but I’m happy to take the win. I needed the 108 finish and it put me in good stead going into the last leg.

“Hopefully I’ll relax against Peter Wright and I can go in with a different frame of mind. He’s smacked me before in New Zealand but I’m going to bring my A-game and we’ll see what will happen.

“I’ve just got to take every game as it comes but I’m buzzing and I want to keep doing better.”

The first mini-session went with throw as van den Bergh lead Durrant 3-2. After the break, Duzza went into overdrive as he reeled off four legs on the spin as the Matchplay champion didn’t have the answers.

“That’s a good win,” said Durrant. “It’s no consolation for the World Matchplay, that game broke my heart, but I’m pleased with that win.

“I knew what the carrot was tomorrow, MvG, and it’s a huge game. He’s the best player in the world and it’s the biggest challenge as a darts player.

“He’s got to play well to beat me tomorrow night. I’m up for this. I feel good, I feel strong and I’ve love to win this tournament.”

Mensur Suljovic had home hopes resting on his shoulders, and for the first half of the match, he was up to the challenge. Krzysztof Ratajski then sprung into life and ended home hopes. As the Polish Eagle went on the rampage, which included a stunning 144 finish.

“I’m very happy,” said Ratajski, who averaged almost 100. “I never give up and I always fight, so I feel great, like always when I win a match.

“Here it was very important because it’s a major tournament and I took small revenge because I lost to him in this tournament last year.

“Of course, the crowd was with Mensur but after such a big break it’s something special to have a crowd.”

The shock of the round saw Cody Harris send Dave Chisnall packing. Chizzy was very much out of sorts, as he went down 6-2 without a fight.

“Taking that win is a big step,” admitted Harris, who was playing his first competitive game since March’s UK Open. “We all know what Chizzy’s capable of and on his day it could have gone the other way.

“I’ve beaten him twice now but I wouldn’t say that I’ve played his A-game yet. I just want to keep playing – I’ve been really hungry to play darts all year and I just wanted to get back up there.”

The Dutchman opened with a 13-darter and punished missed doubles from his opponent in the next three legs to move 4-0 up, before legs of 13 and 14 darts completed a dominant display.

“Joe was really struggling and you have to take advantage,” said Van der Voort. “The game is brutal and I’ve done that.

“As long as I’m playing well I know that I can do damage to any player in the world. It’s all about me. I’m playing better than I have for a long time but I have to prepare myself.”

The popular Dutchman added: “To play in front of a crowd makes you feel really good. People love coming to darts and I think people are blessed to be here.”

Darius Labanauskas won the tournament’s opening fixture with a 6-2 defeat of Harry Ward, The Lithuanian won the opening leg with a 120 finish and never looked back from that moment, as Ward struggled to get into the match.

Labanauskas closing out a 6-2 victory with a 91 average to progress to a tie with Nathan Aspinall.

Labanauskas was a World Championship quarter-finalist in December, and admitted: “After Ally Pally I haven’t had a lot of tournaments on the stage but I’m feeling good. I was comfortable tonight.”
Veteran star Steve Beaton, one of last weekend’s four qualifiers, ended the hopes of Australian ace Simon Whitlock in a thriller to end the opening night.

Whitlock’s early 120 finish to lead 2-0 was cancelled out by a 104 checkout from Beaton as the 56-year-old moved into a 4-3 lead, and he repeated that combination to move to the brink of victory at 5-4.

Whitlock then took out 108 to save the match in leg ten, but missed the bull for victory in the deciding leg as Beaton returned on double 12 to move through to a tie against Rob Cross.

“I’m looking forward to playing Rob because the biggest hurdle was the first round,” said Beaton. “I can relax now and play my game. “It’s funny to be back in front of a crowd and it will be great tomorrow.”