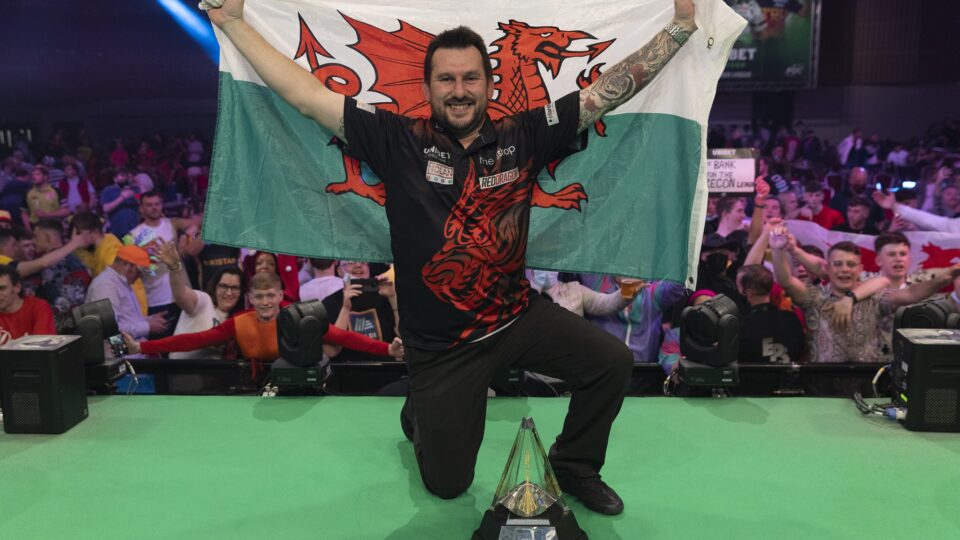 On Sunday 4 April 2021, if you’d said that a Welshman was going to win the 2021 Premier League Darts, not many people would have been too surprised.

However, if you’d kept that prediction after Gerwyn Price tested positive for COVID the next day, there might have been a few eyebrows raised.

Yes, Jonny Clayton had been in a bit of form. A World Cup winner with Gerwyn Price in November. A winner on the Pro Tour a couple of times. Winner of The Masters in January. But, winning the biggest non-ranking title of all? On your full league debut? Surely not.

Turns out, they were right. Like Glen Durrant last year, The Ferret won the Premier League at his first attempt, overcoming both Michael van Gerwen and Jose De Sousa on Finals Night. In many ways, Clayton’s win personified his remarkable six months.

That might seem silly to say, but it’s probably the biggest improvement in The Ferret’s game over the last few months.

If the field had not been expanded at The Masters, he would not have had a chance to be in this tournament. In that title run, he won three last leg deciders, including coming from 9-6 down to beat James Wade in the quarter finals, hitting 10 out of 11 doubles. Pressure? What pressure?

Leading the way in this Premier League after night five, a couple of defeats in the final week saw the Welshman face Dimitri Van den Bergh on the last night of league action for the final spot in the Play-Offs. There, only needing a point to qualify for the Play-Offs, he won 8-6 in a very tight game to clinch fourth. Pressure? What pressure?

So, to Finals Night itself. Van Gerwen stood in his way in the last four, a man who had played seven Premier League semi finals, and won all seven. Clayton went into the lead, before MvG pulled it back, and a great game was level at 8-8 heading into the final three legs. Against the throw, Clayton found an 11 darter to break, and then hit a magical 124 in the next leg to seal a place in the final. Pressure? What pressure?

De Sousa in the final awaited, a man who’d hit 89 maximums in the tournament up until that point (and ended up with 96, easily the record for what it’s worth). After a slow start, seven straight breaks of throw followed. Whoever could hold their throw would more than likely win the final, and Clayton did so in the 14th to go 9-5 up. Two legs later, he hit double eight, and capped off a remarkable rise with the title.

In the pressure cooker moments, The Ferret delivered. And then some.

Clayton “is in the conversation for best player in the world”

In this tournament, Clayton’s scoring power has been there for all to see, averaging just under 100. He’s won over 50% of the legs he’s played, and hit 59 180s.

He was also one of two players to hit a magical nine darter, the other being fellow finalist De Sousa.

The only real weakness in his game is that, sometimes, his doubling can go a little bit astray. 40% on the outer ring this tournament is not bad, but if he pushes it to around 50% per tournament, with the scoring power he possesses, this will not be his last TV title.

Since winning the World Cup in November, no one has won more PDC titles than Clayton. For that, on form, he’s in the conversation for the best player in the world. After fellow countryman Price won the World Championship, two parts of the so-called “Triple Crown” have gone to Wales. Would you bet against one of them winning the World Matchplay in July? On this form, it’s hard to.

This is even more remarkable when you consider that The Ferret is still a part time player. He works in Carmarthenshire as a council plasterer, but he’s said in interviews this week that if he did win the title, he’d think about giving up his job. If he keeps winning titles though, the decision will be made for him, due to the number of events will be involved in. He’s also not yet a seed for the World Matchplay in July, although that will surely change in the next Super Series events.

The last player originally into the Premier League Darts field. The last player to qualify for the Play-Offs. The first player ever to finish fourth, and lift the trophy on Finals Night.

Jonny B Goode? No. Jonny Is Great.