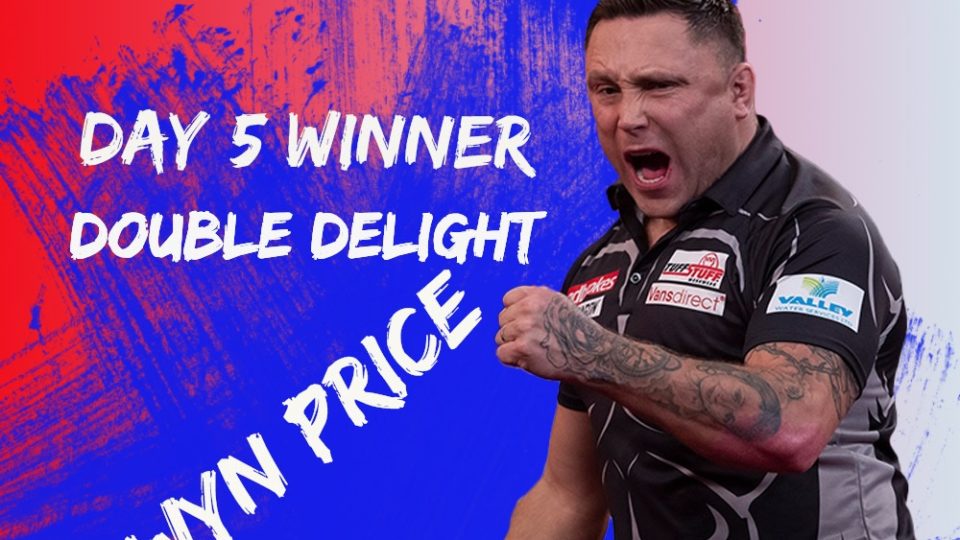 In comparison to yesterday, Price averaged over 100 in every game bar the final, in which he defeated Krzysztof Ratajski 8-5.

It sees Price tops the Autumn Series Order of Merit, and secures him back to back Pro Tour titles for the second time in his career.

Yesterday, Price flew under the radar before taking advantage of missed match darts from Devon Petersen in the final to win his 12th PDC title. Today, it was unlucky 13 for everyone The Iceman played.

After receiving a bye in round one due to Andy Hamilton pulling out, he made up for it in round two. Down 3-0 to Vincent van der Voort, he won six of the next seven legs to take a 6-4 victory, averaging 106.3 in the process. He then defeated Madars Razma 6-3 with a 103.5 to win board one.

The number one seed though was on a mission to finish top of the Order of Merit. After beating Chris Dobey 6-2 in round four, averaging 103.0, he then broke the James Wade throw in the final leg to win 6-5 with a monster 107.4 average. That was the victory that saw him be number one this week, going ahead of Michael van Gerwen after he lost 6-3 in the quarter finals to Jose De Sousa

Price continued to be in full flow, winning 7-3 against De Sousa with a 104.5 average. That set up a final against Ratajski, as he looked to win two straight Pro Tour titles for the second time in his career. After Price held throw to lead 1-0, the next nine legs saw nine straight breaks of throw.

The turning point of the final came in the 10th leg. After Ratajski had left 82 after 9, he missed seven darts to win the leg and level the match at 5-5. Price then cooly hit double 10 for an 18 dart break to go 6-4 up, which broke the Polish Eagle’s spirit. That was to be the last break of the contest, as Price held throw twice to win day five of the Autumn Series 8-5 and take home his 13th PDC title of his career.

Polish Eagle soars under the radar

Krzysztof Ratajski made his second Pro Tour final of the year, but it was far from expected with his performances today. He began with a 6-2 win over fellow countryman Krzysztof Kciuk, averaging 103.2 in the game. A 6-2 win against Adrian Gray, and a 6-3 victory over Peter Jacques saw the Polish Eagle win his board.

Ratajski then hung in games, and found the crucial shots to win them. He beat World Matchplay champion Dimitri Van Den Bergh 6-4 in the last 16, before beating Simon Whitlock 6-0 in the last eight to end the Australian’s hopes of qualifying for the World Grand Prix.

In the semi final, Ratajski faced Brendan Dolan, and withstood a scoring barrage from the Northern Irishman in the early stages. Dolan was averaging 114 at one stage, but Ratajski cooly grew into the contest and won four straight legs in the middle of it, effectively sealing his place in the final.

He eventually came through 7-4 against the History Maker to set up the final against Price, where again he hung in. This time though, he could not hold his throw when breaking at crucial moments, the 10th leg being the deciding factor. Still though, making a final will give Ratajski confidence heading into the World Series of Darts Finals this weekend, where he faces Mensur Suljovic in round one.

Elsewhere on day five of the Autumn Series, good runs from De Sousa and Dolan saw them all but secure their World Grand Prix qualifying spot. However, the surprise run of the day goes to Matt Clark, who made his first Pro Tour quarter final in nearly eight years.

Another player who made the quarter finals was Simon Whitlock, who was looking to make a Pro Tour final to qualify for the Grand Prix. Sadly, The Wizard left himself too much to do, and cannot qualify for the event in Coventry, along with the likes of:

Damon Heta lost in the first round on day five of the Autumn Series, and dropped out of the qualification spots. He will not be at the Grand Prix, as he, like those above, did not qualify for the Euro Tour event in Germany next week.

However, Heta will be at the Grand Slam of Darts in November. As the top three in the Autumn Series Order of Merit are:

They’ve already qualified for the event. As such, the spot goes to the player next highest in the ranking, which is Heta.

Finally, congratulations to Devon Petersen, who hit a nine darter in his second round loss to Dimitri Van den Bergh.

Gerwyn Price received a bye to round 2, as Andy Hamilton withdrew from the tournament.