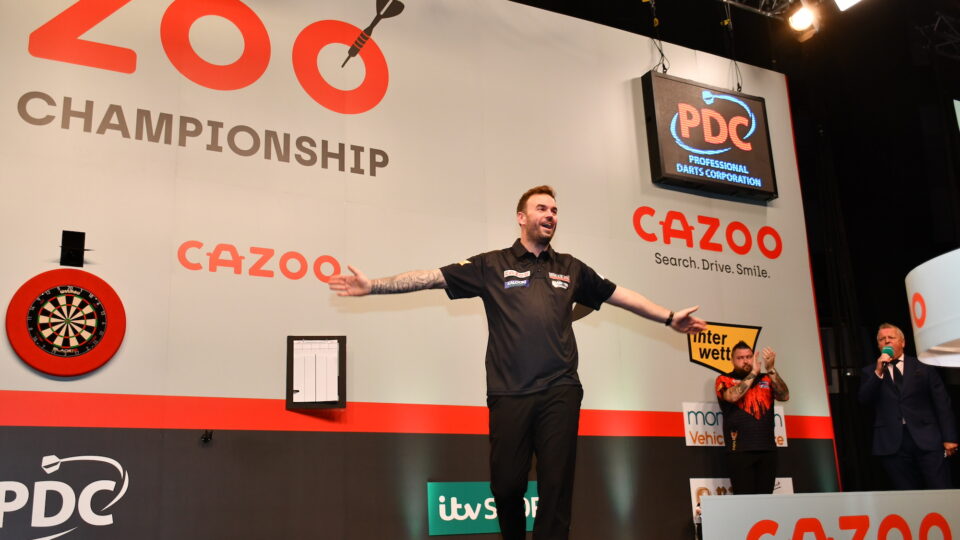 In his first ever major final, Ross Smith secured a first televised title in the finale of the European Championships in Dortmund with a stunning victory against a luckless Michael Smith.

An action packed finale at Westfalenhallen saw Smith picking up the 120k first prize and the ultimate crown for this year’s European Tour.

Story of the final

Smudger was out of the traps incredibly quickly in the final, pinning 133 for a 12 dart break and 121 for a 15 dart save. When he broke again in 17 the game was threatening to get away from Bullyboy in double quick time. A 14 darter retrieved one break and a 12 dart hold provided all the momentum heading into the first break despite the narrow deficit.

The second session produced another 12 darter against the throw and suddenly the final was level. Unfortunately for Michael, whatever the script was, Ross hadn’t read it and he returned a stunning 11 dart break and a 16 dart hold to move out by two again. After holds in 13 and 12, Smudger produced a 4th ton plus finish of 107 to break yet again and extend out to three legs ahead. The next 3 legs also went against the off, to leave the score poised 8-6 in Ross’ favour.

4 consecutive holds put Smudger just 1 leg away, the only sniff for Bullyboy being a solitary dart at a 112 combination falling low on tops for 9-9. At 10-8, Ross produced a supreme leg against the darts leaving 90 after just 9 darts, after missing bull to win in 12, Michael slipped in 1 on a 117 out shot to leave Smudger needing just 25. He did not let the expectant crowd down as he pinned double eight with his 3rd dart to seal the title.

Following the final Ross said how important the words of Peter Wright were, against whom Smith produced a remarkable 7 leg burst to win 10-8 from 8-3 behind, “He immediately said to me, focus, you can win this! For that to come from him means so much, what a lovely guy. He didn’t have to say that and it gave me so much confidence.” Smith sealed his final slot by taking advantage of a sloppy start from Chris Dobey, falling both 5-0 and 9-5 down, he was never quite able to restore parity, though he did ultimately miss darts for a decider in an 11-9 loss. Dobey had earlier ended Dave Chisnall’s campaign with a record 12 180’s in a 10-7 victory.

Michael made his way to the final with dominant displays against Dirk van Duijvenbode, who had earlier reeled off 8 consecutive legs to defeat compatriot Danny Noppert 10-3, and earlier taking out number 1 seed Luke Humphries, reeling off 5 successive legs to take a 10-7 victory. His win over The Titan in the semis coming 11-7 with an average in excess of 103.

An exceptional weekend for Michael Smith ultimately came up just short as his ongoing wait for a televised title threatens to stretch into a 6th calendar year following his first attempt of 8 in 2018. It still feels a case of when rather than if and if there is any consolation to be had, this time Bullyboy maintained a 100+ average and 47% at the double, it was in sharp contrast to the dismal UK Open loss where he averaged barely 90 and folded in the closing stages. A performance like this suggests he could win any of the 3 remaining opportunities this season and who would bet against it being the biggest of them all.

For Ross, it is a case of where he can push his game to next, this major win has probably come sooner than expected in his development and his nerveless display in the final will have sent shockwaves around the top end of the PDC as he withstood everything Wright, Dobey and Smith threw at him to secure a first televised title in his maiden televised final.  He looks secure in his throw and equipment, becoming the first to get over the line using the increasingly popular all in one setup behind the barrel. Can he push on and secure more titles before the year is out? Can he get in the mix for the Masters? The top 16 is now in striking distance with the money still to play for this year.