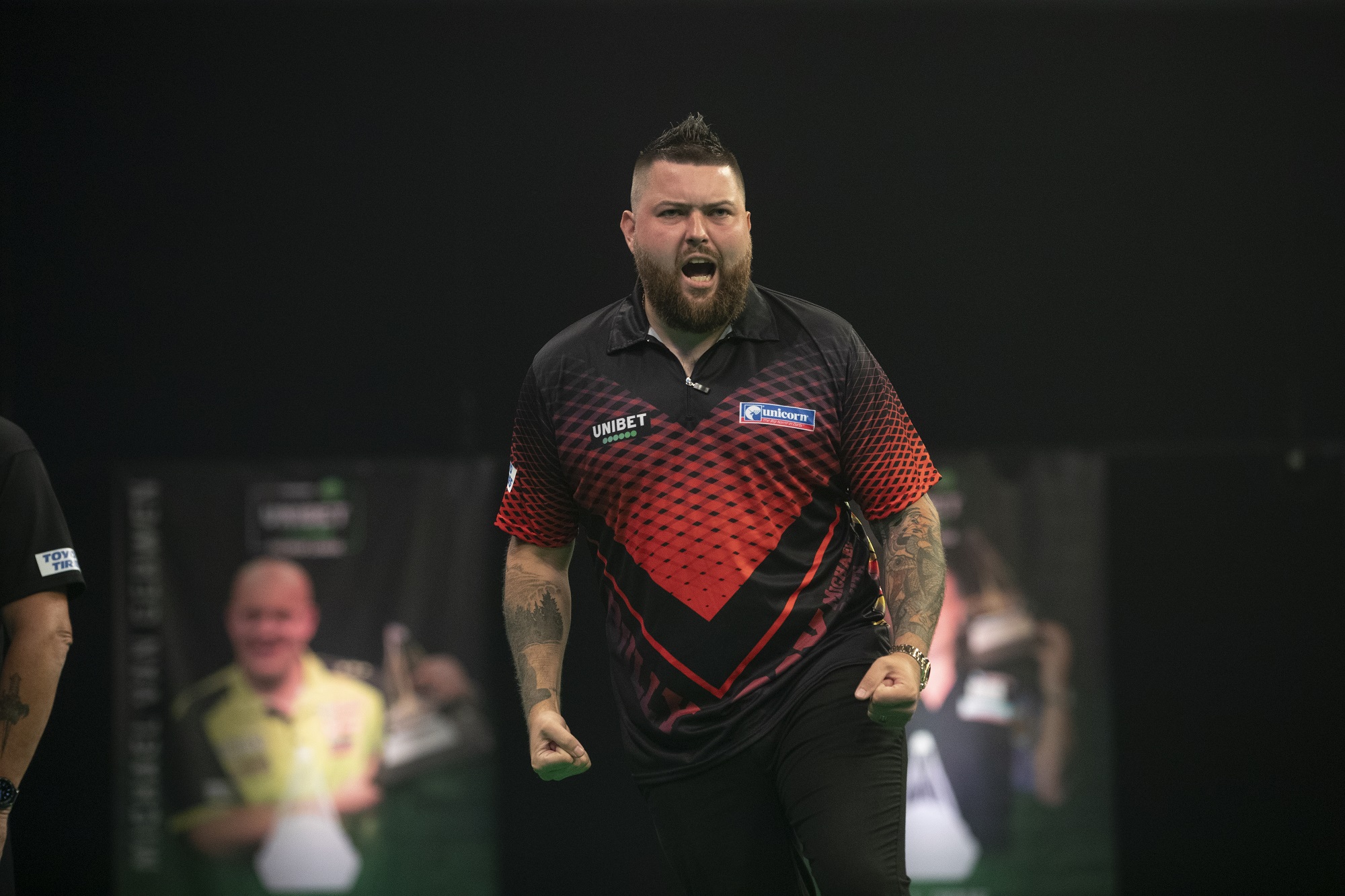 Michael Smith won his first title of 2021 on day two of the PDC Super Series.

On a day of surprise runs, the Bully Boy, who won back to back titles at the Winter Series last year, came through 8-5 against Ross Smith in the final.

It pushes the St Helens native closer to Dave Chisnall on the Order of Merit, and is potentially one tournament victory away from going sixth in the world.

For Smudger, it all but seals his debut appearance at the World Matchplay.

After losing in the last 32 yesterday, Smith was determined to do better on the second day in Germany.

He saw off Geert Nentjes, Luke Woodhouse and William O’Connor to win his board, followed by a victory over Dimitri van den Bergh in the last 16 averaging 114.5. A 105.1 average saw him beat Martin Schindler in the last eight, followed by a win over Aaron Beeney in the semi finals to secure his spot in the final.

Ross Smith had to beat Steve Brown, Lewis Williams and Danny Noppert to win his board, averaging 105.3 against Noppy. He saw off Rowby-John Rodriguez in the last 16, before becoming the first player to beat Jose De Sousa in Germany this week in the quarter finals. A comfortable win over Berry van Peer saw him into the final.

Bully Boy started well in the final, going 1-0 up, before missing a chance to break and go 2-0 up. Smudger levelled up by hitting double nine for a 1-1, but this was the closest that anyone got to breaking in the first eight legs. Both held comfortably on their throws, as the match moved to 4-4.

Michael Smith who held in the ninth leg with an 11 darter, before missing a dart at tops to get a break. Ross Smith, who’d missed bull for a 121 the previous visit, cleaned up 25 to level again at 5-5. Roles reversed in the 11th leg, as Ross Smith missed a dart at tops to break, and Michael Smith held throw with a stunning 130 checkout to lead once more.

The crucial break came in the 12th leg. A stunning leg from Smith saw him leave 90 after nine, and he took it out to go within one of the match. He then hit double 10 for a 21 dart hold, to wrap up the victory.

Although losing to eventual winner Smith in the semi final, it was easily Aaron Beeney’s best day as a tour card holder. Wins over Rob Cross in round two, and Raymond van Barneveld in the quarter final, saw him reach the last four before losing out.

Berry Van Peer, who famously suffered from dartitis on the Grand Slam of Darts stage a few years back, also produced a magical run. He over came Jelle Klaasen and Dave Chisnall en route to the last four, before he lost to Ross Smith.

Elsewhere, Barney’s run to the last eight has helped him back into contention for the 2021 World Matchplay. Steve Lennon also made the quarter finals today, which sees him be the nearest challenger to the qualifying spots. He’s £1,500 behind Darius Labanauskas.

View the race to the World Matchplay here.

Elsewhere, there were a number of high profile casualties in round one, including Devon Petersen, Ian White and Mensur Suljovic. Michael van Gerwen made it past the first round today, but lost in round two to William Borland.

Finally, both Jose De Sousa and Stephen Bunting hit a magical nine dart leg. De Sousa struck perfection against Jermaine Wattimena in round four, while Bunting hit the nine to win his second round game against Ron Meulenkamp.

View the full results for day two of the PDC Super Series here.