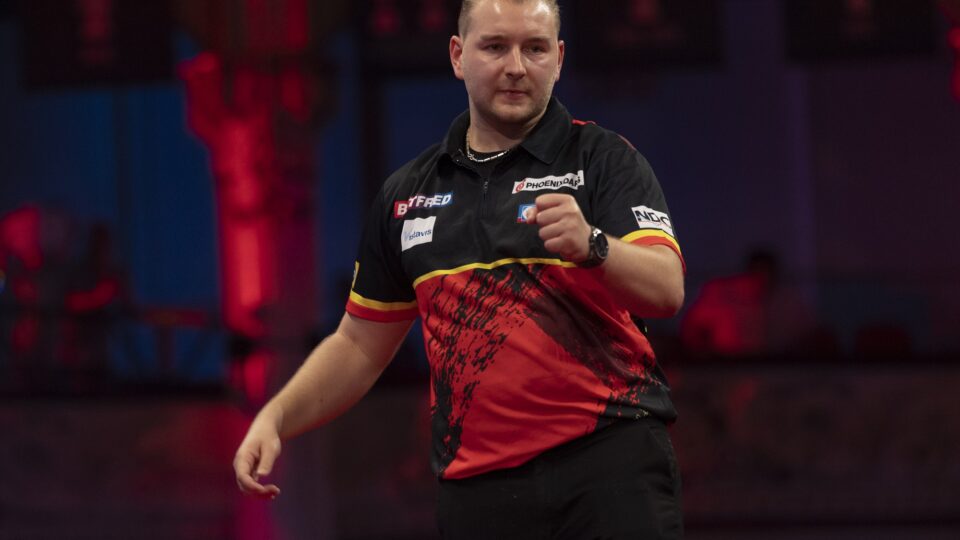 The Dream Maker was sensational, winning seven of the last eight legs to comfortably win 16-9.

He will play Krzysztof Ratajski in the last four on Saturday night, after The Polish Eagle beat Callan Rydz to reach his first ever PDC TV semi final.

In a game full of incident and drama, The Dream Maker punished Price’s poor doubling hitting to make the last four. The Iceman ended the game 9/35 on the outer ring.

Three holds saw The Iceman lead 2-1, before he missed two darts to turn it into a 3-1 advantage. Van den Bergh, who’d missed six darts himself to win the leg, eventually found double 12 to level at the seventh time of asking. Price then missed four to hold again, and The Dream Maker punished. He hit a 96 shot for the first break of the match, taking a 3-2 lead at the first interval.

Van den Bergh took advantage of missed doubles from Price in the next two legs, going 5-2 up after the interval. A 15 darter saw him go further clear, before he missed three darts across the next two legs. Price hit tops, followed by a 59 shot, to get the game back to 6-4, whipping the crowd up in the process.

The Dream Maker came out of the next interval firing, breaking The Iceman’s throw in 11 darts, before holding in 14. However, after a Price hold, he then missed four darts to regain a three leg lead. The World Champion hit double 10, before taking out 46 to hold and get the game back to one, celebrating by dancing like Van den Bergh.

However, it did not deter the defending champion. Both found 13 dart holds, before the Belgian took control. A 12 darter, followed by a 14 dart break, gave the Belgian a three leg lead again. He then hit a 90 on the bull, before hitting double 18 to go 13-8 in front.

A 14 darter saw him move two away, which he followed with a 16 dart break, after Price missed six darts at a double to stop the rot. He then missed a dart for the match, as Price hit tops to extend it. It did not spark a comeback, as Van den Bergh hit a 68 outshot to complete the win and secure a return to the semi finals.

Krzysztof Ratajski was the other victor on night six of the Betfred World Matchplay. He beat Callan Rydz 16-8 in a fairly one sided game.

The Polish Eagle started the match brighter. After missing three darts to break in leg one, and holding in leg two, he finally got the break he deserved in leg three. He left 41 after nine, before hitting double 16 for a 12 darter. Both held once more to make it 3-2 to him at the first interval.

A 116 from Ratajski gave him the sixth leg, before another 41 outshot got him a break. After holding again, he then missed three darts to move 7-2 ahead. Rydz, who missed six darts himself in the leg, eventually found double 16 to get a third leg. He could not break in the tenth though, as The Polish Eagle hit double four to move 7-3 in front at the second interval.

Four holds followed, including a 105 checkout for Ratajski, before the Polish further increased his advantage, hitting double six to move 10-5 clear at the third interval. Despite missing four for the next leg, he hit double ten to go six in front, as Rydz missed double five for a 130 outshot. The Polish Eagle broke twice, but so did The Riot, meaning it was 13-7 to Ratajski at the fourth interval.

An 11 darter, followed by a 141 in the next, put The Polish Eagle one away from the match. Rydz held, but it only delayed the inevitable, as Ratajski hit double eight to make his first ever PDC TV semi final.