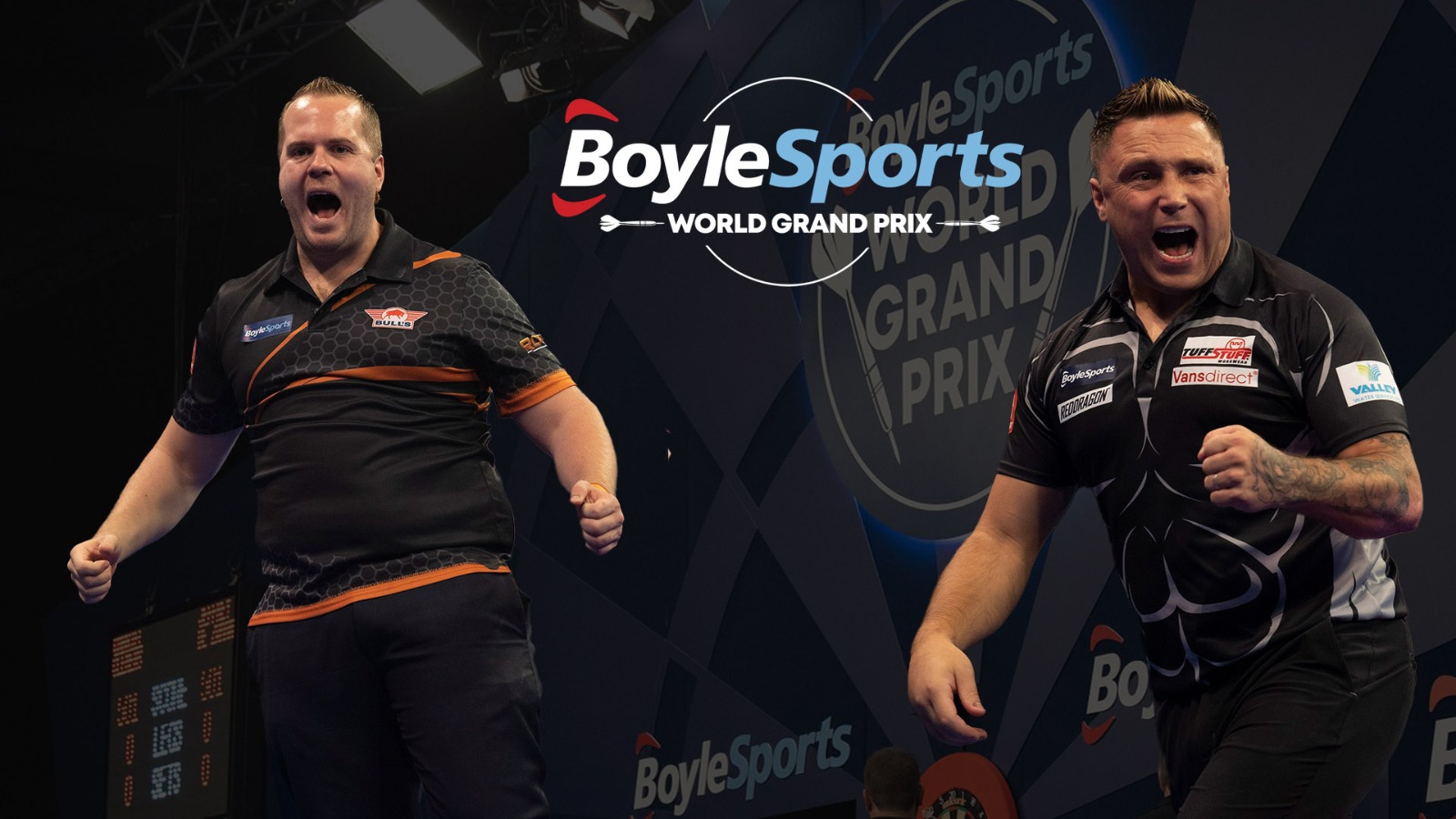 Dirk van Duijvenbode and Gerwyn Price will face each other in the 2020 BoyleSports World Grand Prix final.

It was a more comfortable evening for van Duijvenbode, as he beat Simon Whitlock 4-1.

It will be the first time that either has played in the World Grand Prix final.

The first set was a sign that this game might go the distance. Despite Chizzy having chances to break the Price throw, the set was level at 2-2 going into the deciding leg. There, Price produced the best scoring leg of the set, winning it by hitting double tops for a 13 dart hold to go 1-0 up.

Chisnall came fighting back in the second stanza, winning the first leg after both players missed multiple darts. That seemed to inspire the last year’s finalist, as he broke the Price throw in the next leg, and wrapped up a whitewash second set with double 16 to hold in 15 darts, levelling the match at 1-1.

Chizzy continued his good form at the start of the third set, winning the first two legs despite busting 88 in the second. However, Price was determined to not let him get away, and won two legs on the spin himself to level the set at 2-2. In the deciding leg, Chisnall went inside on double 10 for a 128, leaving Price to hit double six for a 15 dart hold and a 2-1 lead.

The fourth set had just as much drama. Both players held their throw, and then broke each other’s throw, to once again force a deciding leg at 2-2. There, Price once again found a 13 darter, including a maximum, to break the Chisnall throw for a 3-1 lead.

The Welshman was seemingly on course for the final, before Chisnall fought back for the third time this week. After both held throw in the opening two legs of the fifth set, Chizzy would break the Price throw on double six for a 2-1 set lead. He then wrapped up the set with a double 18 to cut the gap to 3-2. Both players held throw at the start of the sixth, meaning Chisnall lead 2-1 going into the fourth. There, he capitalised on a double seven miss from Price, finding double ten to win the set 3-1 and level the match at 3-3.

The deciding set produced even more stunning drama. Chisnall broke throw in the first leg, after The Iceman missed four to hold. Price would not let it bother him though, finding a magical 130 outshot on the bull to get the break back. After both held throw once more, it meant the match would be decided in a final leg shootout. There, Chisnall produced a 180 and 138 to leave him 68 for the match, but missed three darts across two turns to complete another stunning comeback. Price would punish him, hitting double 12 for a 56 checkout to win the match 4-3 and end a game of the tournament, and year, contender.

Dirk van Duijvenbode was 200-1 before the tournament started to lift the trophy. He’s now one win away, thanks to a stunning 4-1 win over Simon Whitlock.

The first set showed a sign of things to come for the Dutchman. After holding throw, he capitalised on a double 18 miss from Whitlock to find double 16 and break the Wizard’s throw. He then wrapped up the first set with a double 10 shot, taking just 49 darts to go 1-0 up.

Whitlock noticeably tried to slow the pace of the game down in the next set. After both players held throw in the opening two legs, the Wizard held again to go 2-1 up. In the next leg, van Duijvenbode missed tops to level the set, and the Australian found a 92 outshot on double 16 to win the set 3-1 and level at 1-1.

Whitlock continued to use this tactic in the next set, but it would backfire this time around. He missed two darts to break the van Duijvenbode in the first leg, before he was broken in the second leg to trail 2-0. It was to be a similar story in the third leg as the first leg, as the former finalist missed another two to get the set back on throw. Eventually, the Dutchman would find double 20 for a 26 dart hold, and a whitewash third set to lead 2-1.

A ten dart break for van Duijvenbode in the first leg of the fourth was cancelled out by Whitlock in the second, finding double 16 to level at 1-1. The debutant would not relent though, finding double four for another break, and then producing a 13 dart hold on double 18 to take the set 3-1 and go 3-1 in the match. van Duijvenbode would then end the match similar to how he started, producing a comfortable whitewash set in 43 darts to win 4-1 and reach the 2020 BoyleSports World Grand Prix final.

How can I follow the World Grand Prix final?

The BoyleSports World Grand Prix final will be live on Sky Sports in the UK. You can watch it outside the UK via the PDC’s broadcast partners, such as RTL or DAZN.

You can also live stream the match. Find out more here.

We’ll have you covered here at Online Darts, with reaction with the winner of every game direct from Coventry. Head over to our YouTube channel and hit subscribe so you do not miss it.

Follow all the drama of the final with us at Online Darts.