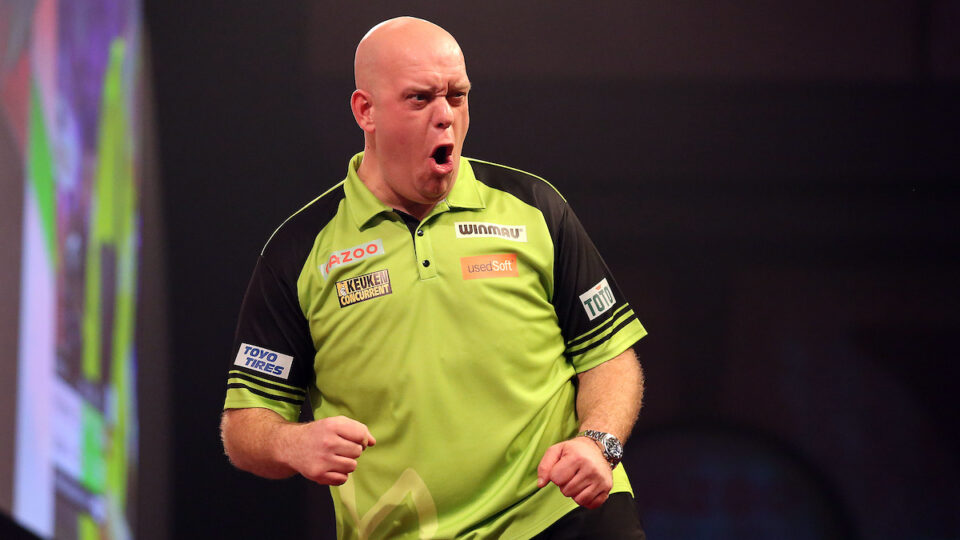 MvG, who last won this title in 2019, beat Mensur Suljovic 4-2 in a breathtaking game of quality and drama.

For Grand Slam champion Smith, he had to fight back hard against Martin Schindler, coming from 3-1 behind to eventually win 4-3.

Elsewhere, Joe Cullen won 4-0 against Damon Heta in the opening game of the evening session, while the afternoon session was full of comebacks. Chris Dobey, Jose De Sousa and Alan Soutar all fought back from behind to move into round four.

The headline act on night 11 was Van Gerwen and he and his opponent Suljovic delivered an instant classic.

The first set went to a decider, where MvG found double six to go 1-0 in front. Suljovic won the first two legs of the second, however, 37 darts later, MvG cleaned up a 64 outshot to double his lead, with a second set average over 120 which included a 101 finish.

The Gentle hit back in the third set. After breaking in leg three, he hit a 170 to leave 51. MvG then missed the bull to reel in The Big Fish himself, allowing Suljovic to check out the 51 to cut the deficit in half. The fourth set went the distance again, but The Green Machine produced a stunning 12 dart break of throw to go within one of the match.

Michael van Gerwen declines a dart at the bullseye and Mensur takes out 161 to clinch the set!

The fifth set also went to a fifth leg, where Van Gerwen did not go for the bull on 121, laying up for 32. Suljovic, left on 161, took out the stunning shot to the delight of the crowd. In the sixth set, both missed darts for the third leg, but eventually MvG cleaned up 20 to break. He then left 46 after nine, and despite missing two, the three time World Champion found double eight to bring a stunning game to a close.

Smith and Schindler followed those two on the oche, and there was plenty of drama in that game as well.

The first set went to a decider, with Schindler leaving 144 after six darts. Despite not hitting the nine, The Wall pinged double four to go 1-0 in front. Bully Boy responded with a 170 Big Fish checkout in the first leg of set two, levelling the match on double eight 30 darts later.

The third set was a set of breaks, as all five legs were won against the darts, with Schindler pinging 88 for an 11 darter to go 2-1 up. Finishes of 84 and 128 saw him move 2-0 ahead in the fourth, before double 14 moved The Wall one away from the contest.

It was another deciding leg in the fifth set, where Smith found a 72 shot to cut the deficit to 3-2. A 13 darter gave the Grand Slam champion a break in the sixth, which he followed up in the next leg on double two to level an astonishing contest and force a seventh and final set.

In it, two 15 darters from Smith gave him a 2-1 lead, before an astonishing fourth leg left him on tops after 12. He took it out, completing a fabulous comeback and booking his spot in round four.

Joe Cullen put in the most comfortable performance of the day, beating Damon Heta 4-0.

With the first set level at two legs all, Cullen hit a 177 to leave double six, which he then hit to take a 1-0 lead. The Heat then missed a dart at double seven to force another deciding leg in the second, allowing The Rockstar to find double three to double his advantage.

The third set again went to a fifth leg, in which Cullen landed the knockout blow of the contest. With Heta trying to hold and get on the board, The Masters champion hit an outstanding 108 checkout to move within one. It seemed to deflate the Australian, as 45 darts later, Cullen pinged double 16 to complete the whitewash.

Chris Dobey went 1-0 down, but won the next four sets to see off Gary Anderson.

Vintage GAndo arrived in the first set, as a 15 darter and back to back 12 darters including a 121 outshot saw him race to the opening set. Before the second set though, Hollywood heard The Flying Scotsman say something to him that spurred him on and it showed.

The second set went to a decider, in which the two time World Champion missed two darts for a 2-0 lead. Hollywood punished, hitting double 16 to level the match. The third set also went to a deciding leg, where Dobey hit a 171 to leave double 18, eventually taking it out to go in front.

Yet again, Dobey was on the right side of the final leg of the fourth set, hitting double 16 to go 3-1 in front. The man from the North East of England then broke in the third leg of the fifth set, before hitting 64 to finish off a massive win. He will play either Rob Cross or Mervyn King Friday night.

De Sousa and Soutar do not give in

Following on from his dramatic comeback against Simon Whitlock in round two, Jose De Sousa produced another at the 2022/23 PDC World Darts Championship, coming from 3-0 down to beat Ryan Searle 4-3.

Despite going for Searle’s score of 102 and busting, De Sousa eventually hit 71 to win the opening leg of the match. It did not matter though, as Heavy Metal reeled off the next three legs to take the opening set. Searle then won the next two sets, taking advantage of plenty of missed doubles from De Sousa.

De Sousa miscounts in the opening leg of the match but the moment of madness goes unpunished and he takes the lead!#WCDarts | R3
📺 https://t.co/37DNuuK5Me pic.twitter.com/3Bskkz1jwl

A 92 outshot from Portugal’s number one extended the match and gave him the fourth set. In the fifth set,  Searle missed a match dart in leg four as De Sousa forced a decider, taking out 64 to reduce the gap to 3-2.

With the score at 1-1 in the sixth, back to back 14 darters saw De Sousa level the match, with three holds in the seventh giving the 2020 Grand Slam champion a 2-1. After both missed multiple darts for the fourth leg, De Sousa eventually hit double two to complete the incredible fightback. He sets up a showdown with Gerwyn Price tomorrow evening.

Noppert won the opening two legs of the match and even though he missed set darts in leg three, he found a lovely 104 checkout to eventually take the first set. It was more clinical from The Freeze in the second set, hitting a 101.05 average to win it 3-0 in 45 darts.

The match however turned in the third set. After breaking the Soutar throw, Noppert missed tops for a 66, allowing Soots to break back and hit 96. From there, the Scot surged to take the third set in 27 darts, and 50 darts later, he hit double two to level the contest having won six legs on the spin.

From there, The Freeze lived up to his nickname, as he won just one of the next seven legs. An incredible 152 with Noppert on 52 gave Soutar the fifth set and 43 darts later, including a 130 finish in the second leg, the Scot hit tops to complete the turnaround. He’ll play Gabriel Clemens for a place in the quarter finals on Friday.