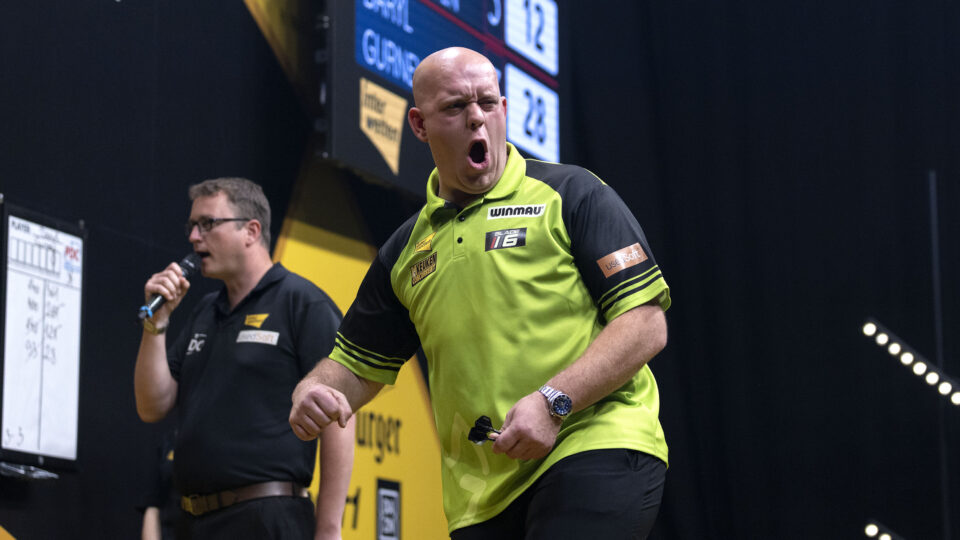 On Saturday, Michael van Gerwen began his quest for a fifth Interwetten European Darts Open title with a thrilling victory over Daryl Gurney, while Peter Wright was eliminated by Scott Williams.

The Dutchman has won the PDC European Tour event four times already, including the most recent two visits to Leverkusen in 2018 and 2019.

He defeated Gurney 6-3 in their second round tie on Saturday night, averaging 113.79 and missing double 12 for a nine-dart finish.

Gurney contributed by sharing the first six legs, and despite Van Gerwen’s near miss for a flawless leg, he had a chance to win the seventh.

The Northern Irishman, though, wired double 14 for a 121 checkout, allowing Van Gerwen back in to complete a ten-darter, and the Dutchman brutally closed out the triumph in the next two legs.

“Daryl pushed me in the beginning of the game,” said Van Gerwen, who has won two of this year’s four European Tour events so far.

“I missed a few darts here and there and that puts you under pressure. I still had a couple of really good legs.

“To be playing back here in Leverkusen is always good. I also want to do well because I think the crowd here deserve it and I need to make sure I keep my focus going. I feel good but tomorrow is another day.”

In the third round on Sunday, Van Gerwen will face Cazoo Premier League table-topper Jonny Clayton in a bid to win another £25,000 prize.

Clayton dominated Rowby-John Rodriguez 6-2 at the Ostermann-Arena on Saturday night, completed six doubles from ten attempts in a dominant performance.

Williams won the biggest match of his career, defeating World Champion Wright 6-4, and advancing to the last 16 in his European Tour debut.

Early on, Wright led 2-1, but a total of 15 missed doubles allowed Williams, the current Winmau Challenge Tour Order of Merit leader, to send the world number one to his third consecutive European Tour second round elimination.

“That wasn’t the Peter we all know, he missed too many darts at doubles, he didn’t score like he could but I won,” said Williams, who now plays another emerging star in 2022, Josh Rock.

“I’m really looking forward to it, regardless of what happens. I’m a Challenge Tour player, not a professional technically, so just to be here for the whole weekend is fantastic. I’m enjoying myself.” 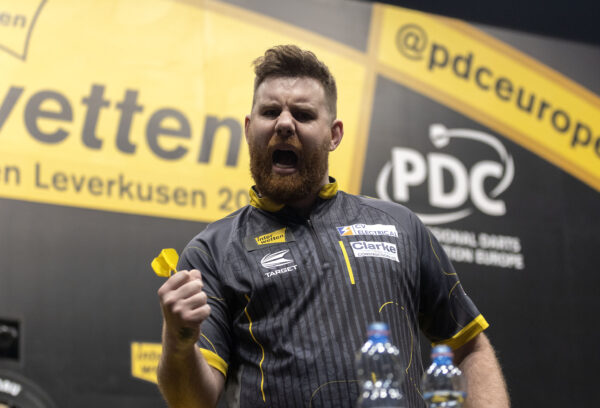 Rock was another standout performer, advancing to the last day of a European Tour tournament for the first time, average 101.68 in his 6-2 victory over Krzysztof Ratajski of Poland.

Top seed Gerwyn Price had to fight back from a 2-1 deficit to win 6-4 against Luke Woodhouse, despite the qualifier having took out 132 as he narrowed the gap from 5-2 to just one leg in the final stages.

Price will face Nathan Aspinall in the third round as the former UK Open winner won 6-2 over Karel Sedlacek with a magnificent 160 checkout.

Brendan Dolan was excellent in a 6-0 thrashing of Andrew Gilding, hitting four 13-darter legs and a 14-darter while averaging nearly 104.

Dolan will face Luke Humphries in the last 16 after the German Darts Grand Prix winner averaged almost 100 in his 6-2 win over Darren Penhall.

In round three, Joe Cullen and Dirk van Duijvenbode will face off after both players defeated Devon Petersen and Maik Kuivenhoven 6-1 on Saturday.

In a 6-1 triumph over Berry van Peer, Premier League standout James Wade ended 6/10 doubles and averaged 102.25 to set up a match with Jose de Sousa, who defeated Sweden’s Dennis Nilsson in a deciding leg.

Ryan Searle dazzled with a 102.60 average in his 6-2 victory over Krzysztof Kciuk, and now faces Dave Chisnall, who rallied from a 4-3 deficit to defeat Damon Heta 6-4 with a 146 checkout.

Martin Schindler of Germany electrified the Leverkusen crowd with a 6-4 victory over European Champion Rob Cross, finishing with a 154 and an 11-darter to advance to the last 16. 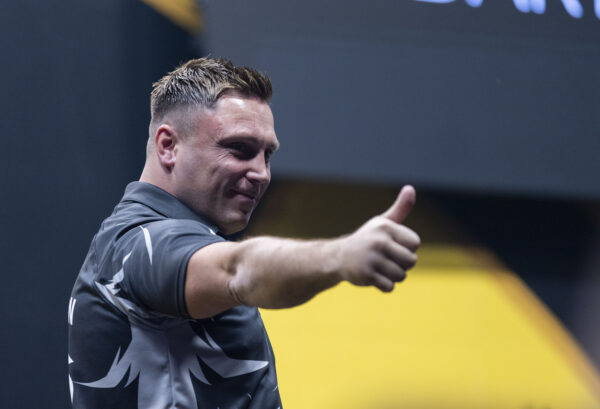