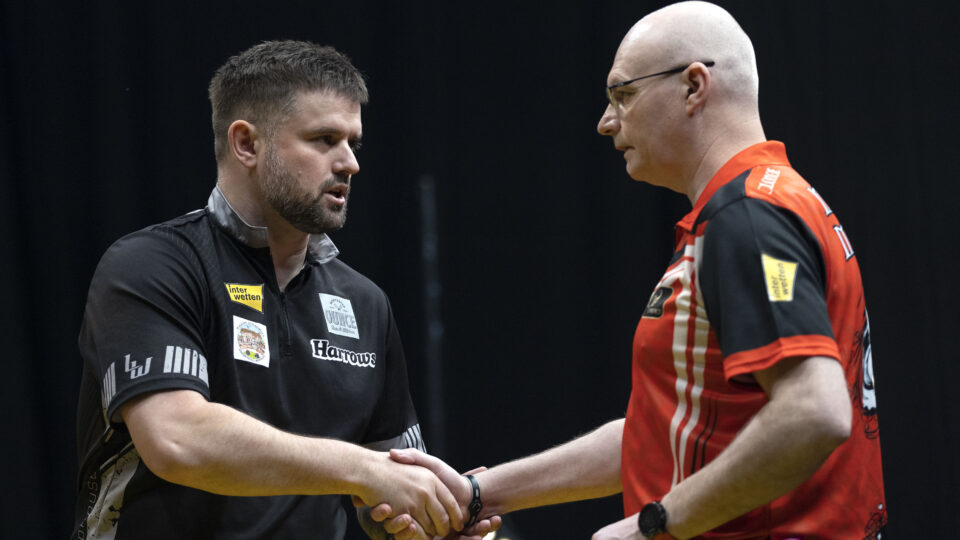 Following a spectacular start to the PDC European Tour event in Leverkusen, Luke Woodhouse has set his sights on a showdown with Gerwyn Price in the Interwetten European Darts Open.

In the standout performance of Friday’s first round at the Ostermann Arena, Englishman Woodhouse set his highest recorded average of 109.98 in a superb 6-0 whitewash of Mickey Mansell.

In a strong performance, Woodhouse finished six doubles out of seven attempts, limiting Mansell to just two doubles as he advanced to a second round tie with top seed Price on Saturday.

“I felt really good,” said Woodhouse. “Practice didn’t go so well, but I felt really comfortable up on the stage and the crowd was amazing – it went really well.

“Obviously Gezzy is an unbelievable player so I’m going to have to perform like that tomorrow then you never know. I’ve got all the respect in the world for Gezzy so we’ll see what happens.”

Runner-up in the German Darts Grand Prix Martin Lukeman’s aspirations of a strong run on the European Tour were dashed with a 6-3 loss to Dennis Nilsson, who will face Jose de Sousa in the second round.

Daryl Gurney won the deciding leg of his tie with fellow Northern Irishman Kevin Burness, advancing to the second round to face Michael van Gerwen.

On Saturday, Scott Williams will face World Champion Peter Wright, who came back from a 5-4 deficit to overcome Czech Republic’s Adam Gawlas 6-5.

With a 6-3 loss to Dave Chisnall, top-ranked German Gabriel Clemens was ousted, setting up a tense second-round match with Damon Heta.

Berry van Peer came back from a 4-2 deficit to upset Jermaine Wattimena 6-4, punishing his fellow Dutchman with 21 missed doubles to advance to the last 32, where he will face Premier League standout James Wade.

Cameron Menzies overcame Ian White 6-3 in their tie, securing a second round match against Dimitri Van den Bergh with a 156 checkout. 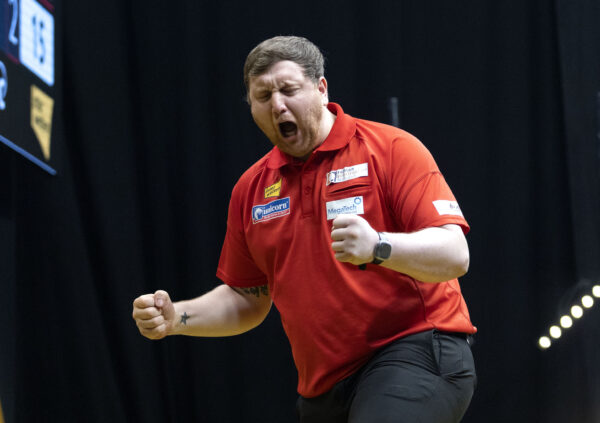 Devon Petersen rallied from a 5-4 deficit to defeat Kevin Doets in a decisive leg, putting the South African in a second-round match against former housemate Joe Cullen, the 2022 Masters champion.

Krzysztof Kciuk punished Keane Barry with 13 missed doubles in a 6-3 victory that earned him a second round match against Ryan Searle, with a 133 finish.

In the deciding leg of their match, Maik Kuivenhoven escaped four missed match darts from Stephen Bunting to set up an all-Dutch final with Dirk van Duijvenbode.

Andrew Gilding came back from a 2-0 deficit to overcome Lukas Wenig 6-3 and advance to a tie with Brendan Dolan, stringing together five legs of between 12 and 15 darts.

Following the withdrawal of America’s Danny Baggish, Karel Sedlacek will face Nathan Aspinall in round two after receiving a bye. 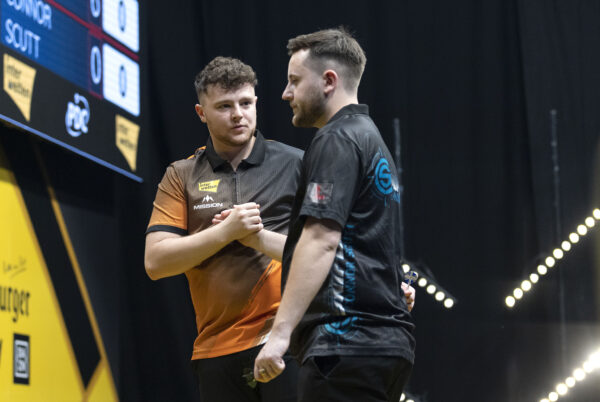