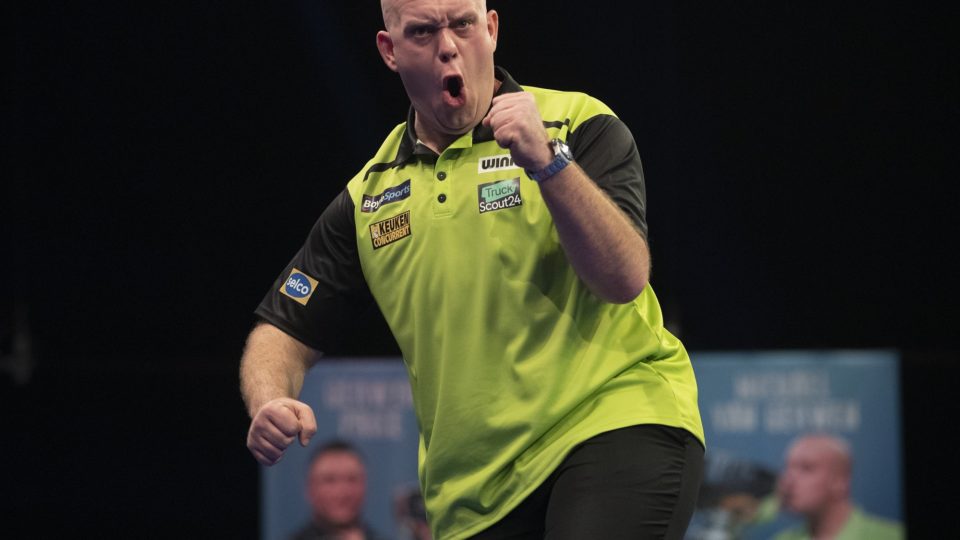 Michael van Gerwen thrashed Gabriel Clemens to book his place in the knockout stages on day two of the BoyleSports Grand Slam of Darts.

The world number one, who beat Adam Hunt 5-0 yesterday, beat the German Giant 5-1 to secure one of the qualifying spots in Group A.

Elsewhere, day two of the Grand Slam of Darts saw:

The Green Machine looked somewhere near his best this evening, in his 5-1 demolition of Clemens.

Van Gerwen started the match with a 15 dart hold, before Clemens missed two to level straight away. This allowed the three time champion of this event to swoop in and hit tops to take a 2-0 lead.

MvG then showed his class, taking out a 86 shot for an 11 darter, before breaking the German’s throw in 17 darts. Despite Clemens getting one of the breaks back, it only delayed the inevitable, as van Gerwen found tops for a 13 dart break to close out a dominant performance, in which he averaged 103.6.

The other game in the group saw Joe Cullen and Adam Hunt play one of the games of the tournament.

Hunt started brilliantly, hitting an 116 shot to hold throw in the opening leg. Three holds of throw followed, before The Hunter missed eight darts to go 3-2 up. The Rockstar punished him, hitting double eight for a 21 dart break of throw.

Cullen then went 4-2 up, before the Hunter responded with a 119 checkout on the bullseye to hold, before hitting a 100 outshot to get the break back and force a last leg decider. There,  Cullen produced a stunning 164 checkout to give him the win in a fantastic game. Both players, along with Clemens can still join MvG in the last 16.

Peter Wright kept his hopes alive of getting out of his group on day two of the Grand Slam of Darts. He came through a tough task 5-3 against Ian White.

Both players broke in the opening two legs, before two holds each saw the match level at 3-3. The World Champion though in the end showed his class, finding a 13 dart hold, and then an 11 dart break, to seal a victory that keeps him in the hunt for a knockout place.

Petersen held throw in the opening leg, before capitalising on a missed darts at tops from the Titan to go 2-0 ahead. Three holds of throw followed, including an 11 dart leg from the Dutchman, but the break in the second leg was enough of a cushion for The African Warrior.

Petersen would hit double 10 for a 17 dart hold, to complete the victory and keep hold of top spot in the group. All four players can still qualify from Group E.

Gerwyn Price fought hard once again on day two of the Grand Slam of Darts. He came through 5-3 against his World Cup team mate Jonny Clayton.

Clayton had the best of the match initially, breaking throw in the first leg before holding in 17 darts to go 2-0 up. However, the two time back to back defending champion is made of stern stuff, fighting back hard with a 121 finish to hold and a 15 dart break to level at 2-2.

Two more breaks followed, before the Ferret missed two darts to break once more and throw for the match. The Iceman remained cool, taking out 60 on double ten, before finding it again in the next leg to battle for a victory.

Elsewhere in Group G, it was much more comfortable for Ryan Joyce against Mikuru Suzuki.

After two holds of throw, Joyce lived up to his nickname Relentless, hitting a lovely 105 checkout with Suzuki on 36. The BDO World Champion then missed a dart at 16s for 2-2, and Joyce punished with a 72 outshot to go 3-1 ahead.

Joyce then reeled off the remaining two legs to take the win, but all is not lost for Suzuki, as she and the other three players can still make the knockouts. If she does not, she will not forget those four missed match darts last night to beat Price.

Michael Smith needs to win one leg on Thursday to qualify for the knockout stages of the Grand Slam. He beat Jose De Sousa comfortably 5-2.

After two holds of throw, Bully Boy produced a stunning 135 checkout on tops to hold and go 2-1. This seemed to hurt De Sousa, who then missed three to level up in the next leg, allowing Smith to break in 14 darts.

The Bully Boy then won the remaining two legs he needed to in 28 darts, to remain top of Group C.

It was a different story in the other game in Group C, where Krzysztof Ratajski fought back to defeat Lisa Ashton 5-4.

At one stage Ratajski was 1/13 on the doubles, as the Lancashire Rose punished him to take a 4-2 lead and move one away from a huge upset. However, Ratajski continued to score well in the final three legs, and then find his range on the outer ring. He won three legs in just 37 darts, taking home a crucial two points. Despite this, Ashton can still qualify for the knockout stages, along with the other three players.

Van den Bergh and Whitlock both through

After hitting the record average yesterday, Van den Bergh again started superbly, finding a 146 outshot for a 12 dart break and holding in 13 darts. The Asp held in the third leg, but then missed three darts to break back and level. The Dream Maker would find double 16 for a 3-1 lead, which seemed to hurt Aspinall. He missed chances to win the next two legs, but ended up just 1/10 on the doubles, as Van den Bergh won them in 31 darts to move into the last 16.

Nathan Aspinall will face off against Ricky Evans tomorrow for the other qualification place in Group H. Evans won 5-3 against Wayne Warren.

The BDO World Champion started well, winning three of the first four legs and punishing Evans’ miss on the doubles. However, when 3-2 ahead, Warren missed double 16 for a 110. Rapid Ricky then capitalised, taking out tops for a 110 himself and levelling the game. An 18 dart hold, followed by a 15 dart break, gave Evans his first ever win at the event.

Simon Whitlock beat Gary Anderson 5-1 to qualify from Group B this afternoon.The Wizard started well, breaking in the opening leg, followed by a 124 to consolidate it.

Anderson would then respond, by taking out a lovely 76 checkout to trail 2-1, but missed tops to hold again and trail 3-2. The Wizard would take advantage, breaking in 21 darts on double 10, followed by a double eight shot to close out the match.

Anderson will take on Ryan Searle, after he defeated Adam Gawlas 5-4 on day two of the Grand Slam of Darts.

Heavy Metal started the better of the two, holding twice and finding a 11 dart break to go 3-0 up. However, the Czech teenager would not lie down, as he reeled off three legs on the spin himself to level the match at 3-3.

Two holds followed, before Gawlas missed a dart at double 16 for his debut win at the event. Searle then held his nerve, hitting double top for a 76 outshot to eliminate the Czech player from the event.

Wade and Chisnall into last 16

James Wade looked impressive once again on day two of the Grand Slam of Darts. He secured his place in the knockout stages with a 5-3 victory over Jermaine Wattimena.

The Machine Gun started brighter, holding and then breaking the Wade throw in 30 darts combined to lead 2-0. However, The Machine recovered from his poor start, reeling off four straight legs in 57 darts to hit the front.

After Wattimena held once more, he missed two darts to send the match to a last leg decider. Wade then held his nerve, hitting tops to book his place in the last 16.

Wattimena will face Damon Heta in a shootout to join Wade, after the Australian defeated Glen Durrant 5-1.

Heta never looked in danger against Durrant, who still looks ill after testing positive for COVID-19 last month. The Heat found victory by hitting double 12 for a 13 dart break, eliminating Duzza from the Grand Slam.

Dave Chisnall is once again into the last 16 of the Grand Slam of Darts, defeating Rob Cross 5-2 in Group D.

It was Voltage who came out of the blocks quickest, holding before hitting a lovely 114 checkout to break and go 2-0 in front. However, Chisnall would recover from the early barrage, winning five legs on the spin as Cross could not find doubles at crucial moments. Chizzy ended the match by hitting tops for a 14 dart break, winning a spot in the knockouts.

Luke Humphries will take on Cross tomorrow for the other qualification spot in Group D, beating Justin Pipe 5-4.

Humphries broke in the opening leg, before eventually going 3-1 up. However, five missed darts in the sixth leg saw Pipe claw the break back. Two holds saw the game go the distance, where The Force missed bull for a 118 outshot to win the contest. Humphries lived up to his Cool Hand nickname, pinging double top to take victory, ending Pipe’s Grand Slam hopes in the process.