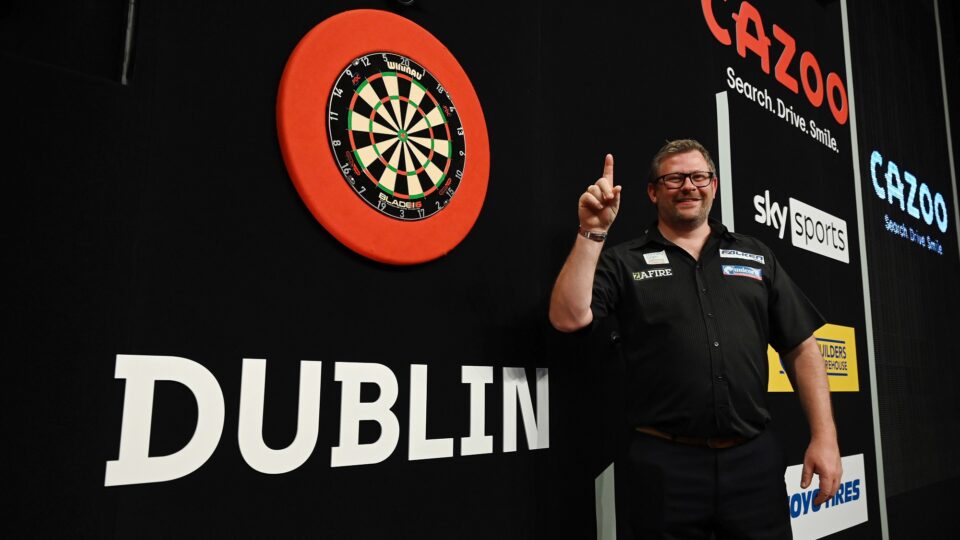 Record-breaking James Wade threw some of his finest darts of his career to win the Cazoo Premier League in Dublin on Thursday.

The left-hander dominated at the 3Arena, winning his second league night game of the season in spectacular fashion in front of 8,000 supporters in Dublin.

The world number five upset Michael van Gerwen in a tense first quarter-final, then beat Gerwyn Price with a personal best average of 114.73, before completing a fantastic night by defeating Jonny Clayton in the final.

Wade got off to a strong start in a high-quality final, taking an early two-leg lead.

Clayton, the league leader, swiftly took control of the game by stringing together a run of four consecutive legs to take a 4-2 lead.

Clayton struck an 11-darter to pull 5-3 lead in the race, but the 39-year-old had other ideas.

Wade levelled the match at 5-5 after surviving Clayton’s missing match dart at the bull. The Machine reduced the gap to one leg and then broke throw with a spectacular 118 checkout to break throw – with his opponent waiting on 16.

Wade wasted the first opportunity for the match in a gritty deciding leg by going inside on the inside on double 15.

Clayton then missed inside on tops with his final dart to lose out on 76, allowing Wade to return to the oche and pin double four for maximum points in Dublin.

Wade’s victory is his second of the 2022 Premier League season, and it pulls him within four points of Clayton at the top of the standings – and even with Van Gerwen in second.

“I am just so happy,” Wade proclaimed after victory. “All three matches had some magical moments, but it’s nice to win the last one.

“I’ve been here for 20 years and I am so happy with that. It is up there with [my best] performances and I am so lucky to be involved in the Premier League.

“I’m not here to make the numbers up. I’m fighting amongst great dart players and legends in the game, but I believe I can still finish top.

Wade’s semi-final victory over Price will be remembered for a long time, as he set a new personal best by averaging 114.73, hitting six doubles on seven attempts, and landing a ten-darter.

However, Wade added: “It’s a great game to be involved in, but it’s just nice to mix it with the best darts players in the world.

“I’ve been involved in other games and situations where I’ve been right up against it. When I come off afterwards I thought I had got a bit lucky, but then when people relayed the statistics to me, I just thought ‘wow’.”