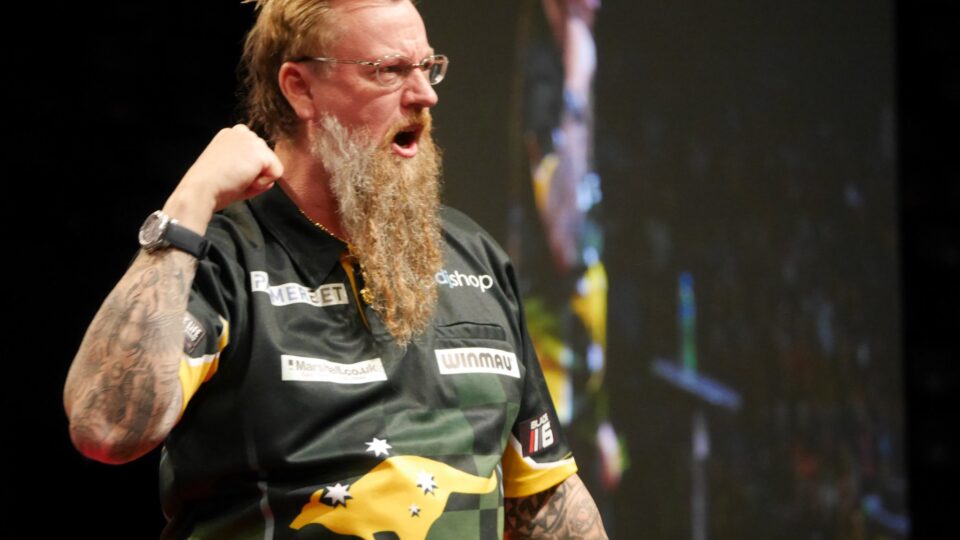 On Friday’s opening night of the PalmerBet New South Wales Darts Masters, Simon Whitlock put on yet another spectacular performance Down Under to defeat Michael van Gerwen

The home favourite Whitlock stole the show on the first night of the £60,000 competition, defeating Van Gerwen to become the lone Oceanic winner in Wollongong.

In a stunning stretch of play, the two players exchanged six straight throw breaks. Whitlock eventually levelled the match at five apiece by converting a two-dart 88 finish after surviving a match dart in the penultimate leg.

A packed house at the WIN Entertainment Centre cheered on the 53-year-old as he produced a 74 finish on double eight to overcome the Queensland Darts Masters champion from the previous week.

“That was super good. To beat Michael five times in a row is sensational,” said Whitlock, who defied a 101 average from the Dutchman to book a meeting with Joe Cullen in the last eight.

“I was saying to myself: ‘You’re playing the best again now, so you have got to perform.’

“I had a little bit of luck, but I will take it. That was a hard-earned win, and it was all about belief.”

However, in a thrilling last-leg shootout, it was Michael Smith who delivered the performance of the opening night to defeat Australian number one Damon Heta.

Inflicting a second straight 6-5 loss on Whitlock’s World Cup partner Heta, who earlier lost to Gerwyn Price in a decisive-leg match in Townsville, Smith blasted in six 180s and averaged 106.33.

The first ten legs went with throw despite Smith consistently outscoring Heta, but the pressure eventually paid off as Smith smashed in a 12-darter in the decider to secure his place in the quarterfinals.

Price, the Queensland runner-up, defeated Koha Kokiri by a landslide and advanced to Saturday’s finals with three 180s and two legs of 11 darts with a 104.86 average.

The Women’s World Matchplay champion Fallon Sherrock, 27, who won her maiden World Series match in Australia by edging off Mal Cuming, will oppose the Welshman in the round of eight.

Sherrock had trouble in the first rounds, but a superb 12-darter in leg five ignited a run of three consecutive legs, and she maintained her composure in the decider to win with a 16-dart hold.

James Wade also achieved success in this year’s tour Down Under by defeating Gordon Mathers, a semifinalist in Queensland the previous weekend, in a thrilling comeback.

After a shaky start, the ten-time TV title winner trailed 3-2 before reeling off four straight legs in 15, 15, 12 and 15 darts and securing his advancement with a clinical 116.

In other matches, Cullen overcame Dave Marland for the second week in a row to secure his spot in Wollongong’s latter rounds on Saturday.

Cullen, who averaged 108.65 to defeat Marland seven days prior, held off the veteran Australian’s valiant comeback to seal a 6-3 victory.