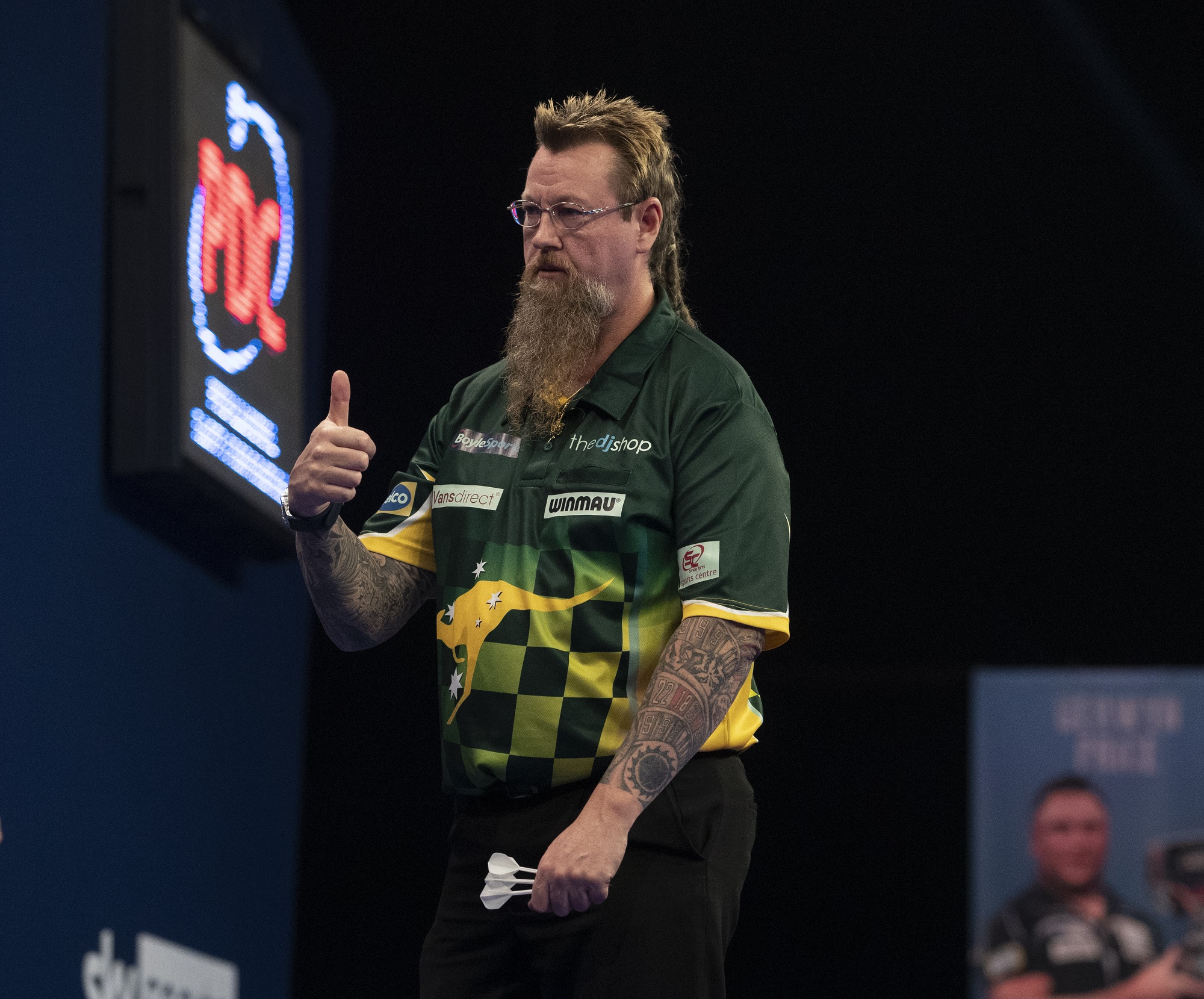 Simon Whitlock defeated Michael van Gerwen to round off an amazing quarter final day at the BoyleSports Grand Slam of Darts.

The Wizard, who defeated MvG at the World Matchplay and the World Grand Prix, survived eight match darts to come through 16-15 in a gripping last leg decider.

Whitlock battles past MvG in classic

Van Gerwen started the better, capitalising on missed doubles in the first two legs by The Wizard to take a 2-0 lead. However, stunning 124 and 122 checkouts on the bull would see Whitlock level, before a comfortable hold from MvG made it 3-2 at the first intermission.

A 14 and 16 darter saw the Green Machine take a 5-2 lead straight after the interval, despite Whitlock missing two darts to get the game back on throw. Three further holds saw the game reach 6-4 after 10 legs.

Whitlock found 25 to get the game back on throw, before the world number one reeled off three legs in 41 darts to take a 9-5 double break lead. However, The Wizard would not go down with a fight, as he found an 11 dart leg to get one of the breaks back and make it 9-6 after three sessions.

MvG started the fourth session well, taking the first two of the first three legs to move 11-7 ahead. However, he missed bull for a 123, and then a darts at tops in the next leg, allowing The Wizard to stay in the contest, taking the session 3-2 to trail 11-9 at the final interval.

Whitlock reeled off three of the first four legs in the final session, taking 40 darts to level at 13-13. MvG then held, before producing a remarkable 146 to break the Wizard’s throw once again, seemingly giving him victory.

However, Whitlock survived four match darts in the next leg, eventually finding double 13 to get the break back. After holding on double 10, the match would fittingly conclude with a last leg decider. Van Gerwen once again missed four darts to close it out, as Whitlock, who hit a Grand Slam record 20 maximums in the contest, found double eight to get over the line in one of the best games the tournament has ever seen. It was the only time that the Australian was ahead in the entire match.

It was an excellent start for The Special One, who won the opening three legs in just 43 darts. Bully Boy found one leg, before squandering five darts to get the game back on throw. De Sousa then found tops to go 4-1 ahead at the first interval.

Smith then missed darts to win the next two legs, as two 15 darters saw De Sousa go 6-1 ahead. The Portuguese number one then squandered four darts himself in the eighth leg, as Smith found double 10 to win his second. However, a 12 and 13 darter saw De Sousa continue to take control, leading 8-2 at the second interval.

The Bully Boy would not go down without a fight though. Out of the second interval, he produced a whitewash session to get the game back on throw, before finding double eight to level the game at 8-8. After two holds of throw, Smith would go ahead for the first time in the match, producing a 12 dart break to go 10-9 ahead. However, The Special One would break back immediately, producing an 11 darter to level at 10-10.

After two holds, Bully Boy found double five to break and go ahead 12-11, but De Sousa hit double 12 to level immediately again. Five holds of throw saw the Portuguese man lead 15-14, when Smith missed three darts to send the match to the final leg. De Sousa then hit double 16 to close out a tight and gripping contest, making his first ever PDC TV semi final in the process.

It was Aspinall who started the better of the two, holding twice before breaking on a 76 shot to lead 3-1. Eight straight breaks of throw then followed, as both players missed chances to hold. With the score at 6-5, Van den Bergh found a double 16 to get the first hold in nine legs, levelling the contest for the first time.

Aspinall though looked to have taken control once again. After holding for the first time in five attempts, he took advantage of three missed darts from the Dream Maker to level, hitting a 74 outshot to go ahead 8-6. Six straight holds of throw, including a 110 finish from Van den Bergh, saw the match go to 11-9 at the final intermission.

The Belgian came out fighting afterwards, hitting a lovely 130 finish on the bull to get the game back on throw, before levelling with the next. Two more holds followed, before The Dream Maker looked to have got the crucial break. After Aspinall missed bull for a 161, Van den Bergh, who’d missed double eight for a 127, pinged it for a 13 dart break to go ahead for the first time. An 11 dart hold then saw him go 14-12 in front.

The former UK Open champion would not go down with a fight. After holding, he punished four missed darts from Van den Bergh for the leg, hitting a 72 outshot to level at 14-14. After two further holds, it all came down to one leg of darts, and Van den Bergh produced a stunning leg to leave 36 after 12. Despite a 180 from Aspinall to leave 36, the Belgian stayed cool, hitting double 18 to come through an absolute battle against a heartbroken Aspinall in the final leg.

James Wade made his third ever Grand Slam of Darts semi final, defeating debutant Damon Heta 16-13 in a match that featured 52 140s.

The Machine produced a stunning start, averaging 104 to win the first four legs in 54 darts. He missed three darts to complete the whitewash session, allowing Heta to hit double eight to trail 4-1 at the first interval. That seemed to settle the Heat, as he reeled off two straight legs to get the game back on throw, before Wade produced a 14 darter to remain two clear. Two holds of throw saw The Machine lead 6-4 at the second interval.

Five further holds, including a stunning 152 from Wade, saw him keep a 9-6 lead at the third interval. However, Heta would not go lightly. After being broken in the first leg after the restart, back to back ton plus checkouts of 108 and 142 helped him to win the session 3-2, trailing 11-9 after 20 legs.

After five straight breaks of throw, The Heat then found the first hold in the fifth session, hitting a lovely 101 outshot to level up the contest at 13-13. Wade though would not be denied, as he found a 14 and 15 darter to go within one of the match, before finding double eight to complete the victory and move into the last four.