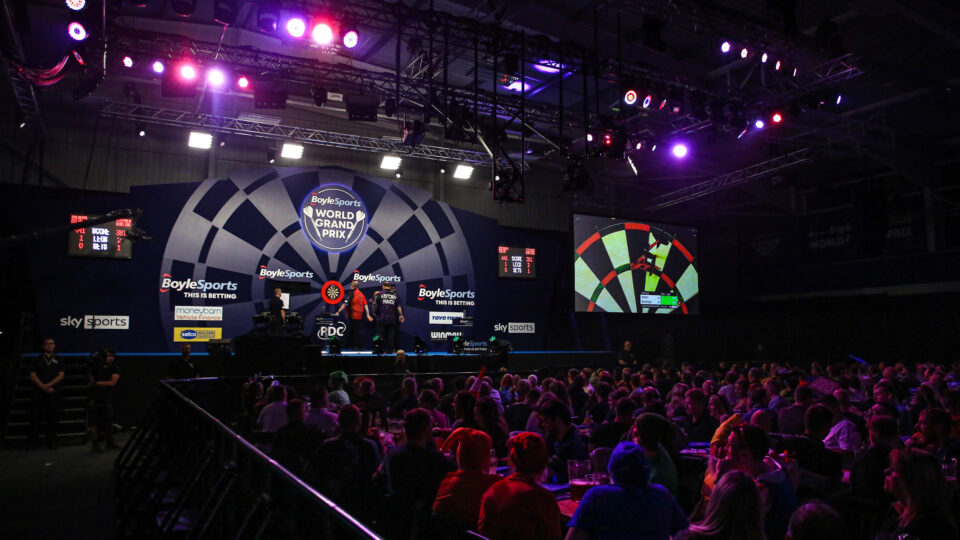 The opening round of the BoyleSports World Grand Prix concludes tonight.

Tonight will see 8 more best of three set matches played, meaning we have plenty to consider. Jose De Sousa was the only seeded player to exit on night one. Rob Cross, James Wade, Gerwyn Price and Michael Smith will all look to avoid the same fate.

The Morningside Arena in Leicester has almost been as beneficiary to Price as the Civic in Wolverhampton. The Welshman has been to back to back World Grand Prix finals in the last two years.
Last years defeat by fellow countryman Jonny Clayton was a tough one for the Iceman to take. As will have been his demotion to World Number two this week. That is unless he wins the title, defends his winners cheque from two years ago, and Peter Wright falls before the final.

Price will once again do battle with Martin Schindler this evening. The pair seem to have faced off in every event possible this year. All three of their previous meetings this year have been won by Price, but he will be well aware of the threat Schindler poses over the short distance.

Is it Smith’s time?

A question that continues to be asked ahead of every PDC Major. Many will have fancied the BullyBoy for the World Matchplay this year, only for the Englishman to suffer defeat in round two by Dirk van Duijvenbode.
Smith’s immediate recent form has not been as sharp as the build up to the Matchplay, and much of the attention ahead of this event has been shined on the Big 3 (Wright, Price and Van Gerwen). Perhaps an absence of attention is what Smith needs in the early rounds to mount a charge for his first PDC ranked TV title.

A rejuvenated Nathan Aspinall is the man standing in the way in round one. The Asp has recovered from a wrist injury that plagued the start of this year. His return to fitness means he is now a credible threat to the field, starting with Smith.

Of the 32 man field their are three debutants present this year. Madars Razma gets the opportunity to open the show. The Latvian has been on a constant ascension throughout 2022 and his versatility around the board should stand him in good stead in this event. Standing in his was is Ryan Searle. After an exceptional 2021 campaign Heavy Metal will be hoping to kickstart his season ahead of the busy period.

Martin Schindler has the opportunity to cause the biggest upset. As already mentioned he takes on Gerwyn Price, and will use the experience and memories of the 2021 Grand Slam to assist his quest for a third televised win over Price.

Smash, Martin Lukeman will fancy his chances of reaching round two on debut. James Wade is his opponent. The Machine has lacked form since a stay in hospital whilst in Germany earlier this year. Recent performances and perhaps more importantly results have symbolled an upturn in fortunes for Wade, but the two time former winner of this event has only won two matches in the World Grand Prix in his last 7 attempts.

Before I dive in to this one, notable shouts to Cullen vs Heta and Ross Smith vs Andrew Gidling. Both matches have the potential of being absolute crackers.

But the understory to Cross vs Gurney is too intriguing to not discuss it. A couple of years ago, after Rob Cross’s meteoric rise and Gurney’s victory in two major’s many floated the idea this was the new rivalry. One that would sit at the top of the game for the foreseeable future.

Since then, both players have had their struggles. Cross has lifted more silverware, often with his ‘B’ game but has not sustained a presence at the top end of the world rankings. In truth, Gurney hasn’t even threatened a Major title in 3 years, but signs have been good for fans of SuperChin.

Much like Gary Anderson vs Michael van Gerwen meeting in round one last night, this being an encounter here on night two represents the fall Gurney in particular has suffered in recent years. But a win for either player could set them on the path to a much steeper rate of redemption that so many are currently searching for.

Check out our recommended bets with the title sponsors BoyleSports here.