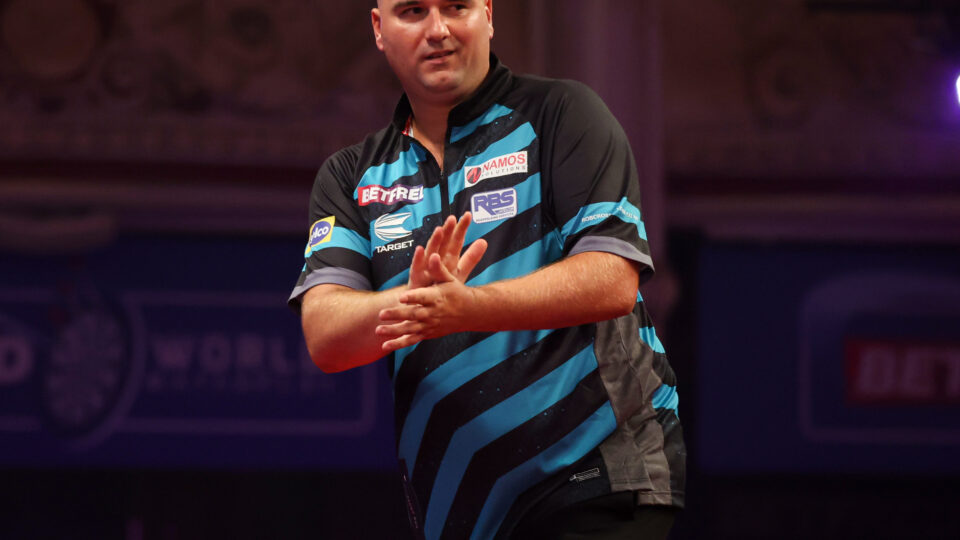 Round one of the Betfred World Matchplay was completed on Monday evening, with all four seeds progressing into the last sixteen.

Rob Cross fights back from 8-2 to defeat Chris Dobey 11-9. The two players met in the 2019 World Matchplay first round with Cross winning not just the game but the whole tournament.

Hollywood scoring power was too much for Cross in the early stages, with Dobey firing in four 180s in four legs and raced it to a 4-1 lead.

Rob Cross won legs eleven and twelve, before the turning point, came in leg 13 with both players missing an handful of doubles before Cross got the crucial break. Dobey then missed darts at 8-6 to move one away, this time Cross punished the first time.

Dobey won his first leg in seven, with an 11 dart leg to lead 9-8. Rob Cross held to make it 9-9, before taking out 70 punishing a missed dart by Dobey. The comeback was complete by Cross and he set up a clash with The Special One.

Gerwyn Price had to find his ‘A’ game to get the better of Martin Schindler, defeating the young German 10-8.

Gerwyn Price won the first and last legs of the session but three on the spin for The Wall. Three holds of throw followed with Martin Schindler missing double 15 for a 150 checkout in third of those legs. Schindler missed again in leg ten, and Price was punished once more with a 68 checkout.

Four holds of throw followed the second interval, before Gerwyn Price found another gear with back-to-back 11 darters, in leg 16 Schindler hit two 180’s in the leg but didn’t get a dart a double due to the sensational arrows from the Welshman.

Martin Schindler did get a hold to close the gap to one, but The Iceman sealed the win with a 14 dart leg.

Jose de Sousa continued his dominance over Gabriel Clemens with a 10-6 victory.

Both players found the treble 20 bed with ease in the early stages with three 180s being hit in leg one. Clemens struggled to stay with Jose early on and The Special One raced into a 4-1.

Clemens held then found a break but wasn’t able to level up the scores with Jose breaking straight back which started the run of three straight legs to lead 7-3 when the players left the stage.

Jose de Sousa won the next two before we saw a fightback from The German Giant stopped in the sixteenth leg, after missing seven leg darts, Jose delivered a special 136 finish to seal the win.

Dave Chisnall was the final name in the second round after defeating Kim Huybrechts 10-7.

Kim started the stronger but was unable to show this on the scoring with only a one leg lead in the break. This gave Chisnall confidence and won the second session with the same scoreline.

The next four legs went with throw, until Chisnall found an extra gear which was too much for Kim Huybrechts and won the next three legs to be the last name in the second round.

For all interviews from World Matchplay Day Three head over to Online Darts YouTube channel.