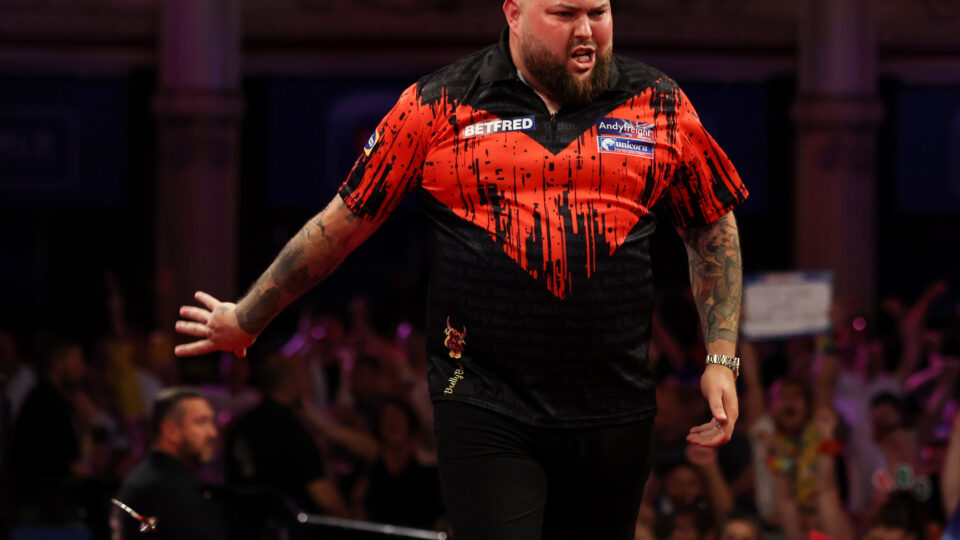 The second day of action at the 2022 Betfred World Matchplay saw all three Dutch players come from behind to progress to round two.

We also had a comeback win for Michael Smith who defeated Andrew Gilding.

Both players struggled with consistency with their scoring and it was Jackpot who took an early 3-1 lead.

Both players continued to struggle however, Michael found a little bit of form to win four of the next six legs to make sure scores were all level going into the last interval.

With both players holding throw, it was leg 14 when Michael found the right darts at the right time, firing in a 14 dart leg to lead by two for the first time in the game.

Adrian struggled to recover from that and Michael secured the victory with a 76 checkout.

The game started with three breaks of throw with the highlight being a 143 checkout from Nathan Aspinall. The Asp reeled off the next four legs to lead 7-1.

Luke Humphries started the fight back with his first hold of throw at his fifth attempt and followed that up with a 15-dart break.

This followed four holds of throw in the game before Aspinall sealed the win with a 16 dart break of throw.

Cullen Too Hot For Heta

Damon Heta started with a 110 checkout but it was Joe Cullen who delighted his fans in Blackpool winning the next four legs.

Joe Cullen got even better after breaking, hitting a fabulous 160 checkout in leg six before a Shanghai the following leg to move closer to the finish line.

It was starting to look like Joe could reel off ten legs on the spin, but Heta stopped the run at nine with an 18 dart leg. All that leg done was to delay the inevitable as Rockstar took out double 10 to wrap up the victory.

James Wade won the first three legs of the game, with both players averaging in the ’80s throughout the game, before Lukeman hits double five, that before breaking to make it 3-2.

Martin Lukeman seemed to struggle with the heat on stage, and James Wade punished, finding a 120 checkout and winning three of the next four legs to secure the victory.

Early exchanges favoured Goldfinger who lead 5-2 early on which included a 104 checkout. It could have been even better for Gilding who missed a dart to extend the lead. Bully Boy won the eighth leg and then produced a bit of magic in the next leg with a 161 checkout.

Gilding didn’t let the big checkout affect him and he went on to win the next three, taking an 8-4 lead with a 130 checkout.

Bully Boy’s average was creeping up after the second session and after Gilding missed a double to lead 9-5, Smith reeled off four legs to lead 9-8. Michael Smith then had three match darts to win 10-8, before Gilding found double five, with the last dart in hand to take us to extra legs.

Smith then bullied past Gilding in the last two legs, first holding on double two, before wrapping up the victory on his favourite double 10.

Aubiergenius started the game with a 130 checkout, and was close to making it back-to-back 130 outs but hit 25, and Searle was punished to break straight back. With the next three legs going with throw, Searle got the next break with a 104 checkout.

The breaks continued until Searle held throw in leg nine with an 88 checkout to take a 6-3 lead. Dirk got a crucial hold before the break, which included his first 180 in the game, and followed up it with another two legs to level the game up at 6-6.

The next four legs went with throw, and then the Aubiergenius found another gear with an 11 dart break for the lead for the first time since leg one.

A 180 to start leg 18 for Dirk helped up secure a 12 dart hold of throw and wrap up a difficult win.

The opening session saw five holds of throw with the highlight being a 72 checkout from Brendan Dolan in the fifth leg.

The finishing got even better in leg six with a 135 special from Brendan Dolan for the first break of throw and a 4-2 lead. Both players then held throw before, two breaks seeing Dolan lead 6-4 at the second break.

A key moment in the game came in leg 11 with Dolan missing a dart at tops for a three-leg lead and Noppert punished, before hitting seven perfect darts in leg twelve before winning in 11 darts.

Dolan then made a mess to lead 7-6, not leaving a finish after 74 before missing three at 32. and the 2022 UK Open champion takes the lead for the first time in the game.

A Shanghai finish to extend the lead which deflated Dolan, before Noppert won the next two legs, making it six on the spin and a 10-6 victory.

Daryl Gurney defeated Gary Anderson 10-7 in round one.

Both players started slowly and we saw six breaks of throw in the first two sessions and scores were all level at the second break. Daryl Gurney did find seven perfect darts in the seventh leg but lost it with Gary Anderson firing a 130 checkout.

Daryl Gurney then took the game by the scruff of the neck winning three straight legs to edge closer to victory. He could have made it four but missed tops for a 118 checkout before, Anderson cleaned up the leg.

In the final leg in the game, Daryl Gurney opened up with a blind 180 before winning the leg on double eight and getting through to the second round.

For all interviews from World Matchplay Day Two head over to Online Darts YouTube channel.