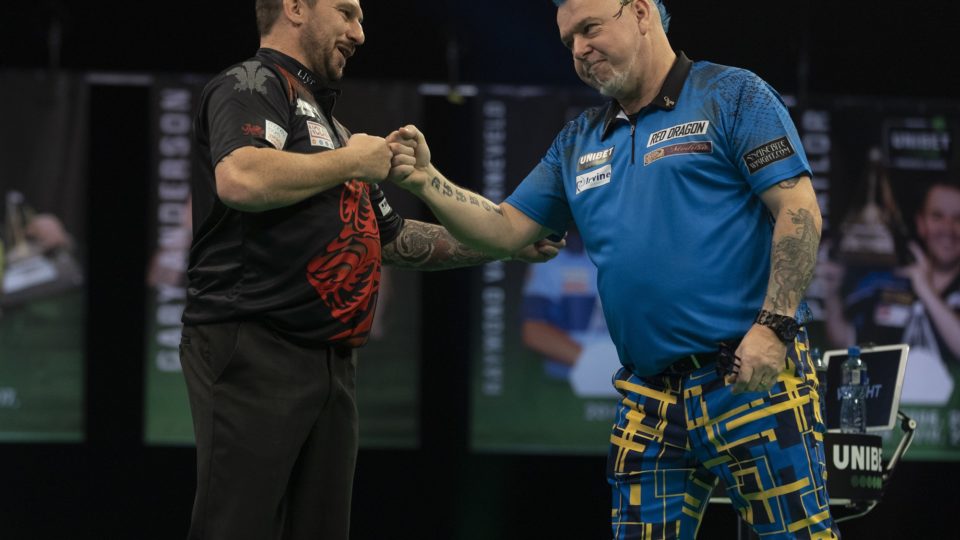 Peter Wright and Jonny Clayton played out a fantastic 6-6 draw on night one of the 2021 Premier League Darts.

In one of three draws on the opening evening, Snakebite had to be perfect on his doubles to get a point against full time debutant The Ferret. Wright averaged 101.20, while Clayton averaged 105.56.

Elsewhere on night one of the 2021 Premier League Darts:

The 6-6 draw between Wright and Clayton was easily the game of night one. All but one leg was won in 15 darts or less, as Snakebite had to be 6/6 on his doubles to ensure he got a point against The Ferret.

Clayton started the better of the two, hitting tops to break throw in the first leg. Wright responded excellently, hitting double 19 for an 11 darter to level up straight away. Two more breaks followed, before both held throw on double 12 to make it 3-3.

The Ferret then missed bull for his third break of throw, and Snakebite punished, hitting an excellent 106 checkout to hold. The former World Champion then followed up with a magnificent 138 outshot to go 5-3 in front.

Clayton, making his full Premier League debut, did not relent though. A 129 finish on the bull saw him break straight back, followed by an 18 darter hold saw him level the contest back up at 5-5.

The Welshman then missed bull for a 161 to break once more, and Wright took advantage, hitting double 18 to hold and secure a point. The Masters quickly shook off the disappointment, hitting double 12 for a 14 darter in the next leg to ensure the spoils were shared.

A stunning 156 checkout saw Gary Anderson take a point from his opening game against James Wade. The Flying Scotsman produced the remarkable outshot with Wade, who replaced Gerwyn Price due to the Welshman having a positive COVID-19 test, sitting on 80 to win the match.

Both players held throw in the opening two legs, before Anderson missed three darts to take a 2-1 lead. Wade then found double top to hold once more, before the Scotsman hit tops to level the contest at 2-2.

Wade found a 96 finish on double 19 to go in front again, before a 12 darter saw him take a 4-2 lead. The two time World Champion broke back immediately though, hitting tops once again to cut the gap to 4-3. However, more missed doubles cost Anderson, as he squandered two at double 16 to bring the contest all square again. The Machine then found tops for a 44 checkout to go 5-3 in front.

Anderson though responded brilliantly. A 13 darter saw him break once again, before finding double six to level up the match after both players missed darts to win the 10th leg.

Another dart at tops was missed by the two time former champion, before the 2009 champion Wade pinged in a 96 outshot to go 6-5 up and guarantee a point. Sitting on 80 after 12, The Machine looked to have secured the victory, but Anderson, who had been 5/19 on the checkouts prior, thought differently. He produced the fantastic 156 outshot on double 18 to make sure he left the opening night’s action with a point.

A 101 checkout from Michael van Gerwen saw him take a point against another full time debutant Dimitri van den Bergh.

Both players held throw in the opening two legs, before an incredible 164 from The Dream Maker saw him break throw and go 2-1 ahead. MvG responded though, hitting double 13 for an 81 checkout to level at 2-2.

Van den Bergh broke once again, finding double four for a 15 darter to go 3-2 in front. He then missed double 16 for a 4-2 lead, and The Green Machine found double four himself to square the match once more.

Two further holds from each saw the game move to 5-5, before both missed darts at double for the 11th leg. In the end, the Belgian hit double four to once again go in front, securing a point in the process. Van den Bergh left himself on 64 for the match, before MvG hit the 101 on double 18 to make sure of the draw.

Duzza averaged just 68.3 in the opening two legs, as Aspinall found a 124 checkout to take a 2-0 lead. Durrant eventually got on the board with a 17 dart break, but tops to level the contest at 2-2. The Asp seized the opportunity, finding double 15 to go 3-1 in front and get the break once again.

Aspinall held, before leaving 41 after nine darts in leg six. However, he did not get a chance to take a 5-1 lead, as Durrant hit an 86 checkout for a 12 dart hold to trail 4-2. Once again though, crucial shots cost him, this time a bullseye for what would have been 4-3. The Asp once again punished, hitting double 10 to go three clear, before finding a double double finish on 18’s for a double break and to go within one of the match.

Durrant kept himself alive with a 15 dart break, but it only delayed the inevitable. Aspinall hit his sixth 180 of the contest to leave 42 after 12 darts, and found double 16 for a 14 darter to complete a routine win.

The Asp goes top of the pile after night one, being the only player to get a victory.

Rob Cross and Jose De Sousa played out a tight and tense 6-6 draw on night one of the 2021 Premier League Darts.

It was former finalist Voltage who started brightest, hitting an 82 finish on bull to take the opening leg. De Sousa though would respond brilliantly, hitting a double double finish on 18’s to get his first leg on the board.

After both held throw once more, it would be The Special One to get the first break, finding double five after both missed darts to win it. Cross though responded instantly, finding double 18 for a 14 darter to level up at 3-3.

Two more holds followed, before the Grand Slam champion found another break, hitting double 11 to go 5-4 ahead. After hitting double two to guarantee himself a point on debut, one leg separated him from victory. However, Voltage fought hard hitting a 16 darter, followed by an 88 finish on the bull for a 12 dart break to make sure the points were shared. In a match where 10 180s were thrown, a draw seemed the fairest result.