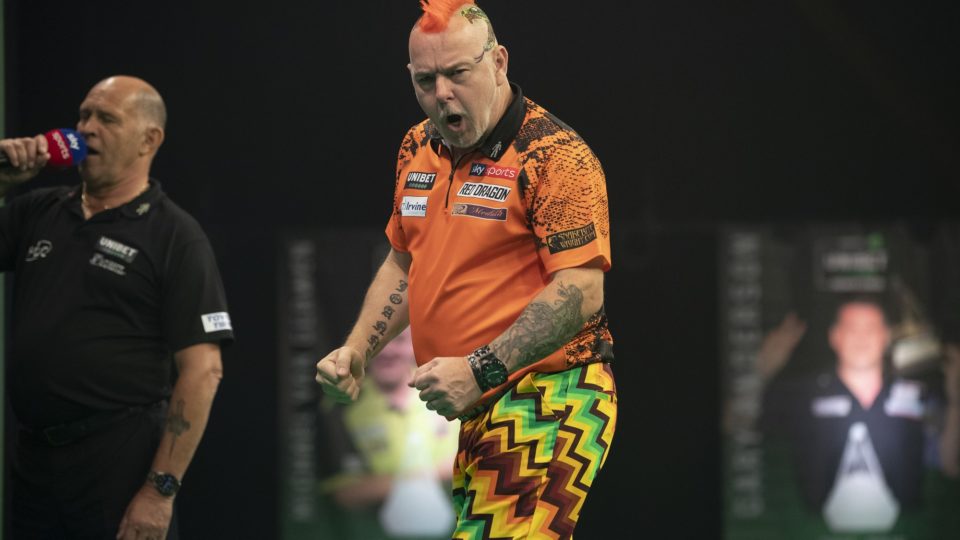 Peter Wright moved into the Play-Off places on night 13 of the Unibet Premier League with an astonishing 8-1 victory over Michael van Gerwen.

The world champion outclassed the world number one to knock MvG out of the top four, as the race to qualify for The O2 continues to heat up.

Elsewhere on night 13 of the Premier League:

A 13 dart hold of throw saw Wright take the lead, before the world champion hit double 16 for a 2-0 lead, punishing two darts missed for the leg by van Gerwen.

This seemed to inspire Wright, as he continued to score brilliantly, carving out opportunities to take the next three legs. He took them to open up a 5-0 lead on van Gerwen.

The Green Machine got his first leg of the match in the sixth leg, but that would be the only leg he’d win. Missing 126 for the sixth leg did not deter Wright, as he cleaned up the next three legs, winning the match with a fantastic 100 outshot to move third in the table and knock van Gerwen out of the Play-Offs with three nights to go.

Michael Smith blew a 7-2 lead and had to settle for a draw against Glen Durrant on night 13 in the Premier League.

In a match Smith had to win to keep pace with the top four, he struck the first blow. After sharing the first two legs, he hit back to back 180s in the third leg to leave 41, finding a double 10 to take the lead 2-1.

After splitting the next two legs, Smith then struck what looked the crucial blow. He won four straight legs, punishing plenty of missed darts at double from Durrant, to go 7-2 up and guarantee a point.

However, just like in the game v Gary Anderson on Saturday night, Durrant showed why he is top of the table in 2020. In the 10th leg, Smith missed double five for the match, which allowed Duzza to take out a brilliant 131 to save the game and trail 7-3.

That seemed to give Durrant the confidence on the outer ring, being 2/11 on the doubles before the 131. He then reeled off four more legs, punishing more missed darts for the match from Smith in the 12th leg, to secure an unlikely draw and move onto 20 points in the 2020 Premier League, guaranteeing him a place in the Premier League top four.

Nathan Aspinall moved third in the table on night 13 in the Premier League, as he defeated Gerwyn Price 8-6.

The two were level on points coming into this game, and a win for either of them would have put them into the top four. After sharing the first two legs, it was Aspinall who would strike the first significant blow. He won three straight legs, finishing off the run with a brilliant 125 finish to go 4-1 ahead and get a double break of throw.

Price then came back, hitting a 121 checkout on the bullseye to trail 4-2, before The Asp found a double top finish to go 5-2 ahead in the next leg. Price would not lie down though, and punished multiple missed darts at a double from Aspinall in the next three legs to win them all and get the game back level at 5-5.

Aspinall would find his range on the outer ring in the next leg though, breaking once again with a 56 outshot to go 6-5 ahead. With both players holding their throw once more, Aspinall had a 7-6 lead going into the final leg. In that final leg, he found double top for a 13 dart hold to take a crucial two points and maintain his push for a Play-Off spot in his debut year.

Anderson stumbles over the line against Gurney

Gary Anderson needed 11 match darts to eventually get an 8-6 win against Daryl Gurney.

Gurney came out the stronger of the two players, hitting a 150 and then a 116 checkout to take a 2-0 lead. Anderson would get on the board in the next leg though, finding a double 3 to get the break straight back and trail 2-1.

This seemed to fire up The Flying Scotsman. He went on a charge, winning five straight legs and averaging 105, as he took a 6-2 lead. After Gurney hit a 76 to stop the rot in the ninth leg, Anderson took out 83 on the bullseye to lead 7-3 and guarantee a point.

Anderson however struggled to get the job done. He missed eight match darts, including six in the 12th leg, which allowed Gurney to win three straights legs and trail 7-6 heading into the final leg. After two more missed darts at double 14, Anderson finally found it to crawl over the finish line to all but end Gurney’s faint Play-Off hopes. He’s now onto 17 points, three behind Glen Durrant at the top of the table.