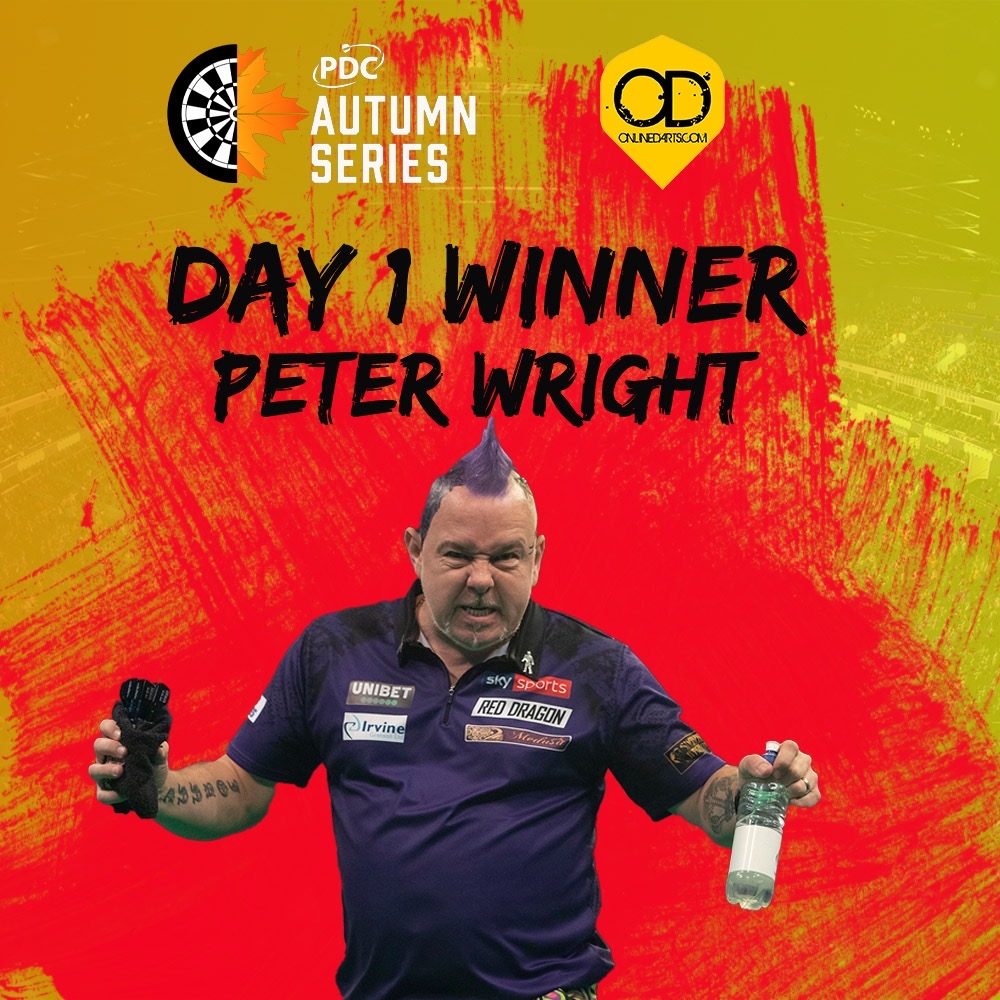 It was Snakebite’s second successive Pro Tour title, after claiming victory on the final day of the Summer Series in July.

However, despite losing in the final, it was an excellent day for Razma. After being one game away from a World Series of Darts Finals place on Friday, he backed it up today with a run to his second PDC ranking final. It also saw him go into the World Grand Prix qualification places, replacing Steve Beaton.

Elsewhere on day one of the PDC Autumn Series:

It was a largely scare free day for Snakebite, who was looking to follow up his second place finsih in the league phase of the Premier League by winning the first title on offer in Niederhausen, Germany.

Wright averaged 99 for two of those games, and averaged 99 in his next two games. He won 6-1 against Boris Krcmar, before whitewashing Premier League league phase champion Glen Durrant 6-0.

That set up a mouth watering semi final against Michael van Gerwen, who had changed back to his old darts and was looking imperious throughout the day. In a high quality affair, Wright was 5-2 down, despite averaging 115 at one stage. However, he fought back hard, eventually coming through 7-6 in a last leg decider with a 109 average.

That set him up perfectly against a surprise finalist in Razma, and he hardly broke sweat. He won four legs on the spin to start with, and despite the Latvian getting one leg on the board, Snakebite powered on to claim another four legs on the spin for an 8-1 victory. It’s the first time he’s won two straight Pro Tours in nearly two years.

Madars Razma was quoted at 400/1 to win the title today by some bookmakers to win Players Championship 14, but surprised everyone with a fantastic run to the final.

After making the final round of the World Series qualifier yesterday, the Latvian continued his good form with a 6-3 victory over Steve Lennon in round one. He then beat Dirk van Duijvenbode 6-2 in the second round, before winning his board with a 6-4 victory against Ian White.

Razma then continued on a fairytale run, beating Karel Sedlacek in the top 16, and demolishing Jelle Klaasen 6-1 in the quarter finals. This meant he’d face Devon Petersen in the semi final, who was desperate to make his first ever PDC ranking final. In what was a topsy turvy game, Razma missed two darts for the match in the 12th leg, leaving Petersen to level up at 6-6. Petersen then missed a bull for the match in the 13th leg, allowing Razma to find a 78 outshot to win an absolute scrap of a semi final, and reach the World Grand Prix qualification places in the process.

The semi final win seemed to take a lot out of Razma. He could not get going in the final against the World Champion, but has put himself in a great position to reach the Grand Prix for the first time in his career.

Both Devon Petersen and Michael van Gerwen made important semi finals for different reasons. For Petersen, that takes him onto £17,000, £3,000 away from £20,000 on the Order of Merit and potentially securing his World Grand Prix place. For MvG, it was the first time he’d thrown with his old darts, and looked unplayable at times throughout the day. He took out big finishes, and the darts seemed to group better for him, which could give him confidence for the rest of the week.

Elsewhere, Jesus Noguera produced a quarter final run, following up a good run at the World Series qualifier yesterday. Simon Whitlock and Mervyn King made the top 16, while Martijn Kleermaker made the last 32, putting themselves right back in the qualification race for the Grand Prix. It was a good day for the three as:

All lost in the first round. It means that Beaton drops out of the qualification places on countback, with Dobey on the same prize money of £14,000. It tightens up the race, and players know that they will need one good day at least this week to get themselves to the Grand Prix.

Finally, Carl Wilkinson hit a perfect leg. He hit the nine darter in his first round match against Joe Cullen, but he lost 6-5.

How can I follow day two of the Autumn Series?

We’ll have day two, and the rest of the Autumn Series, covered at Online Darts.