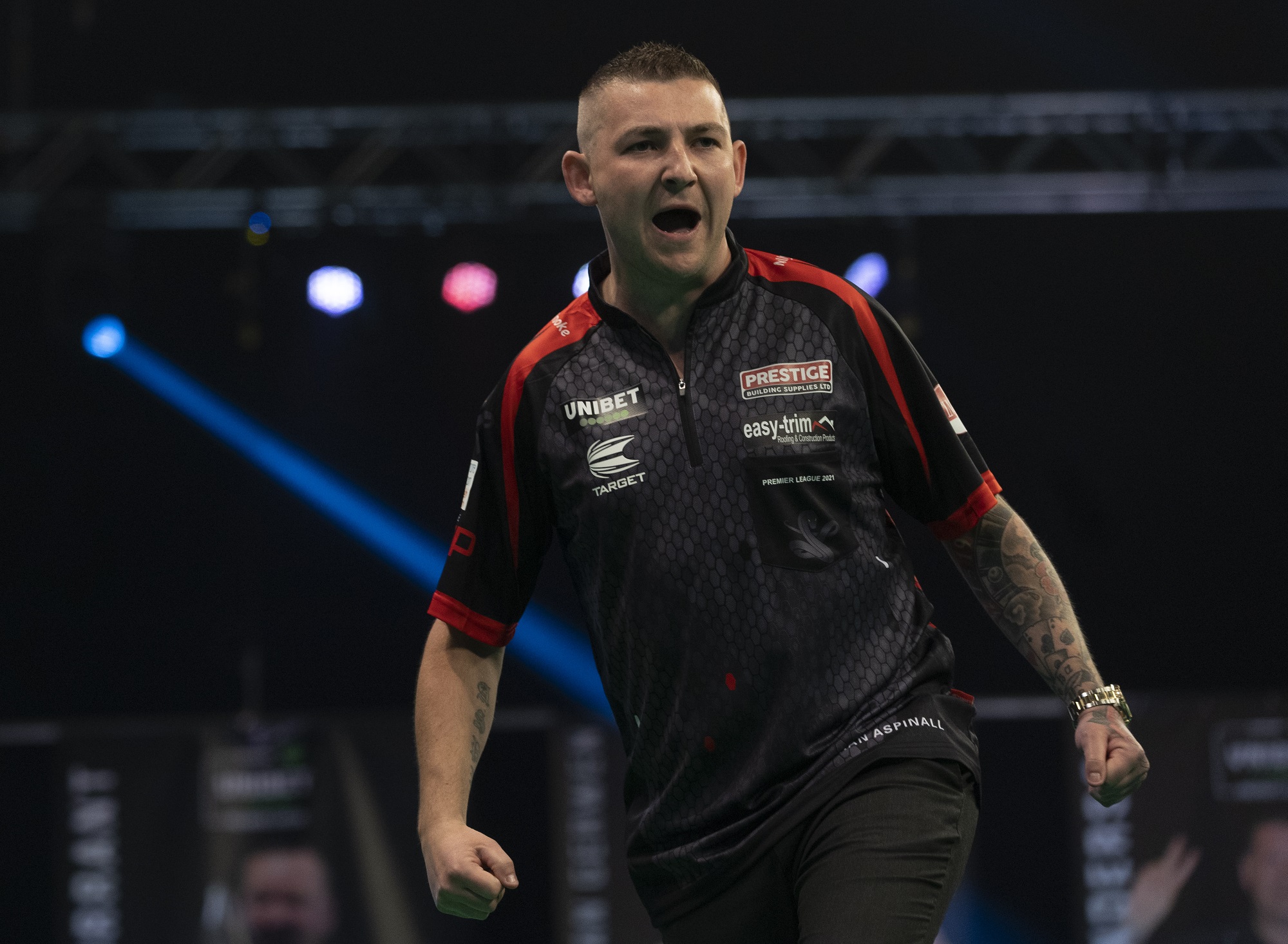 Nathan Aspinall thrashed Gary Anderson 7-2 to go top of the 2021 Premier League Darts table after phase one of the event.

The Asp, many people’s favourite to be sent home after night nine, was in complete control of the contest throughout. He averaged 14 points higher than The Flying Scotsman to go to the summit of the league.

Dimitri Van den Bergh is level on points with him, but behind him on leg difference. He let a 6-3 lead slip to draw 6-6 with James Wade in a high quality affair.

Nathan Aspinall ended his fantastic first phase of the 2021 Premier League Darts by thumping an out of sorts Anderson and go top of the league.

Both players held their opening leg, before Aspinall took full control of the contest. After holding to go 2-1 up, The Asp went 4-1 ahead in 25 darts, hitting tops and double 12 to do so. Anderson missed two to close the gap to 4-2, and  the 2019 UK Open Champion took advantage then found double 14 to move two breaks clear.

Aspinall then guaranteed himself a point with a 13 dart hold, before Anderson got his second leg on the board, hitting double eight to cut the gap. The Asp though finished the match off in style, hitting an excellent 102 shot, what he averaged throughout the game to complete the victory and firmly put himself in the top four. Anderson, by contrast, averaged just 88.35.

Dimitri Van den Bergh has been top of the league for most of the first nine nights. However, he finishes the first phase second, after letting a 6-3 lead slip against James Wade.

Both players held in 17 darts to start the match, before Wade got the first break with a 14 darter on his beloved double 10. The Dream Maker responded instantly though, hitting a 15 darter on his favourite double 18 to level up at 2-2.

The World Matchplay Champion would hold again, before a fantastic 129 checkout from Wade saw the contest all square again at 3-3. From there, the Belgian took a hold of the game, with a 12 dart leg to hold, followed by a 10 dart leg to break. Wade could have broken straight back, but missed inside on double five for an 85. Van den Bergh punished him, hitting a ridiculous 160 checkout to guarantee a point.

Wade, who averaged 103.06 in the game, would not go down with a fight. He did not allow Van den Bergh another shot at a double in the remaining three legs, as a 15 darter to hold, followed by an 11 dart break, got the game back on throw and into a 12th and final leg. There, The Machine produced an excellent 14 dart hold to get a point, and move himself back into the top four. Van den Bergh is second to Aspinall on leg difference.

For the second time in this Premier League, Michael van Gerwen followed up an excellent performance with a disappointing one. After beating Jose De Sousa with a 104.72 average last night, he lost 7-3 to Jonny Clayton this evening, averaging just over 91.

The Ferret held in the opening leg, before taking advantage of five missed darts from MvG in the second leg to eventually hit double one and go 2-0 ahead.

An 11 darter saw the Masters Champion move three legs clear, before eventually MvG got on the board with a 17 dart hold. Despite a lovely 129 outshot on the bull, he could not get a chance to break back on The Ferret’s throw, and the Welshman gained his point with a 14 darter in the eighth leg, getting a double break in the process.

MvG cut the deficit to 6-3, after Clayton missed two for the match, but it only delayed the inevitable. A 15 darter, finishing on double ten, gave The Ferret his first win in five matches. He’s outside the top four on leg difference, while Van Gerwen remains third despite the poor performance.

Peter Wright hit just 6/25 on the checkouts, as him and Jose De Sousa shared a 6-6 draw.

Both missed chances to break each other’s throw in the opening two legs, but both held to see the match at 1-1. Wright though did break in the second leg, hitting an 81 for a 12 darter.

Both players again missed darts at a double in the fourth leg, before Snakebite found double five to go 3-1 ahead. Despite leaving 141 for a nine darter in the fifth, Wright made a mess of finishing it, as he did not get a chance at a double. This eventually allowed De Sousa to hit double eight for a 14 dart hold.

Wright could have gone two legs clear once more in the sixth, but missed tops for a 69 outshot. The Special One then found double 16 to level up, before roles reversed in the seventh leg. De Sousa missed two for the leg, and Wright capitalised, hitting a magical 139 checkout to go a break ahead once more and lead 4-3.

Once again though, Snakebite could not press home the advantage. Missing three for the eighth leg, it gave De Sousa a shot at 48, which he took out on tops to level once more at 4-4. The former World Champion Wright left 36 after nine in the next leg, and despite missing three for it, and De Sousa missing tops for a 120, found double two to go 5-4 in front.

Wright held to guarantee his point, but his missed doubles in the earlier legs came back to bite him. The Special One found a 14 dart hold, followed by a fantastic 11 dart break, to secure a priceless draw. Both end the week on 9 points, one point from the Play-Offs.

Rob Cross secured a 7-5 victory over Glen Durrant in the first match of the night.

In the epitome of a dead rubber due to both being already eliminated, Voltage broke in the first leg, before Durrant responded with a lovely 110 checkout to get the break back immediately.

Two holds from each, including a 10 darter from Cross, saw the match level at 3-3. Both missed two darts for the seventh leg, but the 2018 PDC World Champion Cross eventually hit double three to break once more. Once again however, the three time BDO World Champion responded, hitting tops for a 16 dart break to level up at 4-4.

The crucial break came in the ninth leg, as Cross hit a 15 darter on double 20 to go in front, a break of throw he did not relinquish. Back to back 16 dart holds, with an 18 dart hold from Durrant sandwiched in between, was enough to see Voltage over the line.