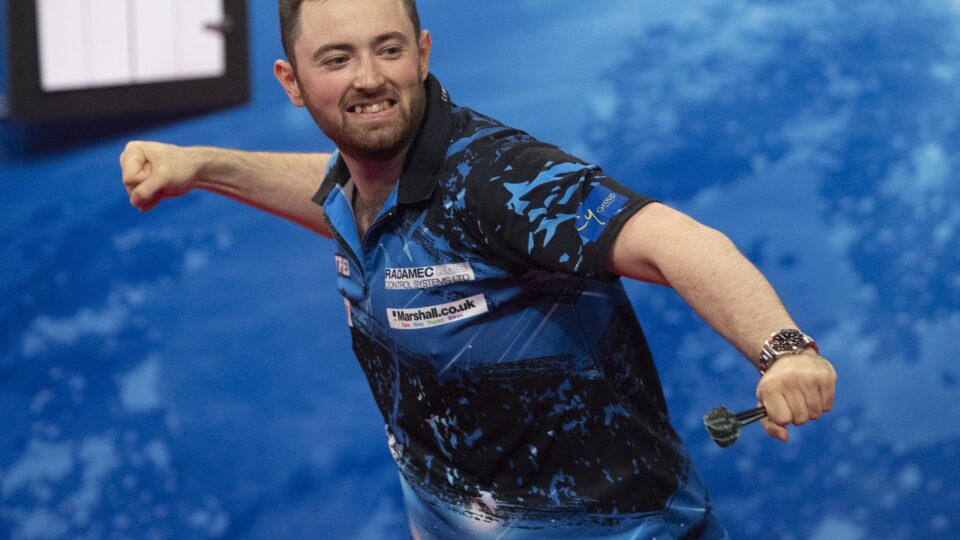 The Gambrinus Czech Darts Open played to a conclusion this evening with Luke Humphries coming out victorious to take the £25,000 first prize. ‘Cool Hand’ claimed his second Pro Tour title of the season as he overcome Rob Cross in the final.

Humphries made the perfect start as he broke the Cross throw in the opening leg. Cross responded to even things up before Humphries won three successive legs to open up a 4-1 lead. Leg 6 saw Humphries miss the bull for a 167 checkout. It was a miss that Cross capitalised on, taking out 145 to break in 12 darts. Leg 10 saw Cross draw level, partly courtesy of four missed darts at double by Humphries before the former World Champion pinned double 10. Not to be undone, ‘Cool Hand’ regrouped and took the next three legs in 15, 12 and 14 legs respectively to claim the title.

Humphries had earned his spot in the final having fought past Jose de Sousa in the semi-finals 7-4, firing in a 170 checkout along the way. This was after the former World Youth Champion had put paid to Michael van Gerwen’s chances of victory in the quarter finals, beating him 6-4.

‘Voltage’ had defeated Vincent van der Voort in the other semi-final by the same 7-4 scoreline. The Dutchman had led 4-1 before Cross reeled off six legs on the spin to set up an all-English final. Cross had seen of the spirited challenge of Ross Smith in the quarter finals, winning out 6-4.

In the other quarter finals, Jose de Sousa set up his meeting with Humphries by beating Rowby-John Rodriguez 6-2 courtesy of a 101 average. Vincent van der Voort ended home hopes by beating Adam Gawlas by the same scoreline in the final quarter final.

The story of the session and arguably the weekend so far gained momentum as home favourite Adam Gawlas continued his fairytale run which took him through to compete in the final session of the tournament. He overcome Ryan Searle 6-5, averaging 93 and hitting five maximums in the process. It was all going the way of the man from Devon as he raced into 3-0 and 4-1 leads but the Czech youngster responded. Searle can feel hard done by as he had a bounce out with a match dart at tops but it mattered little to the home fans seconds later when Gawlas coolly checked out 100 on his final dart.

Until that point, Michael van Gerwen had stole the show, defying a 25% checkout success rate to still average 108.52 in beating Mickey Mansell in a deciding leg shootout. The match appeared to be going according to the script when Van Gerwen fired in an eleven dart break of throw to lead 4-2. Mansell had other ideas however and took the next 3 legs including an eleven dart break of his own to lead 5-4. ‘Mighty Mike’ wasn’t to be denied though, breaking in eleven darts once again before finishing the job on his fifth match dart.

Luke Humphries continued his good form of late, defeating Dimitri van den Bergh 6-4. Dimitri appeared to gain the upper hand when earning the first break of the contest to lead 4-3 but ‘Cool Hand Luke’ responded to take three legs on the spin to earn his spot in the quarter finals.

Ross Smith made it a hat-trick of notable wins for the weekend as he made it through to the quarter finals. Having already beaten Florian Hempel and Joe Cullen to get this far, ‘Smudger’ put paid to Dave Chisnall’s hopes by defeating the St. Helens man 6-4.

The first game of the afternoon saw Rowby-John Rodriguez and Dirk van Duijvenbode take the stage, the ‘Aubergenius’ missing two match darts before the Austrian closed out a deciding leg victory.

Jose Justicia’s good run this weekend came to an end as he also lost in the final leg of the match after having chances to close the show himself. He squandered three match darts as Jose de Sousa won through, the ‘Special One’ averaging just shy of 99.

Rob Cross eased through to the evening session as he dispatched an under par Ricky Evans by 6 legs to 2.

In the final game of the afternoon, Adrian Lewis failed to repeat his Friday heroics and fireworks of defeating Gerwyn Price. Vincent van der Voort raced into a 5-0 lead and while Lewis responded to put some respectability in the scoreline, the Dutchman eased home 6-3.