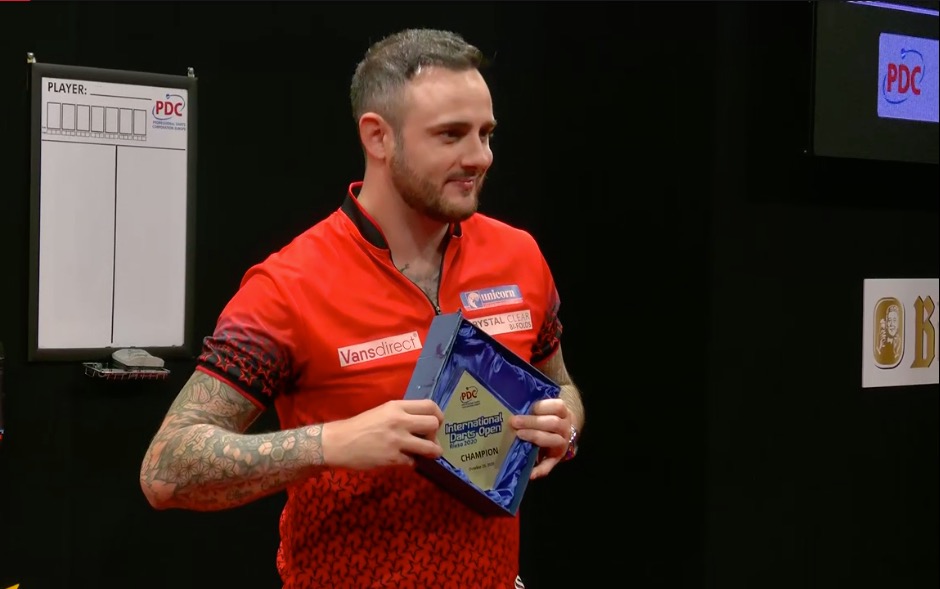 The final day of the International Darts Open saw Joe Cullen claim his second Euro Tour title of his career.

Cullen played excellently throughout the day in Riesa, eventually beating Michael van Gerwen 8-5 in the final. It was the same scoreline that he beat the Green Machine last year for his first Euro Tour title.

The Rockstar made the final day thanks to a comfortable win over Robert Marijanovic on Saturday, and started well on Sunday. He punished missed doubles from Dave Chisnall to win 6-1 and move into the night session.

In his first game, he beat Ross Smith 6-4 in a close affair, before producing a stunning performance to win 7-3 against Michael Smith in the semi final.

That set up a final against van Gerwen, in a rematch of last year’s European Darts Matchplay final. Van Gerwen, who had survived match darts against Andy Hamilton and Mensur Suljovic, started brighter. He hit a 116 checkout to hold throw in the opening leg, before carving out chances on Cullen’s throw to break. However, the Green Machine could not take those chances, meaning the Rockstar held his nerve and throw to keep the match level at 2-2.

The crucial moment came in the fifth leg. Cullen missed bullseye for a 170 checkout, and MvG could not get to a finish on 107. This allowed the Rockstar to clean up the 25 points remaining, and get a crucial break of throw to lead 3-2. After six straight holds of throw, Cullen was leading 6-5, when another pivotal moment went his way. He missed double 14 for the leg, and van Gerwen had 82 remaining. The Rockstar though kept calm, showing why his double hitting had been so good all weekend, hitting double seven to seal the leg and go one from victory.

Cullen hit a 180 in the next leg en route to leaving 57 after 12. He duly took out the single 17, double top finish to win 8-5 and take home his second title on the Euro Tour. For van Gerwen, it’s the first time he’s not won a Euro Tour event since 2013.