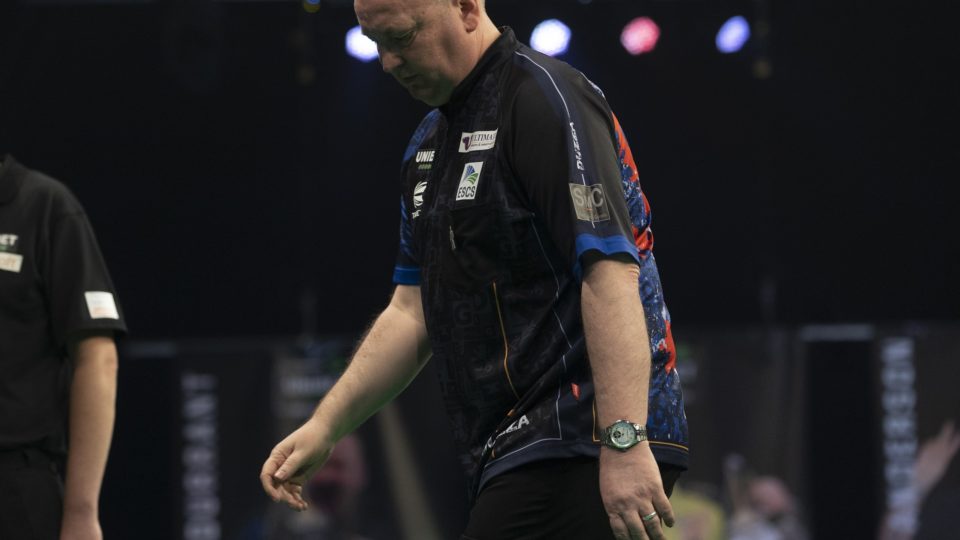 Glen Durrant became the first player to be eliminated from the 2021 Premier League Darts on night seven of the event.

Duzza, who won the 2020 edition of the tournament in October, lost to Jose De Sousa 7-4 to confirm his exit from the tournament. It’s the first time that a defending champion has been relegated the following season.

Having not won a single point in his previous six 2021 Premier League Darts games, the odds were near on impossible for Durrant to stay in the league. However, his loss to De Sousa tonight confirms that he will be one of the two players eliminated after the first phase.

Like last night, Durrant held in the opening leg, before missing three darts to break and go 2-0 in front. De Sousa, who’d missed two in the previous visit, found double 10 to level up.

A 105 checkout from Duzza saw him go 2-1 up, before three further holds saw the match level at 3-3. The Grand Slam Champion got the break in the seventh leg, hitting six perfect darts in the seventh leg before settling for an 11 darte. Despite missing eight darts for the eighth leg, the Portuguese player eventually found double one to consolidate the break, after Durrant missed the bull for a 123.

An 18 dart leg from Durrant cut the gap to one, but a 16 dart hold, followed by another excellent 11 dart break, saw De Sousa get over the line and eliminate the man from Teeside.

Dimitri van den Bergh remains at the top of the 2021 Premier League Darts, winning 7-4 against Rob Cross to send his opponent into the elimination zone.

Both broke each other’s throw in the opening two legs, before each held to see the match level at 2-2. In the fifth leg, Cross missed bull for an 86 checkout, and from there, the World Matchplay Champion took control, as a 96 outshot saw him break the Cross throw once more. 43 darts later, he’d secured a point, going 6-2 up by winning three legs on the spin, including a fabulous 124 checkout.

The Belgian could have won the match 7-2, but missed two darts in the ninth leg. A 97 outshot from Cross, followed by an 11 dart break from Voltage, closed the gap. However, it only delayed the inevitable, as a 15 dart break on double eight saw Van den Bergh over the line, becoming the first person to reach 10 points in this year’s league.

James Wade moved clear of the elimination zone with a 7-4 victory over Peter Wright, pushing Snakebite into a battle to survive phase one.

The Machine took control of the game early on, breaking in leg one with a 100 outshot, and holding in 18 darts to go 2-0 up. Three further holds saw Wright trail 3-2, before Wade missed a second dart at tops for a double double finish. Snakebite struck, hitting double 16 to get the break back and level at 3-3.

Wright took the lead in the next leg, comfortably holding in 14 darts. Wade levelled in the next leg, before Wright missed double 12 for a 141 outshot in the ninth. The UK Open champion pounced, taking out tops to break once more and go 5-4 ahead. A 13 dart hold followed to guarantee a point, before Wright missed tops for an 82 checkout to keep the game alive. A 96 checkout followed from The Machine, ending the contest and getting a huge win to massively improve his survival chances.

Jonny Clayton survived match darts against Nathan Aspinall to earn what could be a priceless point.

The Ferret had chances to win both of the opening two legs, missing three in leg one, and the bull in leg two. This allowed The Asp to take an early lead, going 2-0 up in 31 darts.

Two further breaks saw Aspinall lead 3-1, before a stunning 121 checkout from The Ferret once again got the gap back to one. The Premier League runner up responded brilliantly, finding a 124 in the next leg to regain a two leg cushion at 4-2.

Clayton however would not go down without a fight. He took advantage of a missed dart from Aspinall in leg seven to find a 13 dart break, while a 13 dart hold in the next leg got the game level at 4-4. Two reasonably comfortable holds followed, leaving the match poised at 5-5.

Aspinall got his point with an 18 dart hold, before missing two darts at tops in leg 12 to get the victory. It allowed the Masters Champion another shot at double 16, which he missed in the previous visit. This time, he took it out, to make sure the spoils were shared.

MvG missed two darts to win the opening leg, and poor doubling cost him in the match, finishing just 6/21 on the checkouts. Anderson took advantage, hitting tops for an 80 shot to go 1-0 in front. The lead did not last though, as Van Gerwen cleaned up 25 in the next leg to break straight back.

The Flying Scotsman had a chance to break in the third leg, but missed bull for a 129 outshot. Double 12 was found by Van Gerwen to hold, with three further holds seeing the match still level at 3-3.

In the seventh leg, The Green Machine missed six darts for the leg, while Anderson missed double 14 to pinch it. Eventually, the world number three hit double five to lead 4-3. The Flying Scotsman then missed five darts in the eighth leg, and MvG took advantage, hitting double nine for an 18 dart break and to go 5-3 ahead.

Once again though, Van Gerwen could not press home the advantage, missing two darts to guarantee a point in the ninth leg. Anderson punished, hitting tops for a 50 outshot to break back immediately, and holding to level the match at 5-5, before both held once more to each secure a point.