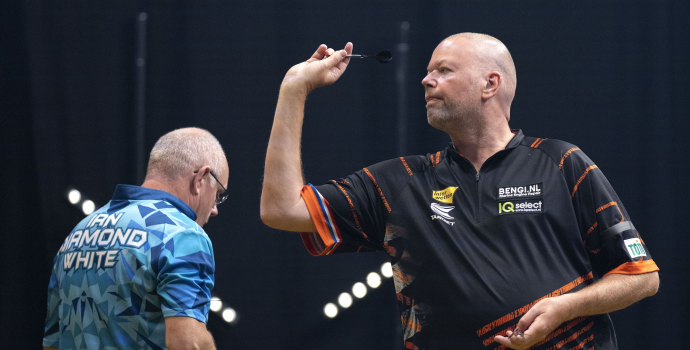 The latest leg of the European Tour got underway today in Jena with round one throwing up a few surprises.

A number of high profile withdrawals from the competition meant each session was reduced to six matches but they provided plenty of quality.

Barney Back With A Bang

Raymond van Barneveld enjoyed a dream return to European Tour action as he dumped out Ian White without dropping a leg. With ‘Diamond’ far from his best, Barney took full advantage, improving as the tie went on before closing out victory with legs of 13 and 11 darts respectively. His win sees him face world champion Peter Wright on Saturday.

Whitewashes appeared to be the Dutch order of the evening as both Barney’s compatriots Geert Nentjes and Danny van Trijp completed similar victories to win through to Saturday’s action. Van Trijp defeated John Henderson in the opening match of the match before Nentjes averaged 98 to impressively dispatch the in-form Josh Rock.

Martin Lukeman silenced the home crowd as he put paid to Gabriel Clemens’ hopes. Remarkably, Clemens averaged over 107 as he fell to a 6-1 defeat to ‘Smash’, whose love affair with European Tour continues. Englishman Lukeman averaged almost 104 in victory, including two 12 dart legs before closing out victory with a 13 darter.

Daryl Gurney set up a clash with Dirk van Duijvenbode after he beat Connor Scutt 6-3, an 11 dart opening leg setting the tone for ‘Superchin’.

German hopes lie in the hands of Dragutin Horvat after he made it past Jeff Smith in the afternoon session. It was by no means a classic, Smith’s opening leg of 16 darts proving to be the best of the contest, but it did contain a majestic 130 finish on the bull from Horvat on his way to a 6-4 and a clash with Jose de Sousa on Saturday afternoon.

Bradley Brooks averaged 95 as he inflicted a first European Tour first round exit on Scott Williams. Brooks took a 5-3 lead thanks to a magnificent 136 checkout and he closed out the win in the very next leg. He faces Dave Chisnall on Saturday.

Jim Williams survived match darts against Karel Sedlacek before winning through in a deciding leg to set up an all Welsh clash with recent New South Wales Masters winner Jonny Clayton. Daniel Larsson and Luke Woodhouse also won through in the eleventh and final leg of their matches, beating Jamie Hughes and Keane Barry respectively. Larsson faces Luke Humphries next while Woodhouse will play Ryan Searle.

David Evans won through the opening match of the day, beating Martijn Kleermaker 6-3. He will play Dimitri van den Bergh on Saturday night.

Results and Order of Play