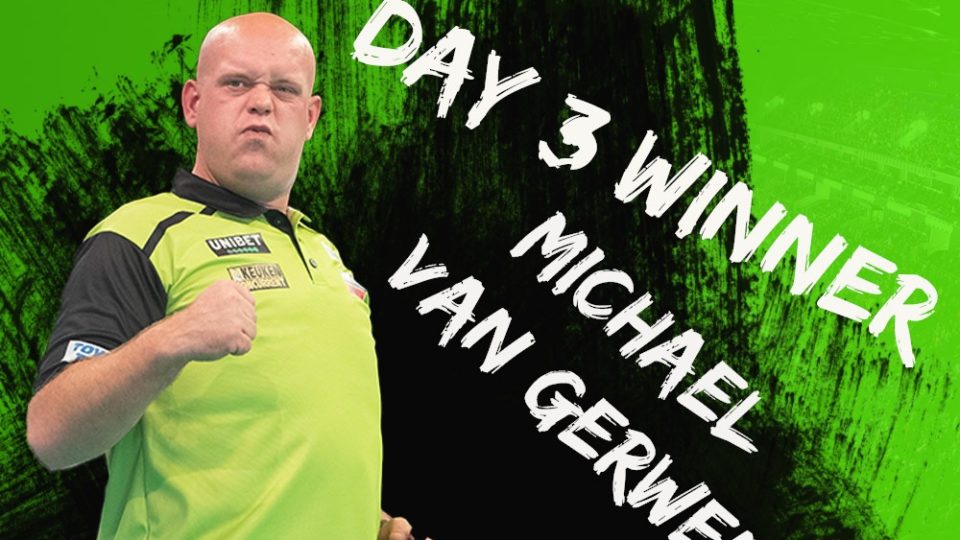 Michael van Gerwen appears to have made a return to form after picking up the title on day three at the autumn series.

The world number one was unceremoniously dumped out of this years Premier League just 8 days ago; But a victory in Niederhausen has quashed talk of a crisis, for now at least.

Elsewhere on day three of the Autumn Series:

A swap back to his ‘old faithful’ darts on day two had many believing this title would come yesterday. However, Aussie Damon Heta put an end to that on his route to his first PDC ranking tittle.

The darts re-appeared once again today, and the green machine made the most of his change in equipment. As Michael van Gerwen returns to winning ways.

An opening victory against former world finalist Andy Hamilton got the day started. This was followed up by 4 consecutive victories in which Van Gerwen averaged over 100.

Reece Robinson was the first victim on this run as he fell 6-2. That was swiftly followed by compatriot and form man from the start of the year Dirk van Duijvenbode losing 6-0.

In the last 16 Mighty Mike saw another of his recent hoodoo’s lifted. At the fifth time of asking Glenn Durrant finally fell to van Gerwen as he produced his finest darts of the day. MvG got out the blocks rapidly and heaped the pressure on Glenn. A 4-0 lead with a 118 average seemingly putting this one to bed. Duzza did manage to get 2 legs on the board, but there was little he could do to turn the tide, and the result of the match.

Revenge was next on the list. After falling to Damon Heta yesterday, the pair found themselves facing off once again in day three action. This time the result was flipped in spectacular fashion as the Aussie crashed out with a 6-0 loss despite averaging 96.9

From that moment on, it was another ominous final part of the day for MvG. He defeated youngster Nick Kenny 7-4 in the semi-finals before ensuring it was his title in the final. A swift 8-1 thrashing of Mensur Suljovic sealing the deal.

Worrying signs now for the rest of the field, as van Gerwen will now go in hunt of a second title in 2 days on day 4.

Nick Kenny and Lisa Ashton were two of the standout performers on day 3.

Both players secured their tour cards in January, and put in career best runs on the pro tour today.  Kenny ultimately being the player to bring an end to the Lancashire Rose’s run.

Lisa was comfortable as she progressed to her board final. Wins over Jamie Hughes and Alan Tabern setting up a class with Boris Krcmar. Croatian Krcmar has already being doing the rounds on social media this week follwoing his unusual check out of 70 against Dave Chisnall. He started the brightest in this one jumping out to a 4-0 lead over Ashton.

Ashton battled back to 4-3 but appeared to have let the game slip when Krcmar won leg 8. However, another 3 legs on the spin for the four times ladies World Champion, saw her progress to round 4.

Her performance significantly improved at this stage as Ashton put an extra 7 points on her average from the day, but ultimately it was Kenny that moved on.

The Young Welshman had a fine day on the oche also.

Wins over the form man Devon Peterson, Simon Whitlock and James Wade, along with that victory over Ashton saw him in to the last 8. From there, an solid win over Ross Smith, who had earlier accounted for Gerwyn Price, put Kenny in to the semi’s where he took on Michael van Gerwen.

Early losses for Johnny Clayton, Steve Beaton and Chris Dobey have put a dent in the hopes of the trio making it to the Grand Prix.

A second good run from Damon Heta has the Aussie now sat in the final qualifying spot.

Quarter final runs for both Luke Humphries and Ross Smith mean the pair still have a chance of sneaking in. They’ll need two strong days to really keep the pressure on those ahead of them.

Mervyn King’s trip to the last 16 yesterday backed up with a board final today means he now occupies the 17th spot. He, like the others in the chasing pack will be looking for a very good run on one of the next two days if hes to keep his consecutive appearances record in tact.

How can I follow day four of the Autumn Series?

We’ll have day four, and the rest of the Autumn Series, covered at Online Darts.