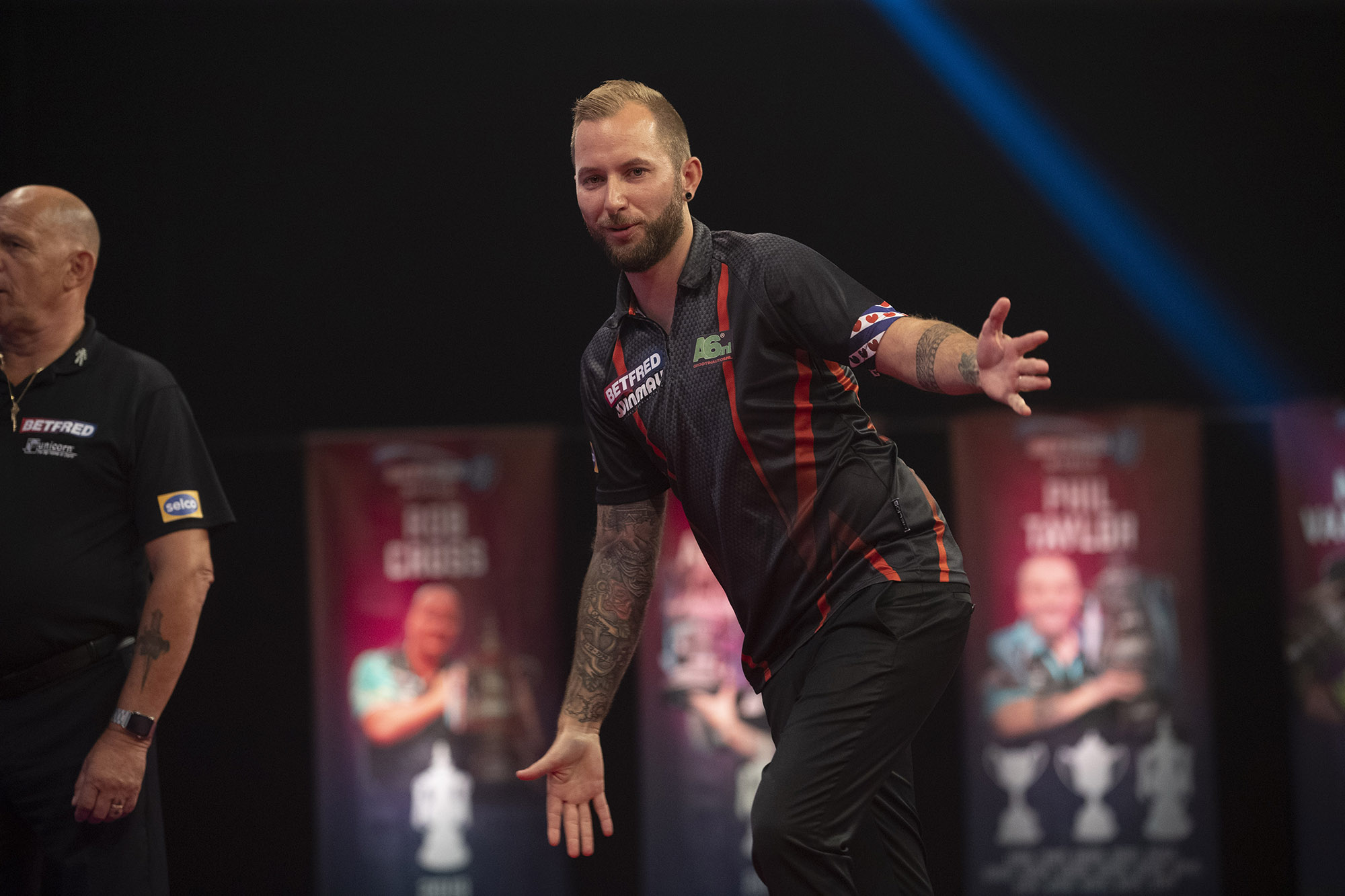 Danny Noppert caused the biggest upset of the week on day three of the Betfred World Matchplay.

The Dutchman knocked out the number three seed Gerwyn Price 10-7 in a scrappy tie.

Elsewhere on day three of the World Matchplay:

No problems for Noppert

Danny Noppert ensured Gerwyn Price’s miserable Matchplay run would continue. The Welshman has not won at the tournament since 2016.

Noppert started brightly, getting a break of throw in the third leg to go 2-1 up. He missed a chance to get a double break in the fifth leg, which Price capitalised on to go into the first interval 3-2 behind.

Price got the break back with a 70 outshot in the eighth leg to make it 4-4, but Noppert broke straight back in the next leg with an outshot on D20. He then held his throw to make it 6-4 going into the second interval.

After trading breaks in the next two legs, Noppie got the crucial double break in the 13th leg, going 8-5 up with an 89 finish on the bullseye. Despite missing four match darts in the 16th leg for the match, the Dutchman would not be denied in the next one. He took out an 88 shot for a 12 dart break of throw and sent the two time Grand Slam champion home early from the Matchplay again.

An ecstatic Noppert told Online Darts afterwards: “It’s a real good performance. Gerwyn was not performing good, but I win and that’s the most important thing.

“Today, was not good, but I’m the most happy man in the world at the moment.”

Joe Cullen was beaten 10-0 in Blackpool by Ian White last year. This year, the Rockstar got his revenge, beating White in a sudden death decider.

Cullen went 3-0 up on White, getting an early break in the second leg. However, Diamond would not go quietly, pinging in a 118 checkout to get the break back and go into the first interval 3-2 behind on throw.

White got the next break of throw, eventually pinging D8 to go ahead for the first time in the match at 5-4. Cullen then bust his score in the next leg, allowing White to hit D20 for a 21 dart hold and take a 6-4 lead into the second interval.

Diamond went 8-4 after getting a double break straight after the interval, but Cullen came roaring back. After White missed three darts for the 14th leg, Cullen got one of the breaks back by pinging D10 for 8-6. White then bust his score in the 16th leg, leading the Rockstar to hit D10 with his last dart, and get us back to 8-8 after winning four straight legs.

Both men then held their throw, sending us into extra time. Cullen had a chance for the match in the 22nd leg, but missed D10. He also had two further chances in the 24th leg, but again missed two match darts. This allowed White to hold his throw and take us into a deciding 25th leg.

Cullen once again scored well to start the leg, and despite missing two match darts, eventually found D16 to go through 13-12 and end a Matchplay classic.

The Rockstar spoke to Online Darts after his win. He said: “I can’t remember the last time I felt as good going onto stage. I got the job done in the end, and I’m sure… I’ll find the positives from the game.”

Vincent van der Voort also advanced on day three of the World Matchplay. He beat Dave Chisnall 10-6 in the opening game of the night.

The Dutch Destroyer broke Chizzy in the opening leg, after Chisnall missed two darts for the leg. He then got a double break, by pinging D10 for a 3-0 lead.

Chizzy came fighting back. After pinging an 81 on the bull to get his opening leg, he then reeled off four straight, moving into a 4-3 lead after the Dutchman missed five darts to take it himself. Van der Voort got the break straight back though, and both held their throw to make it level at 5-5 heading into the second interval.

After Chisnall hit the opening leg after the break, he would not get a chance at a double for the rest of the match. The Dutchman came alive, as he scored brilliantly to reel off five straight legs and beat the St Helens native 10-6. It was his first win at the Matchplay in nine years.

Van der Voort told Online Darts after his win: “A win is always great in such an amazing tournament. The World Matchplay is after the Worlds the biggest tournament wise so yeah, I’m pretty happy.

He was also vocal in wanting the Matchplay to move permanently away from Blackpool, adding: “if they do that, they have my blessing. It’s not only the venue, but the whole city looks for renevation.”

Beaton started brightly, picking up a break of throw in the third leg to go 2-1 up. Jackpot broke straight back with an 11 darter, and held his throw to go 3-2 up into the first interval.

The two time World Champion then had to wait until the 10th leg to get his next break. With the Bronze Adonis left on 60 to level the match, Lewis pinged D16 to get the break and go into the second interval 6-4 up.

Beaton stayed the one break of throw behind though, eventually levelling up the game at 8-8 with a magnificent 111 checkout. After both players held their throw, the game went into extra time at 9-9.

Lewis then went ahead 10-9 with a brilliant 104 checkout, and won the match with a 72 checkout in the next leg to book a place in round two.

After his win, Lewis told Online Darts: “After the Summer Series, I thought this might be my last Matchplay. I put that much work into losing weight, and trying to do everything right, but I was thinking where do I go from here?

“I’ve been in this a long time, and I’m trying to do different things, but I’m not just playing enough to compete.”

Gurney goes through to round 2

After Gurney missed a chance to break the throw in the opening leg, both men held their throw in the first session. This meant that Evans led 3-2 going into the first interval.

It was a similar story in the second session, as both men continued to hold their throw and not offer their opponent chances to break. It was level at 5-5 at the second interval.

The match changed in the 11th leg. Evans missed two darts to hold his throw, and the Northern Irishman hit D10 for 6-5 and the first break of the match. It would be a repeat story in the 13th leg, as Superchin once again punished two missed darts at double from Rapid Ricky to get a double break and lead 8-5.

The final leg saw a similar story. Once again, Evans missed two darts to hold his throw, and Gurney pinged D16 to win his fifth straight leg of the match and come through 10-5.

Speaking to Online Darts after his win, Gurney was not happy with his performance. He said: “It was good at the end, but whenever you’re playing against the top top players, I would have lost that game early on.

“I need to sharpen up, but I’m practising really really well. When you go up and do a display like that, it’s really disappointing.”