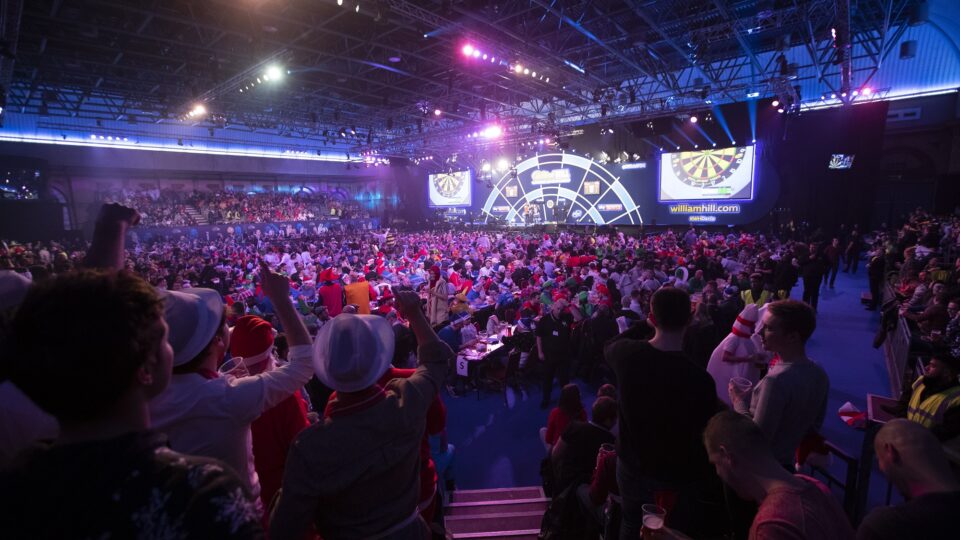 In a tournament predominantly played behind closed doors, The Iceman completed a remarkable seven year rise, from winning his tour card to be the best player on planet darts.

Now, Price returns to Muswell Hill looking to be the fourth player to defend the title. He’s in action on opening night, alongside a player who’s already achieved the feat.

As fans are welcome through the doors of Alexandra Palace once again, here’s what to expect on night one of the PDC World Darts Championship.

The opening match of the tournament will determine who takes on the defending champion in the final match of night one.

Ritchie Edhouse will take on Peter Hudson first up, after Hudson replace China’s Lihao Wen due to Wen not receiving his visa in time. Edhouse has had a great year so far, reaching three Pro Tour quarter finals, and making the first round of the European Championship. Hudson meanwhile lost out in the final Tour Card Holder qualifier event, but now has a chance to make some huge gains up the PDC Order of Merit rankings.

Whoever is victorious will be staying around the Alexandra Palace, with the daunting prospect of the World Champion next up. While he’s won multiple Pro Tour and Euro Tour titles, on the TV it’s been a story of near misses in the main for Price. Runner at the World Grand Prix to Jonny Clayton. Semi final at the UK Open. Quarter final at the World Matchplay and the European Championship.

The only TV title he’s won in 2021 is the Grand Slam of Darts, his third in four years. However, no defending champion has gone out in the opening round of the Worlds since John Part in 2009. Can either Edhouse or Hudson produce a big shock on night one? Or will The Iceman move into round three of the Worlds for the third straight year?

The remaining first round ties start with Ricky Evans against Nitin Kumar. Evans has had a difficult year on the Pro Tour this year, failing to make it past the last 16. He also went out in the last 32 of the UK Open, and the opening round of the Players Championship Finals.

Rapid Ricky takes on a familiar face to the World Darts Championship in Kumar. He’s won the Indian qualifier three out of the last four years, but has failed to win a set on each of his previous two visits to the Palace. Can he change that record this evening, or will Evans move onto face Daryl Gurney tomorrow afternoon?

In the third game on, back to back World Champion Adrian Lewis faces Matt Campbell in one of the ties of round one. Jackpot has impressed this year, reaching a final on the Pro Tour, alongside two semi finals. In addition, he looked in good form at the Players Championship Finals in round one against Kim Huybrechts, before missing match darts against eventual winner Peter Wright in round two. The two then exchanged words on stage, before Lewis went on social media to call Snakebite a cheat.

However, the Canadian has yet to win a game on the Ally Pally stage, losing out in the first round of the last two events including in a classic to Scott Waites last year. Will it be third time lucky for Campbell, or will it be Lewis who sets up a showdown with Gary Anderson in tomorrow’s evening session?