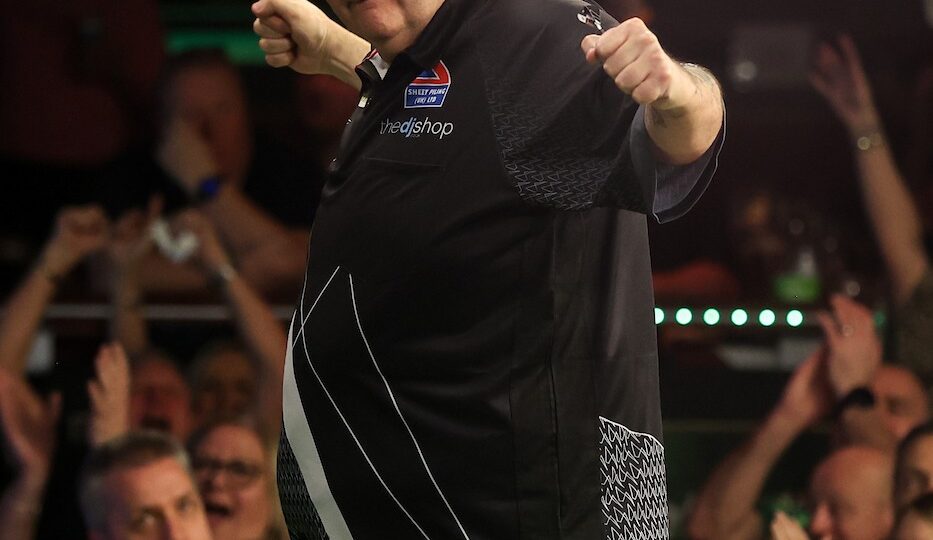 Phil Taylor beats Peter Manley 3-1 on his return to the Circus Tavern.

Also on day two we saw,

Taylor returns with a victory

Peter Manley had the throw in the first set and five holds of throw saw Manley win set one.

Second set was dominated by The Power after an early hold, he got the first break of the game before holding with ease to level the game.

Phil found another gear after the break, with a drop in standard from Manley, saw The Power win six of the next seven legs to wrap up the victory against the man he beat twice in world finals to 0.

Phil Taylor will need to produce his best in his next game, as he will take on the very impressive Kevin Painter

Kevin Painter won all nine legs in a demolition job over Wayne Warren. After being involved in a classic yesterday in which he defeated Tony O’Shea 3-2, it was a lot  easier for The Artist who won every leg and set an high standard in the opener.

Wolfie into round three

It showed at the start of the game that being on the Circus Tavern stage yesterday gave Howson the advantage. He took the opening set 3-1. Martin Adams responded with a 3-1 set win of his own that included an opening leg 156 checkout from Wolfie.

The third set could of gone either way, with Adams unable to get a dart at a double from 125 and the Howson fan club were very vocal when he won the leg to move one set away. Martin Adams levelled the game in spectacular finishes of 150 and 157 to make it four ton plus finishes.

Wolfie showed his experience in the final set with an early break before an early hold to get a 2-0 lead in the final set. Martin Adams went on to win it in style with a 153 checkout to book his place in the third round.

Terry Jenkins rolled back the years when he only dropped two legs in defeating the Dutchman. The famous walk on was for Jenkins and the fans coming to Circus Tavern this weekend get to see it at least once more on Saturday.

The most impressive performance on Friday Afternoon came from American Larry Butler, who got the better of Alan Warriner-Little 3-0 winning all nine legs.

Larry finished the game with an average of 93, but for much of the first two sets he was performing closer to the 100 mark. Larry Butler’s next opponent will be Keith Deller.

Keith has been very vocal on social media about the about of practise he’s been putting in and if he brings his top game we could be in for a cracker.

Dave Prins defeat Paul Lim 3-1. Dave Prins looked the more settled and went into the break with the advantage. The experience of Paul Lim started to show in the third and The Singapore Slinger halved the deficit in sets.

Dave Prins, who came through the qualifier in November last year, found another gear in the fourth set and won 3-1.

John Walton defeated Les Wallace 3-2 in the opening game on Day Two. John Walton looked in total control after two sets, even with Wallace firing in two ton plus checkouts.

Les Wallace who looked very nervous to begin certainly looked more solid after the interval, and won the next two sets to make sure we was going all the way in the opener. It was John Boy who won the final set coming from a leg behind to wrap up the win.