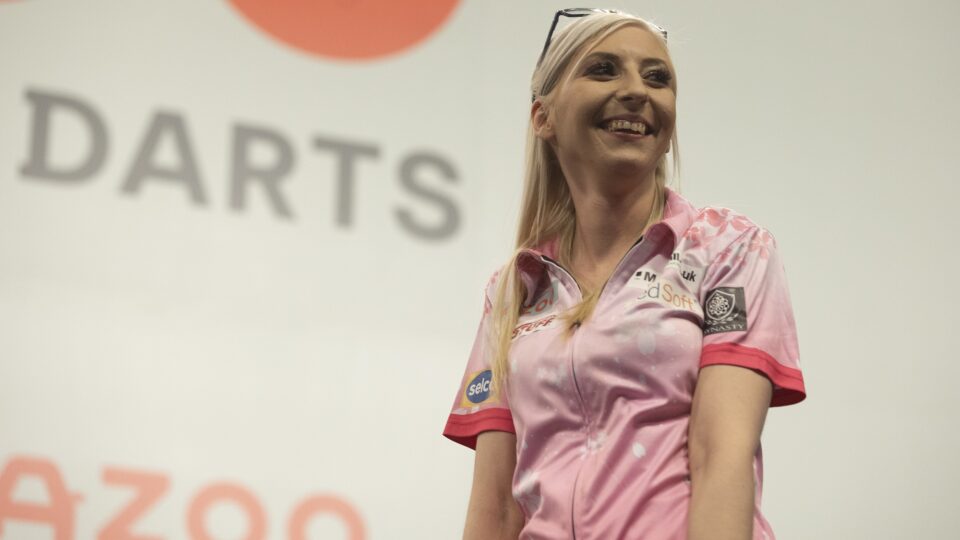 Fallon Sherrock is into the last eight at the 2021 Grand Slam of Darts.

After beating Mensur Suljovic at the World Darts Championship two years ago, The Queen of The Palace comfortably won 10-5 against the same opponent in Wolverhampton.

It makes Sherrock the first woman to ever make the last eight of this event. She will play Peter Wright in the quarter finals on Saturday, after the World Matchplay Champion squeaked by Jose De Sousa in a last leg decider.

Sensational Sherrock does it again

Despite all the talk after her stunning 170 to beat Gabriel Clemens and make the knockout stages, Sherrock kept her composure to reach the last eight of a PDC TV ranking event for the first time.

Suljovic started the brighter, breaking in the opener, before holding with an 80 outshot. However, Sherrock would find her groove. After hitting a 100 for an 11 darter to get on the board, she found a 124 finish on the bull to level, followed by double nine in the fifth leg to take a 3-2 lead at the first interval.

The Austrian levelled after the interval, before both missed darts to win the seventh leg. In the end, the Women’s Series champion found a crucial double five to go in front, before going three legs clear 25 darts later. The Gentle though responded at the end of the session, finding a 14 dart hold to trail 6-4 at the second interval.

It did not deter Sherrock at all however. 48 darts after the interval, The Queen of the Palace was one away from completing the job, going 9-4 up. Despite a 106 from Suljovic, it only delayed the inevitable, as the Women’s Series Champion hit double nine in the next leg to complete the victory.

In a match to rival their all time great games, Michael van Gerwen continued his undefeated record in the last 16 of the Grand Slam of Darts with a 10-7 win against Gary Anderson.

MvG broke in 11 darts in the first leg, but The Flying Scotsman responded instantly, hitting a 124 on the bull to level. Three holds followed, meaning Anderson led 3-2 at the end of the first session.

Three further holds meant the match was level at 4-4, when The Green Machine found the crucial break of throw. After hitting a 116 the previous leg, he found double eight to break and go 5-4 in front, before a 70 checkout saw him take a two leg lead at the end of the second session.

In the 16th leg, Anderson again missed a dart to level, allowing Van Gerwen to hit an 82 to go within a leg of the match. The two missed four darts to take the 17th, but The Flying Scotsman pinned double 15 to extend the game.

However, his luck could not continue, as he missed a dart to level and send the match all the way. MvG, who’d hit the 25 instead of the bull the previous visit, cleaned it up on double eight to bring an epic match to an end, in which there were 14 180s.

In the first and only last leg decider of the last 16, Peter Wright knocked defending champion Jose De Sousa out.

Wright found a break in the opening leg before both held throw comfortably. The World Matchplay champion then missed bull for a 127, allowing De Sousa to ping 76 to level up the match. The Special One then cruised to a 15 dart leg to take the lead, going ahead 3-2 at the end of the first session.

Both players held twice in the second session, but De Sousa created half chances on the Wright throw throughout. The pressure eventually told in the 10th leg, as the defending champion found a deserved break of throw, hitting double 16 for a 16 darter to go 6-4 up at the second interval.

45 darts later, the World Matchplay Champion went ahead, as he came out of the interval firing to take a 7-6 lead. However, De Sousa would not give up his crown easily. A 14 dart break, followed by a 13 dart hold, gave him the lead once more, before he missed three darts to go within one of the match. It allowed Snakebite to take out double 16 to once again level, this time at 8-8.

In the next leg, De Sousa squandered another chance to go within one, and Wright responded, hitting 82 to break. Both players then missed five darts to win the 19th leg, but De Sousa hit double 10 with his sixth game dart to take us to a decider. However, the Portuguese Man O’Scores could not find big trebles, allowing Snakebite to cruise to the finish. Leaving 62 after 12, he took it out on double 16 to end a tight and tense contest.

Michael Smith made his third straight quarter final appearance at the Grand Slam of Darts with a 10-5 victory over Joe Cullen.

Cullen missed three darts to hold in the opener, allowing Smith to break on 80. After both held, The Rockstar had a chance to level, but missed a dart at double 16 in the fourth. The Bully Boy capitalised again, hitting a 76 shot to remain two in front.

The pair then squandered six darts to win the fifth, but Cullen eventually hit double 16 to trail 3-2 at the end of an eventful session, in which he hit 2/13 on the outer ring. After Smith squandered two to win the sixth leg, The Rockstar found double seven to level at 3-3.

Once again though, Cullen could not find big checkouts at crucial moments. He missed three at double 18 to take the lead for the first time, as Smith took out 74 to win the seventh leg and go in front again. Three holds then followed, as The Bully Boy went into the second interval 6-4 in front.

Both held once more, before the big moment came in the 13th leg. The Rockstar again missed three darts to cut the gap to one, as Smith hit tops for a double break. Bully Boy held again to go within one, and almost ended the game in style, but missed double 12 for a nine dart leg. He eventually hit the double though, rounding off a victory, in which he went 10/35 on the checkouts, while Cullen finished on just 5/23 on the outer ring.