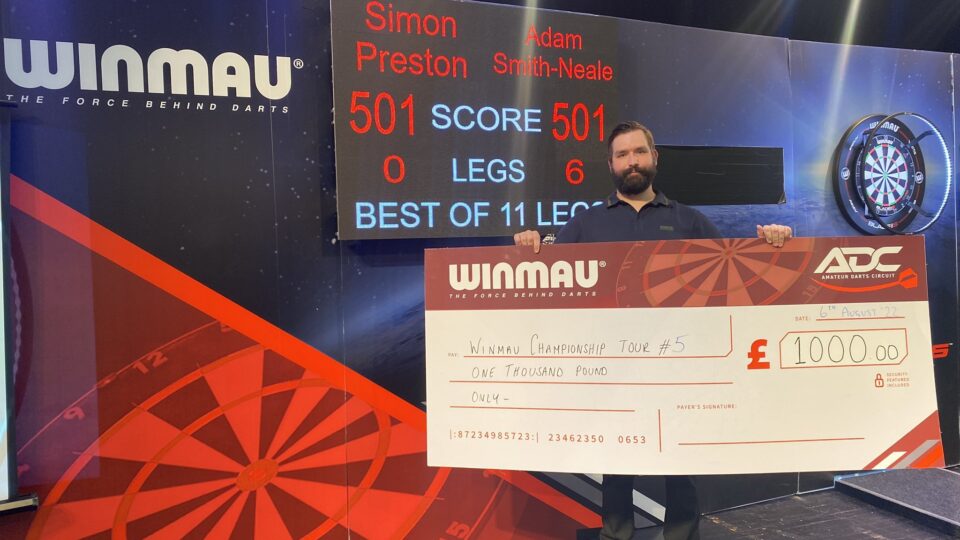 It was another busy weekend for the ADC as their tour events continued in Manchester with events 5 and 6.

Adam Smith-Neale bagged his first ADC Championship Tour,  as the big Dog beat Simon Preston 6-0 in the final of tour event 5  to reach number 18 in the rankings and pick up the £1000 winner’s prize.

Smith-Neale reached the Quarter Finals in Tour Event 3 where he lost out to Steve Brown 5-3 at the Thornbury Conference Centre last month. But revenge was sweet for Big Dog after beating the Bomber 5-2 in the Semi Final at the Forum Hall in Manchester averaging 89.38. The former World Masters champion earnt a spot at the Red Dragon Champion of Champions which will take place in Cardiff at the end of the month after his win on Saturday.

“Over the moon buzzing, I’m not playing a hundred percent but I’m playing ninety percent which is good, so the results were improving and that’s all I need to do”

“It’s not amazing, I’ve got a better game than that, but he didn’t turn up and I took advantage, that’s what I do”

Lee Budgen joined Smith-Neale in claiming his first ADC Championship Tour after beating Adam Warner 6-4 to win event 6, going top of the Championship Tour table a point ahead of second placed Gary Blades. Budgen is also up to seventh in the rankings with 501 points and 42 now off sixth placed Lloyd Pennell.

The 27-year-old came through a tricky Semi-Final with Ruthless James Richardson. This was heartbreak for Richardson as it was his third straight defeat in the Last 4.

“Relieved, I’ve not played that well today, ground the results out and to be honest with you I’m feeling a bit lucky, but I’ll take the win”.

“Get in I was thinking, I missed a couple of chances before, and I beat myself up after it and I knew I had to take that because if I missed, he would go 4-2 up so it kept me in the game.”

“ I don’t feel like number one, I’m very lucky, I think I played better yesterday but today has been a bit of a grind all day and I just found a way to win doing the right things at the right moment.”