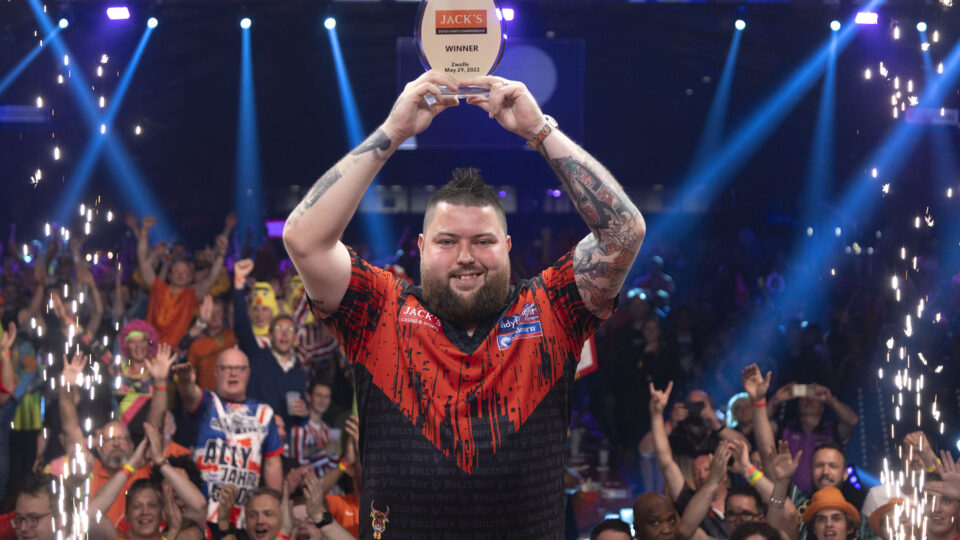 One of darts’ newest rivalries produced the goods yet again as ‘Bully Boy’ exacted some revenge for Noppert’s dramatic UK Open success over Smith back in March.

Routes To The Final

Fresh from Thursday evening’s success in Newcastle, Smith was full of confidence, as displayed when averaging almost 106 when beating Danny Jansen in Saturday’s second round.

He cranked that up to 111 as he defeated Damon Heta 6-3 in round three. Remarkably, there were no less than 13 maximums in the nine legs, Smith hitting eight to Heta’s five. Smith also hit the same amount of 140s.

That set up a clash with Mervyn King in the quarter-finals. Bully Boy quickly found himself 4-0 down before kicking off leg five with seven perfect darts. The nine dart chance went begging but he won the leg before reeling off the next five for a 6-4 win.

Surprise package Andrew Gilding then stood between Smith and a place in the final. The first nine legs went with throw before Smith got a vital break in leg 10 before closing out victory in the very next leg.

Danny Noppert’s Sunday started with a deciding leg success over world champion Peter Wright. Wright had thrown for the match at 5-4 but Noppert broke in 12 darts before claiming the decider in 13, much to the delight of the home crowd.

Boris Krcmar was next up for ‘Noppy’ and again, a final leg was needed to find a victor. ‘The Freeze’ again found himself with work to do, down 5-3 but bounced back to book a semi-final with Callan Rydz.

Noppert blew Rydz away, averaging 103 and hitting five maximums to sail through to the final with a 7-2 success.

Despite break opportunities for both players, the first five legs of the final went with throw. Smith then landed the first significant blow as he broke to lead 4-2.

‘Noppy’ hit straight back, finishing 128 on the bull to break in 12 darts with Smith waiting on 57.

Unbelievably, the next six legs were also all breaks of throw, including another two ton plus checkouts for the Dutchman, the second of these being a 121 on the bull to peg Smith back to 7-6.

‘Noppy’ then held throw to force the decider but Smith held firm, powering in a 12th 140 of the contest to leave 104 which he finished on tops at the first time of asking to claim the £25,000 first prize.

Of the remaining Dutch contingent, Dirk van Duijvenbode was knocked out at the quarter final stage by Andrew Gilding. Gliding averaged 104 to Van Duijvenbode’s 101 in a high quality contest.

Michael van Gerwen had seen his hopes of victory dashed in round three when he was beaten by Callan Rydz.

Rydz also defeated Simon Whitlock, who had earlier thrown to a triple bullseye finish to close out his victory over Daniel Larsson.