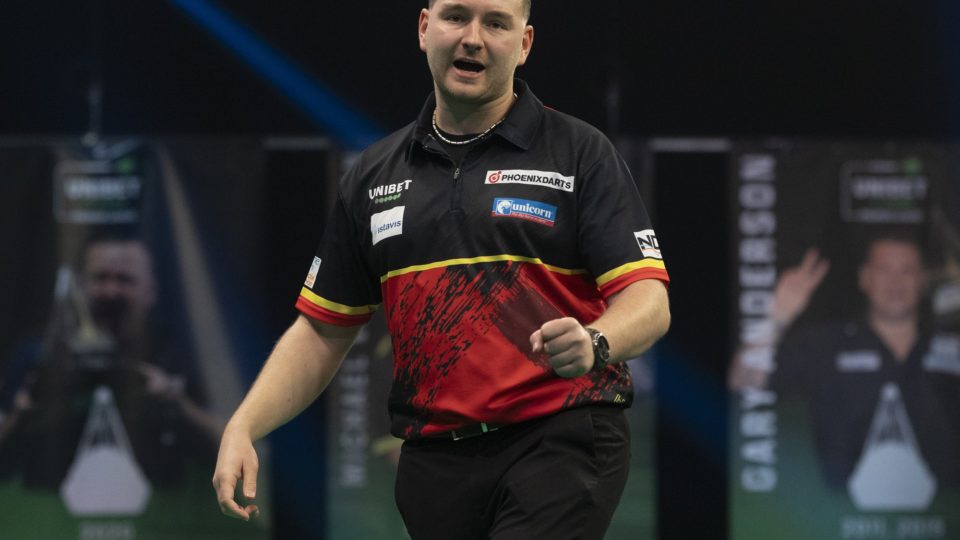 Having beaten him on night two in a last leg decider, the same happened on night 11. The Dream Maker came through 8-6 to remain the only person to beat The Asp in this year’s event.

The Asp remains top of the table, ahead of Michael van Gerwen on leg difference. Van Gerwen joined them level at the top by coming through a tough test against Jonny Clayton, winning 8-5.

In an excellent display of finishing, Van den Bergh got his Premier League Darts campaign back on track. He hit five checkouts with his last dart in hand, going 8/13 on the doubles.

Aspinall held in the opening leg, before missing bullseye for a 132 checkout to get a break. Van den Bergh punished, hitting a 120 outshot to level. He then followed it up with an 86 checkout to earn a break of throw, and held in 14 darts to take a 3-1 lead.

Both held, before an 88 finish on the bull from The Asp cut the gap to one. He left 98 after nine darts in the eighth leg, giving himself a chance to level. However, The Dream Maker took out a high pressure 136 checkout on double eight, to regain the two leg lead. Aspinall once again held comfortably in the ninth leg, and left eight points after 12 darts in the next leg. However, Van den Bergh took out a double five for an 80 outshot to go 6-4 ahead.

Two more comfortable holds followed, giving Van den Bergh a point. He could have wrapped it up in the 13th leg, but in a rare occurrence, missed tops for the match with his last dart in hand. Aspinall found double 16 to send the match to a deciding leg, but The Dream Maker would not be denied. 13 darts later, he hit double 18, to secure the vital win.

Van Gerwen level at the top despite poor performance

Michael van Gerwen could not hit the heights of a 110 average like last night, but still beat Jonny Clayton 8-5 to go one leg off top spot in this year’s Premier League.

Both held in the opening leg, before Clayton found a 52 outshot on double 16 to get the first break. MvG responded instantly, firing in a classy 117 outshot to level the match at 2-2.

Both missed plenty of chances to take the fifth leg, before Van Gerwen wrapped it up on double two for a 20 dart hold. 14 darts later, an 87 outshot gave him a two leg cushion. The Ferret, previously undefeated against The Green Machine before tonight, continued to fight though. A double 16 checkout saw him break straight back, before a 19 dart hold levelled the match at 4-4.

The five time winner of this event hit double four to hold in the ninth leg, and then he hit tops for a 14 darter, getting the crucial break to lead 6-4.

A 13 darter guaranteed Van Gerwen a point, before he missed the bull to win the match and go top of the table. Clayton found double 10 to keep the match alive, and let himself on 121 after nine in the 13th leg, giving himself a decent chance to level. Van Gerwen though found the best bit of quality to end the match. He hit a 124 finish on the bullseye to secure the two points, pushing Clayton out of the top four on leg difference.

Despite being 6-2 in front, and having chances to wrap up the win, Jose De Sousa had to settle for a draw against James Wade. However, due to the loss for Clayton, it means The Special One does go into the top four for the first time in his career.

De Sousa broke in the opening leg, hitting double four for a 65 outshot with Wade sat on his beloved double ten. He consolidated the break by holding in the second leg with a 64 checkout.

Wade got on the board in leg three, but was a double break behind 29 darts later. Checkouts of 74 and 72, the latter being a double double 18 finish, gave The Special One breathing space. Wade answered right back though, finding double five to round off an excellent leg and cut the gap to 4-2.

De Sousa however regained the double break in the next leg. After missing bullseye for a 161, he hit double 6 with his last dart in hand, with The Machine waiting on 52. Both then held in their next legs, meaning the Portuguese Man O’Scores led 6-3.

The Machine did not give up though. He found tops for a 13 dart break to cut the gap to two, before a 14 dart hold saw him trail 6-5. Despite missing five darts in the 12th leg, De Sousa found double five to guarantee himself a point.

But there was more drama to come in this topsy turvy game. The Special One missed four darts across two legs to get the win. Wade punished, winning two legs in 17 darts to earn a share of the spoils, and keep his own Play-Off hopes alive.

Gary Anderson remained alive in the Premier League Darts Play-Off race, at the expense of his World Cup winning Scottish teammate Peter Wright. The Flying Scotsman won 8-3 against Snakebite to cling on to hopes of finishing in the top four.

Three reasonably comfortable holds saw Anderson take a 2-1 lead, before The Flying Scotsman found the first break. An incredible leg saw him leave 87 after nine, before pinging double 18 for an 11 darter to go two legs clear.

A hold from the two time winner saw him go 4-1 up, before he squandered two darts at tops to go 5-1 up. Wright then found double nine to remain two behind. It did not deter The Flying Scotsman though, as he held in the seventh leg to go 5-2 in front, before punishing missed darts from Snakebite in the eighth. He hit double 12 for a 14 darter and a 6-2 cushion.

A 13 dart comfortable hold for Anderson guaranteed him a point, before he missed two darts for the match in the tenth leg. Wright held on double ten, to reduce the gap to 7-3, but it only delayed the inevitable. The double Premier League champion found a 74 shot to get over the line for a massive two points, producing arguably his best performance of the tournament so far.