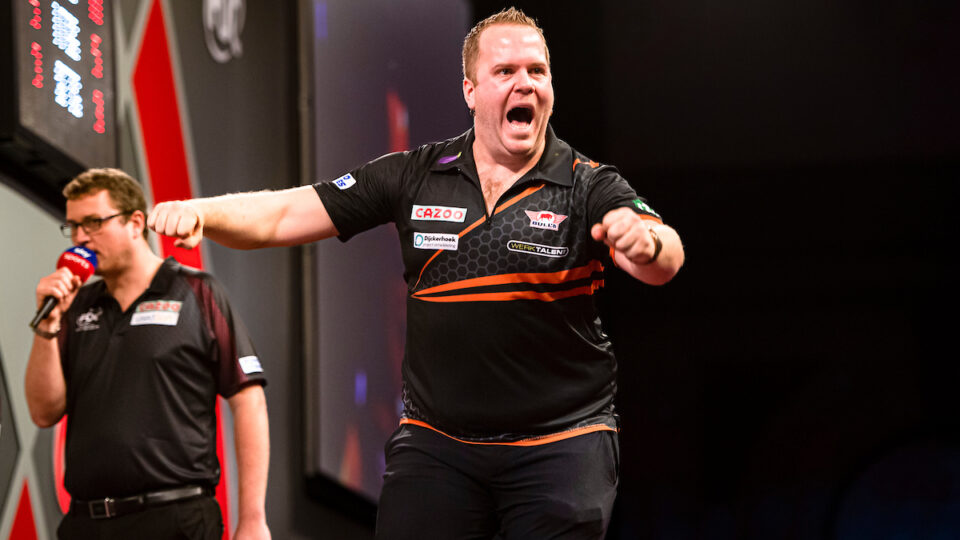 Dirk van Duijvenbode came through the game of the tournament as he and Ross Smith played out a ridiculous third round clash at the 2022/23 PDC World Darts Championship.

The Titan survived five match darts against the European Champion, as he came through 4-3 in a record breaking contest.

While that was to make the last 16, it was a great night for Wales. The world number one and 2021 World Champion Gerwyn Price, as well as Jonny Clayton became the first two players into the quarter finals. Price saw off Jose De Sousa, while Clayton overcame young superstar Josh Rock.

Elsewhere, the third round concluded with:

Van Duijvenbode and Smith was touted beforehand as the match of the day, and the pair served up an Ally Pally classic that will not be forgotten by anyone who watched.

Smith opened the match with an outstanding 156 outshot, but missed darts for legs two and three. Van Duijvenbode countered with a lovely 136 to level, before taking the first set 29 darts later with an 89 out. Roles were reversed in the second set, as The Titan won the first leg, but missed darts to win each of the next three. It allowed Smudger to level the match with a 25 outshot.

The missed doubles continued in the third set, as Smith missed darts to win legs one and three to give the Aubergenius a 3-0 set and a 2-1 overall lead. Smith responded in the fourth set, averaging over 111.1 and scoring brilliantly as he again won 3-1 to level.

The fifth set went to a fifth and deciding leg, where both missed darts to win it. Smith though eventually found double four to go ahead 3-2, the first time that a set was won with the darts. The sixth set also went to a decider, and both again missed darts to win it. This time, The Titan found double four to level up and send a gripping contest to a seventh and final set.

In the final set, Smith missed three match darts, allowing the Aubergenius to find double 16 to force overtime. Both held three times, which meant the match went to a deciding leg. Smith missed his fifth match dart on double five, allowing The Titan to ping tops for a 71 outshot and win a remarkable game.

Gerwyn Price moved one step closer to the title that he won in 2021, coming through 4-1 against Jose De Sousa to be the first player into the last eight.

After both held in the opening two legs, a 95 outshot gave The Iceman a break of throw. He then found double four to take the first set in the next leg. De Sousa then won the first two legs of the second set, but missed darts to level the match in legs three and four. The world number one punished, winning those two legs, before finding double five in the deciding leg to double his advantage.

De Sousa got back into the match in the third set, as he took advantage of poor doubling from Price to win it 3-1 on double six and halve the deficit. It almost was a similar story in the fourth set, as The Iceman missed set darts in leg four to allow De Sousa to level. However, a 64 finish on tops in the deciding leg gave Price a 3-1 lead.

The fifth set went on throw in the first four legs, with De Sousa missing a dart at double 16 to extend the match to 3-2. In the deciding leg, Price pinged a 100 outshot for an 11 dart break to win the game and make the last eight at the World Darts Championship for the fourth straight year.

It was not as comfortable for his Wales World Cup teammate Jonny Clayton, who had to come from behind to defeat Josh Rock 4-3.

Rocky got off to the perfect start, winning set one in just 41 darts against the throw, averaging 110 and not giving Clayton a look in at a double. He started well in the second set, but missed six darts to win the third leg. It allowed The Ferret to break, before an 11 dart hold saw him level the match.

The third set went on throw, until the fourth leg. With Rock on tops, Clayton finished off 104 by going single 18, double 18, bullseye, in a finish that delighted the packed Alexandra Palace crowd. The fourth set saw both players miss darts for it, but eventually Rock found double five in the fifth leg to level up an absorbing contest.

The fifth set went to a deciding leg, where once again, The Ferret missed a dart to win the set. The World Youth Champion found double six for a 72 outshot to go one away. In the sixth set, Clayton found an outstanding 122 to break in the third leg and a 16 dart hold on double 16 took the match to a deciding set.

The key moment came in the second leg. Rocky squandered five darts to hold his throw, and after a 180, Clayton hit double 18 to move within one leg of the contest. In the third leg, Rocky missed a bull to keep the going, and Clayton found double 16 to bring an absorbing contest to a close and move into the quarter finals of the PDC World Darts Championship for the first time in his career.

Humphries, Bunting and Cross all to play tomorrow

Just like his round two game, Luke Humphries won a last set thriller, this time against Vincent van der Voort.

Both held in the first two legs of the opening set, but a 78 finish from Cool Hand Luke with The Dutch Destroyer on 16 earned him the break, which he converted into a one set lead in the next leg. One break was enough again for Humphries in the second set, as two holds followed by a lovely 105 checkout doubled the Englishman’s advantage.

Van der Voort won the first two legs of the third set but missed the bull to get back into the match in legs three and four. Humphries levelled to send it to a decider, but missed two darts himself to go one away. The Dutch Destroyer then found double 16 to eventually cut the deficit in half, before taking advantage of more missed darts from Cool Hand Luke in fourth set to level the contest.

The Dutchman had a chance to take the fifth set, but missed two set darts in leg four. Humphries held, before finding double 10 in the deciding leg to go within one of the match. The sixth set also went to a deciding leg, where Van der Voort left tops after 12, taking it out to send the match to a seventh and final set.

Humphries broke in the opening leg of the set, before holding with a 140. A 79 outshot got him over the line, where he will play Stephen Bunting tomorrow.

Bunting beat Dave Chisnall in a high quality affair 4-2 which saw both players average over 100 and hit 20 180s between them.

A 126 checkout gave Bunting the opening leg, but 42 darts later, Chisnall won the opening set on tops after finding a 114 outshot to break the throw in the third leg. The Bullet responded well though, with a 10 darter on double ten giving him a whitewash set to level up.

Bunting won the first two legs of the third with relative ease. In the third leg, with Chisnall on 41, he hit a spectacular two tops 140 finish to get his second consecutive whitewash set, going in front for the first time. The fourth set went to a deciding leg, in which Chizzy hit double five to level the contest.

The high quality continued in the fifth set, as Bunting hit a set average of over 110 to go within one of the fourth round. Both traded ton plus finishes in the first two legs of the sixth, and again went to a deicider. In it, Chisnall missed tops for a 120 to send the match all the way, allowing Bunting to ping double 20 and get over the line. It’s his victory against Chisnall in eight attempts.

Rob Cross made the fourth round at the World Darts Championship for the second straight year as he beat Mervyn King 4-1.

Voltage won the opening set in 46 darts, before winning the second set in just 41 which included a lovely 110 outshot. The 2018 World Champion then broke in the opening leg of the third, and despite The King hitting an excellent 136 to hold in third leg of the set, he missed three to force a deciding leg, as Cross found double six to go 3-0 ahead.

King then hit a 96 outshot for a 12 dart break in the first leg of the fourth, and held twice to get a set on the board. Voltage though broke in the third leg of the fifth, before pinging double four to complete the victory. He faces Chris Dobey tomorrow.