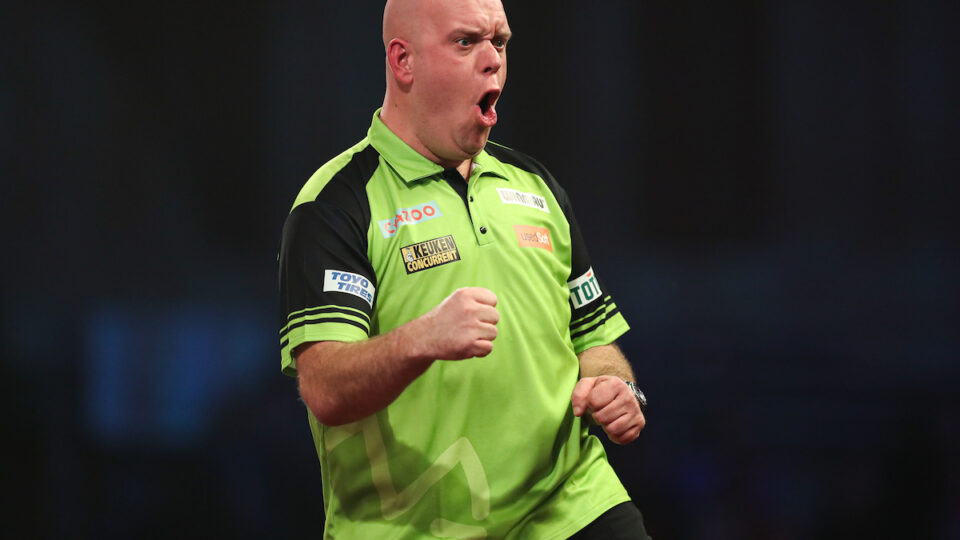 Last year’s runner up Bully Boy is looking to go one better in 2022, and he dismantled Joe Cullen 4-1 to set up a meeting with Stephen Bunting, who defeated Luke Humphries 4-1.

MvG sets up another Dobey duel at World Darts Championship

Van Gerwen yet again averaged over 100, something he’s done every game of this tournament, as Van Duijvenbode struggled to hit the same heights as yesterday when he played Ross Smith.

The first set saw missed darts at a double from both, but MvG got over the line on tops to go in front. The Titan found a remarkable Big Fish 170 checkout in the second set, but more missed doubles in leg four when 2-1 down offered an opportunity  for van Gerwen, which he took on double four to double his advantage.

The Aubergenius came to life in the third set, as two holds followed by two 180s in the fourth leg helped him to hit double four and halve the deficit. The fourth set went to a last leg decider and despite missing set darts in leg four, The Green Machine took out double 12 for a 16 dart hold to go within one of the match.

That seemed to break the Aubergenius’ spirit and 47 darts later, MvG found tops for a 120 finish to end the match in style.

Van Gerwen will play Chris Dobey in the last eight, after he knocked out Rob Cross 4-2 in a high quality affair to reach the last eight of the World Darts Championship for the first time.

Cross took the opening set with double 16, but Dobey took just 41 darts to whitewash the set and level the contest, hitting a 100 checkout to do so.

Voltage responded in kind, whitewashing Hollywood in 47 darts in the third set to go back in front. The fourth set saw Dobey take out The Big Fish 170 checkout to go 2-1 in front, and miss double 14 for a 145 to level the game. Cross pinged tops to force a deciding leg, but could not stop Hollywood, who took out double nine to make it 2-2 in the match, averaging 121.72 in the fourth to do so.

Both had chances to win the opening leg of the fifth set, but Hollywood found double eight to get a crucial break, which he followed up with two holds to go in front for the first time in the contest. Two holds from each saw the sixth set go to a deciding leg, where, after five attempts, Dobey found double 10 to win an absorbing contest.

Michael Smith showed his title credentials as he cruised to a 4-1 victory over friend Joe Cullen.

Both broke and held in the first four legs, as Smith pinged a 76 shot to win the opening set in the decider. The Rockstar responded well in the second set though, whitewashing it in 43 darts to level the game.

Roles reversed in the third, as The Bully Boy averaged 125 en route to a 36 dart whitewash set and a 2-1 lead. Both broke twice in the fourth set, including a magical 153 from Cullen, but after missing set darts in leg four, the Grand Slam champion pinged double four to go within one of the match.

The fifth set also went to a deciding leg, where Bully Boy hit seven perfect darts. Despite not hitting the nine, he eventually found double two to complete the job.

It will be an all St Helens showdown in the last eight, as Smith will face Stephen Bunting. Bunting produced another excellent performance to knock out number five seed Luke Humphries 4-1.

Bunting broke in the opening leg, before a 121 saw him go 2-0 in front. Despite a 119 from Humphries, Bunting took out 52 to close out the first set. The second set was even better for The Bullet, as he whitewashed Cool Hand Luke, hitting a 127 on the bull, followed by a 15 and 12 darter to double his lead.

After averaging in the mid-80s for the first two sets, Humphries hit a third set average closer to 100. After two holds, he left tops after 12, before hitting it second dart in hand to halve the deficit. The fourth set went to a deciding leg, where Bunting hit double nine instead of double 12 for a 144 to leave 6. With Cool Hand so far behind though, the Bullet pinged double three to go 3-1 ahead.

The Bullet then took control of the fifth set in the opening leg, hitting a 106 to break with Humphries on 79. After a hold of throw, he then found double 16 to move into the quarters for the second time in three years.

Gabriel Clemens became the first ever German to reach the quarter finals of the Worlds, as he beat Alan Soutar 4-1.

Clemens whitewashed his opponent in the first set, winning it in 45 darts which included a 114 to break throw. He hit just one of his seven attempts at double in the second set however, which allowed Soots to level up the contest.

The German Giant though got back to the first set levels in the third set, as he whitewashed Soutar with three 15 darters to move ahead again. The fourth set went to a decider, in which Clemens found double eight with his last dart in hand to go one away from the last eight.

A magical 148 from Clemens moved him within one leg of the match, but Soutar responded with two legs of his own to force a deciding leg. Both had darts to win the set, but after missing match darts in leg three, the German Giant found tops to set up a showdown with Gerwyn Price.

An 11 dart break gave The Dream Maker the perfect start, with a hold and a further break giving him the opening set. The Hurricane won the opening two legs of the second, but Van den Bergh reeled off the next two in 31 darts. Both missed set darts in leg five, but the 2020 World Matchplay champion hit double eight to double his advantage.

The key moment of the third set came in the third leg, as Van den Bergh broke on double eight before hitting the same double in the next leg to go within one of the match. Double eight and double seven outshots moved him within one leg and despite missing three match darts, eventually found double four to book a last eight game with Jonny Clayton.