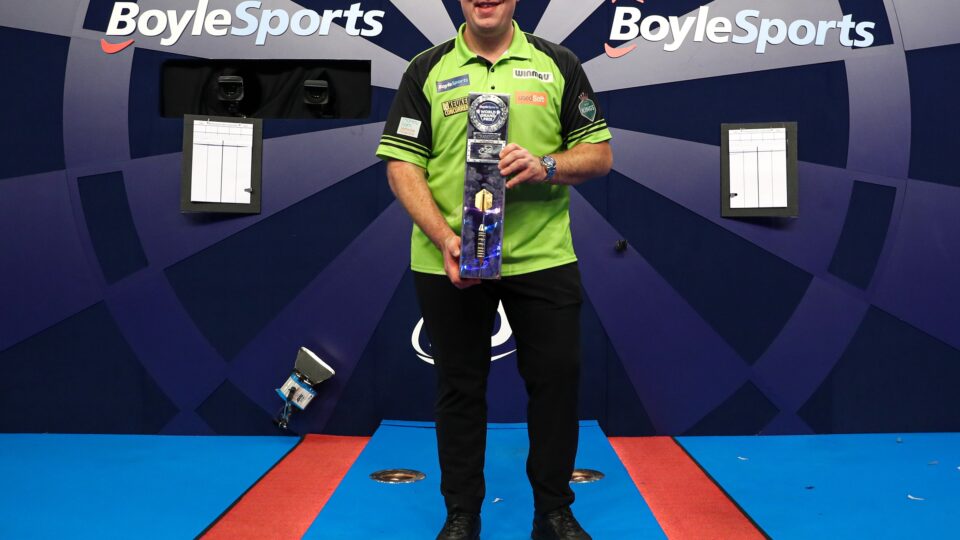 The Dutchman defeated Nathan Aspinall 5-3 to win lift the trophy at The Morningside Arena in Leicester.

The BoyleSports World Grand Prix is MvG’s third televised title of the year following wins in the Premier League and World Matchplay.

Dominant start from the favourite

From the very first moment Van Gerwen showed why he was favourite in this contest. A 116 checkout in the opening leg was followed by back to back 15 darters to wrap up the set!

The frequency with which Van Gerwen has found the double twenty segment to start legs this week has been frightening. Entering the match with over a 50% success rate. The second set came and went in his favour, helped by another 5 leg burst without failing to start a leg in the opening visit!

The Green Machine proved he is in fact human in leg two of the third set. Failing to hit a double with any of his first three darts in the leg. That leg produced a hold of throw for Nathan Aspinall, but once again, the deciding leg went in favour of former World Champion.

Set four felt like the do or die moment. It is without doubt that Aspinall revels in being the underdog. But giving up a 4 set lead to one of the greatest players of all time is ill-advised, even at the best of times. MvG claimed the set despite failing to start the leg in 3 out of 4 legs at the first attempt.

It seems a strange concept, but after such a brutal opening to the match, the pressure can often lift on the man trailing. That appears to have happened in set number 5. Despite losing the first leg, The Asp produced three on the spin to pick up his first set. The second of which came in 13 darts to break the Van Gerwen throw.

Set 6 also went in favour of the Englishman. 6 missed darts to open the first leg from the world number 3 allowed Aspinall a comfortable hold of throw. 2 more 15 dart legs wrapped up the set.

Rinse and repeat the order of the day in set 7. Aspinall again a 3-1 victor in the set. The crowd had turned by this point in the man from Stockports favour. Boyed by the concept of a history making comeback, and the prospect of more darts!

The 8th, and what proved to be the final set started in the worst fashion for Aspinall. Knowing just 3 more legs would put him into a deciding set with a player that an hour previous looked untouchable. Van Gewen raced into a 2 leg lead in the set putting him just one away from the title.
As is the story of the contest Aspinall once again fought his way back to a deciding leg, evening manufacturing a two doubles to win the set.
Those darts at double agonisingly failed to hit the target, and Van Gerwen cleaned up double 6 to with his 6th World Grand Prix Title.

Run to the title