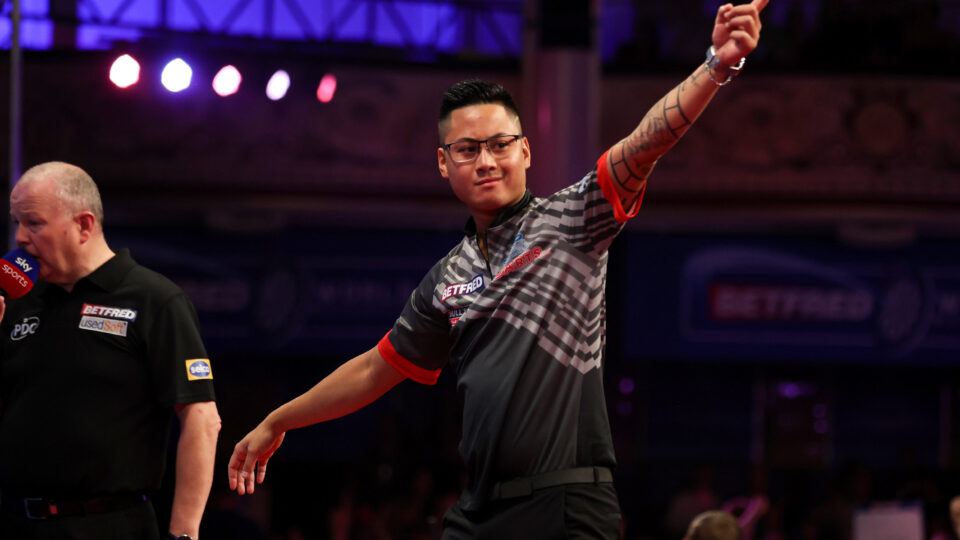 2022 Betfred World Matchplay got underway this evening with three seeds winning, and booking a place in the second round.

Rowby won the next two before Jonny fired in a 130 checkout on double five. This was overshadowed by Rowby John who fired in a 156 checkout to lead 6-4 at the break.

They shared the first two legs after. The Ferret had two darts at double 16 for a break but came outside with both and Rodriguez moved two legs away. Rowby then missed darts to break and Clayton hold with double 16 this time.

Clayton missed again to close the gap to one with a dart at tops, and with the last dart in hand, Rowby John cleans up 40 checkout. Match darts missed to win 10-6, however, his power scoring helped in getting more and this time he defeated The Ferret 10-7.

Defending Champion breezed past Madars Razma with 10-4 on his return to the Blackpool stage.

The game looked one-sided from the off with Razma missing six doubles in the first five legs with Peter Wright taking all five to the delight of the crowd.

Razma got off the mark in leg six but he was struggling to compete with the power scoring of Peter Wright, with Snakebite winning the session 3-2 and moving just two away from a place in the last 16.

Razma didn’t give up the fight winning the next two legs, but Wright found the Hayemaker in leg 13 with a 157 checkout and followed it up with a 15 dart leg to set up a meeting with Ratajski.

Dimi Danced Into Round Two

Dancing Dimitri came flying out the blocks averaging 111 after three legs with a 180 in every leg. Dimitri found another 180 in the next leg, but Rydz got off the mark with a 70 checkout.

The Dream Maker got the next leg to make sure he got the three-leg lead back. After the break, it was a 72-checkout for Rydz. However, The Riot was struggling on the hot stage and that second leg happened to be the last leg he would even have a dart at the double.

Van den Bergh’s scoring was just too much, finishing with a 100 average. He made sure he left an impact on the Blackpool crowd once more with a 137 to seal the victory, and he will return on Tuesday to entertain the crowd once more.

Ratajski Too Good For Bunting

Nothing to separate the two players early on with neither player able to get a two-leg lead even though we had numerous breaks of throw. The important moments came just before the second break with Ratajski holding throw before getting a crucial hold of throw. That was after Bunting missed the bullseye for a 167 to level the scores.

The lead got extended after the players returned to make it 8-4 and four legs on the spin. Stephen Bunting was able to find a hold of throw before an 11 dart leg to break and close the gap to just two. If people thought Ratajski was about to buckle under the pressure, he answered the doubters with an 11-leg break of his own.

The result was confirmed when Ratajski fired in a 90 checkout to book his place in the second round on Tuesday.