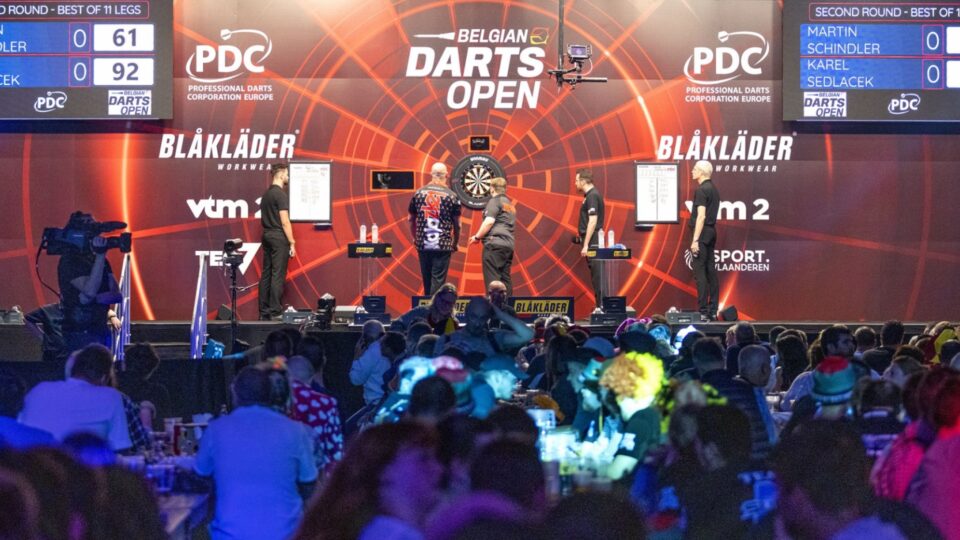 The pair were the highest profile casualties on day two of the European Tour event in Belgium.

Dutchman Michael van Gerwen was defeated by Kim Huybrechts in spectacular fashion. The Hurricane was the last remaining player from Belgium left in the field at the time. He ensured he will be back tomorrow to once again play in front of a home crowd with a 6-4 victory.
The match had its moments, as Huybrechts broke to lead the match 3-1. That’s despite some difficulty on the outer ring early on. But Van Gerwen hit back to level at 4-4, and even looked like leading 5-4.
The 10th leg proved to be the final one, but it definitely did not look that way. Van Gerwen left just 40 after 12 darts, but missed 9 darts at the target. Huybrechts, who was on 335 after 9 darts, then spent a couple of visits with less emphasis on winning the leg, and more preparing for the decider. However, the Belgian produced a sensational 134 check out to stun Van Gerwen, and move in to the final day of action.

World Champion Peter Wright was fastest out of the blocks in this one, and despite an early showing of just 1/6 on the doubles he eased in to a 4-2 lead. Zonneveld hit back with three straight legs to lead. The first time he had done so since leg 3. But he couldn’t shake Wright, who forced the match to a decider.
In the very first leg of the match Zonneveld took out 108 for the leg. The Checkout receiving a friendly acknowledgement and first bump from his opponent.
Bizarrely before the final leg commenced, Zonneveld offered Wright the courteous fist bump as has been customary in the sport in recent years. Wright turned down the offer, gesturing to wave the hand away. This seemed to fire Zonneveld up a little, who made no mistake second time of asking at double 9 to win the match.

Seeds do the business

Aside from Wright and MvG, today was mostly without upsets. Joe Cullen, Jonny Clayton, and Danny Noppert all made it through to tomorrow. They were joined by Rob Cross, Nathan Aspinall and Dirk Van Duijvenbode.
Dave Chisnall continued his great form with a win over Jelle Klaasen, whilst Adrian Lewis stole the show with an outstanding 102.94 average in a 6-1 win over Boris Krcmar.

Dimitri van den Bergh was amongst those to fall. The Belgian beaten by Andrew Gilding in yet another last leg decider today. Goldfinger continuing to impress in 2022.

Ross Smith was one of the other big talking points of today. With the final World Grand Prix spot on the line, Smudger produced a 103.31 average against Jose De Sousa. However, that average was in a 6-5 defeat to the Special One. Smith does remain in the 16th and final spot following loses for Keane Barry, Ryan Meikle and Mervyn King. Only a tournament victory for Neils Zonneveld will stop the Englishman heading to Leicester.