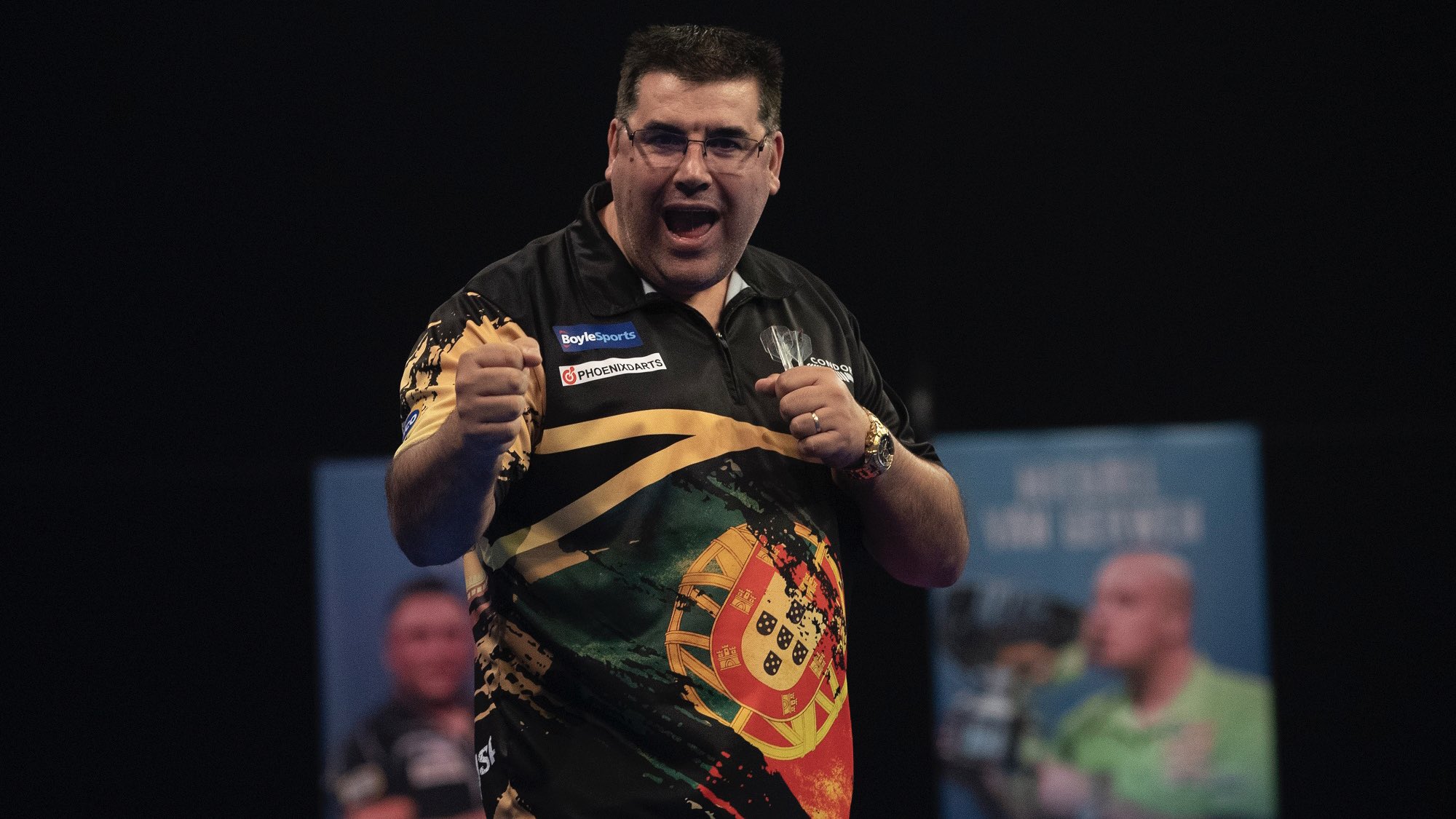 ‘The Special One’ captured his maiden PDC major title in the form of the Eric Bristow Trophy thanks to a superb performance that included a staggering fifteen 180s, a 99.95 average on the night and a mesmerising 158 checkout to wrap up the match.

The Portuguese has shown consistent development over an 18-month period, securing two Players Championship events along the way. However, this first televised crown has thrust De Sousa into the top 16 on the PDC Order of Merit, ensuring he will be a seeded player at next month’s World Championship at Alexandra Palace.

An outpouring of emotion was clear to see from a player who risked it all to pursue his aspirations of hitting the big time in the PDC, and having only just secured his tour card in 2019, it has been a remarkable journey that doesn’t have any sign of slowing down just yet.

“It was a special moment in my last darts because I knew I was going to make the double, and I almost started to cry before I threw the darts. It’s amazing, unbelievable. My dream has come true.

“After all my work, it was the right decision (to go full time). I still have contact with my ex boss, he’s a good guy. I think my family are happy for me. My wife is crying right now, I have to call her.

“I think since six months over here, I started to feel more at home and I started to enjoy my game on the stage. I’m now not afraid of anybody.”

“This changes everything. I don’t have to think about problems, money problems. They are finished. I’m a really happy guy.”

It wasn’t the best of starts for the eventual winner, as Wade raced into a 3-0 lead. De Sousa admitted afterwards he was initially feeling the heat, but mastered his path to recovery with a little self assurance.

“My first two legs, I was nervous. I don’t know why, because if you find the treble, it’s easy to relax and get your game going. I couldn’t find a treble so I was a little bit nervous.

“After the 3-0, I started to think ‘come on, just relax and enjoy your game, you have a great game of darts’, and that’s when I started to play in the final.”

Only The 6th To Win On Debut

De Sousa becomes the sixth winner of the Grand Slam tournament, adding his name to a short but illustrious list of previous victors, and he believes the triumph can spur him on to replicate his form in future events to cement his top 16 spot or even push on for the top 10.

“It feels amazing. I had respect of all the players, now I have absolutely all the respect from everybody. They know I can do this. It’s so nice to win this tournament, and I hope I can make more tournaments like this and give happiness to more people including my fans, my family, my sponsors, everybody.

“I saw before that I was (ranked) 20, I knew if I won this I was top 16 order of merit, so for me, it means a lot and for all the people who support me. I showed to everybody that I can do this better or the same like every player here. I will keep fighting. I have two tournaments more before the end of the year, and who knows if I could go a little more into the top 10 or stay in the top 16.”

“Mac Elkin (De Sousa’s manager) was unbelievable, how he supported me all the time, every moment. I just want to say thank you to all these people, it was unbelievable support. It is unbelievable and a dream come true. I don’t have the words to explain the feeling.”

After the upcoming Ladbrokes Players Championship Finals, also in Coventry, attention turns to the grandest tournament of them all; The William Hill World Darts Championship. De Sousa spoke of his belief heading into the December showpiece in north London, alongside a potential Premier League inclusion on the back of his success.

“I don’t know what I can do over there (at Ally Pally). My confidence is 200% right now, so I know I can do this. I can play against all the players, it doesn’t matter who the player is who I have to play. For me, right now, if I make my game and put in hours, that’s all the players in this moment.

De Sousa dedicated his win to those who continually back him from his native Portugal and current residence of Spain, and hopes that players from these regions could follow in his footsteps to PDC glory.

“At least in Portugal, they are very very happy for me, and I have received a lot of messages. They (Portuguese darts players) want to go to Q School and try to take a tour card, and I said it was good news (the win) not only for me but for the Portuguese people and in Spain it’s almost the same, they enjoy my game right now. They support me 100%. This is for all these people who support me.”

The 2020 Boylesports Grand Slam Champion returns to action in the Ladbrokes Players Championship Finals, aired live on ITV 4 and across our Live Blog from 12:30pm on Friday 27th November.