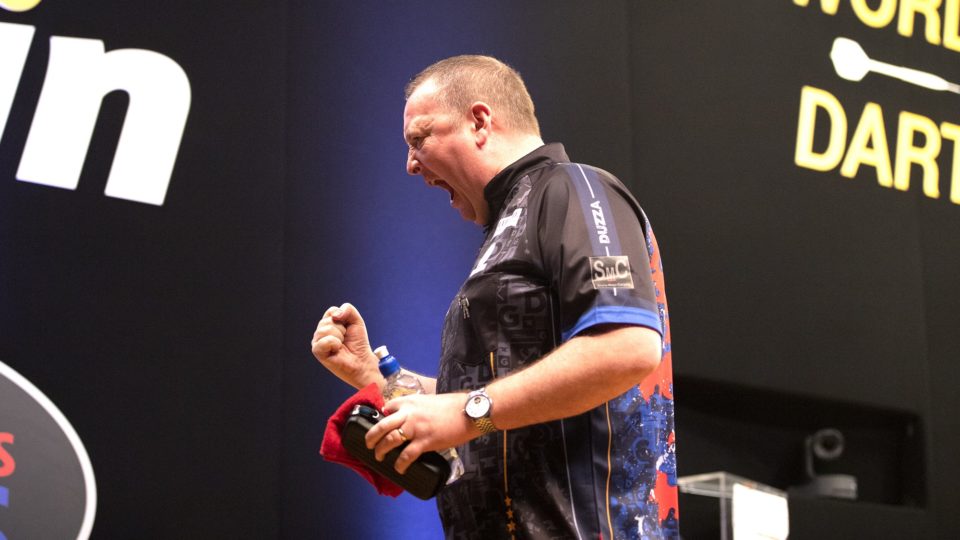 In a night of darting drama, Duzza was at it again. Durrant edges out Van Gerwen to maintain his unbeaten stage record against the world number one. The match turned on one missed dart at double 16.

Glen Durrant added to his collection of wins over the world number 1 as he became the only non-seed to reach the Quarter Finals.

In arguably the game of the night, both players averaged 102 in 10 legs of pure quality.

Both men defended their throw for the first 8 legs with neither man being able to land the killer blow on his opponent.
Durrant missed a dart at double 20 for a 132 checkout in leg 7 before MvG nearly responded with a break of his own. The green machine missing a dart at Bullseye for a 164 checkout in leg 8.

The crucial came in leg 9, and it went the way of the man from Teeside. Duzza is fast becoming infamous for his set up play, and an excellent 138 left him 68. Van Gerwen approached the board for 110 but missed the D16, allowing Duzza to step in and clean up.

The match was wrapped up in leg 10. Durrant attempting a tops tops checkout for 137 left 40. Van Gerwen had an opportunity at 80 to force a decider, but dragged his attempt at the double low, allowing Durrant to once again step in and take another victory.

“That’s a great win for me,” said Durrant, who now meets James Wade in the quarter-finals.

“I felt good tonight and I knew what was at stake – I realised I was playing the best player in the world.

“He’s the biggest challenge in the world right now and the second greatest player who’s ever picked up a set of darts.

“My CV compared to him is a million miles away – I think I’ve got an issue in his head, and that could be with the pace, but that’s something he has to deal with, not me.

“I know I’m a good player but this has all come really quickly. I’ve got to be really proud and I believe I’m up there with the best double hitters in the world right now. I’m in a fantastic place.

Canadian Smith was the spoiler of yesterdays action, as he recovered from 5-1 down against Fallon Sherrock to progress to round 2.

There was to be no such heroics tonight though, as he fell to steady James Wade to open the evening’s proceedings.

The match was on throw as the players headed to the interval. Wade the man ahead.

The Machine hit a 9 dart finish in the summer series last week, and threatened the same again in leg 2 as he opened with back to back maximums.

The match truly turned in the Englishman’s favour in leg 6 as he secured a break of throw in just 12 darts, before closing out with. 2 more comfortable holds of throw.

“It was quite nice to play in front of a crowd, it was good fun,” said the number eight seed. “Perhaps the break has done me the world of good in some ways, and I’m grateful to be back.”

The Asp coasted in to round 2 after dispatching Lucky D with an average of over 100.

Aspinall came flying out the blocks as he won’t the first 3 legs in just 40 darts. The pick of the bunch an 11 darter, following a 142 check out in leg 2.

The Lithuanian did manage to get a leg on the board in leg 4. His only attempt at a double in the match being successful at Double 20.

Aspinall then coasted to the finish line with 3 more legs on the trot, sealing the deal with a 100 checkout.

“I played well and I’m into the final day,” said Aspinall. “I used the five days in Germany as preparation for this weekend and I want to do the job – my target is to win it this weekend.

” love playing in front of the crowd and the fans make the sport so good. We’ve missed them and tonight was special – I loved every minute of it.

“I was looking forward to it so much to play in front of people again. It felt like my TV debut again, I had butterflies before I walked on, and it’s one of the most enjoyable games I’ve played in my career.”

Superchin was back to his fluid best as he booked his place in the Quarterfinals.

The Northern Irishman averaged over 102 as he put recent TV struggles aside to progress to Sunday’s action.

However, that failed to materialise on the night, as the 14 point difference in the averages shows.

Gurney was imperious from the get-go, and his sheer consistency of scoring was frightening at times. In the entire match, he only had 3 treble-less scoring visits.

“I played well tonight, and as long as you’re winning that’s all that matters,” said Gurney.

“I’ve got to get used to playing in front of a crowd again, tonight there was an extra incentive because you want to go out there and put in a performance.

“I played okay in the Autumn Series and I’ve been trying to be more positive in myself. For the last year and a half I’ve been practising the best I’ve ever practised and I’ve not been taking it onto stage.

“Tonight I felt a lot fresher but I’m still learning and the best’s still to come.”

Gerwyn Price relished his return to action in front of a crowd, as he brushed aside Vincent van der Voort.

The Welshman, became the third seed in a row to average over 100 on his way to Sunday’s action.

It was a slow start to the match, the opening leg going Price’s way in 19 darts, against the throw. That was swiftly backed up with a 13 darter by Gezzy as he asserted early dominance against an opponent averaging just 67.

The Dutch destroyer found a route in to the match in leg 3 as he held his throw in 17 darts. He looked to be back in the contest as the pair wen toff at the break with the scoreline sitting at 3-2.

Alas, Vincent was unable to force a break back at any point, and it was Price who capped off a fine performance with a 14 dart break of his own.

“I was under pressure all the way through the game but I stuck to my game and got over the winning line,” said Price.

“I knew I was in for a tough game but thankfully he wasn’t firing on all cylinders. I’m still playing well but I need to be on my A-game against Nathan.

“It’s nice to have the crowd back, I was enjoying it and it was a bit different. It was a little bit jittery in parts but I enjoyed it.”

Rob Cross cruised through against a below par Steve Beaton as the seeds continued their dominance.

The former World Champion’s form has oscillated for the past 18 months, and whilst this performance won’t allay any fears of a decline, the comfortable nature of the win may present a platform to build on.

It was dominance from the first dart for the man from Hastings as he only afforded Beaton 3 darts at a double in the entire match, with all of those coming in the 6th and final leg.

Legs 3 and 4 were by far the most impressive, as they were won in just 27 darts for Voltage.
However, he’ll need to up his scoring if he’s to lift the title tomorrow evening.

“I feel really good,” said Cross. “I’ve changed my set-up and my practice game is so much better than I showed tonight, but I’m glad to get the win.

“I enjoyed it. It was a little bit weird with Steve not playing his best, but it was amazing to have the crowd again. I can look forward to tomorrow now.”

Snakebite returned to action in front of a. crowd with a 6-3 victory over the Heat.

The reigning world champion faced a tough opponent in Heta, a former winner of a World Series event and recent winner during the Autumn series.

But, as the majority of the seeds did in round 2, he passed the assessment to progress to the Quarter Finals.

Interestingly, Wright was the only player to walk on stage in a face mask today but removed it for the match, The World. champ seeming to gesture to the crowd the significance of wearing a mask. through the current global pandemic.

On the board, it was yet another period of early dominance for the seeded player as the Scot open-end up a 4-1 leader at the interval.

Heta, like Van der Voort earlier in the evening, did manage 3 consecutive holds of throw. Unfortunately for him, like Vincent, he was also unable to find a break of throw.

“It was okay – I wanted to go up and do better than that, but to get the win was the most important thing,” said Wright. “It was amazing to have the fans back. I interacted with the crowd and they were fantastic.”

The Bullyboy rounded off the evening’s action with a hard-fought victory over the Polish Eagle.

Smith overcame a potential banana skin of a match against a player who, on recent form, inarguably playing the better darts.

Struggles on the outer ring paved way for Smith missout on a Spot in the Premier League finals. He had a torrid time throughout the PDC Autumn Series.

Ratajski on the other hand, had a run to the final on day 5 of the autumn series and overcame Mensur Suljovic in round one.

As expected for two players of this calibre, for the most part, this match went with throw. That despite squandered opportunities from BullyBoy as he became visibly frustrated with himself.

Like Durrant before him, the crucial break occurred in leg 9. A classy 14 darter, that could even have been a 12 setting up the match-winning opportunity.

That opportunity was grasped with both hands by Smith who again won the leg in 14 darts.

“I’m feeling good,” said Smith. “It was a bit of a struggle but I managed to keep my cool and finally get there in the end.”