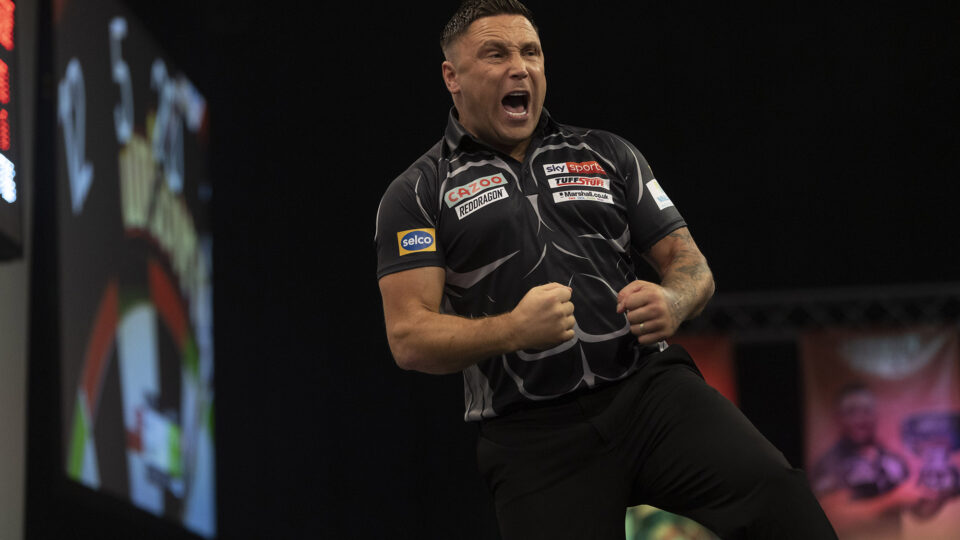 Day five at the 2021 Grand Slam of Darts sees the beginning of the knockout stages.

The group stage finished yesterday, with Fallon Sherrock producing a stunning 170 checkout, and Gary Anderson seeing off Raymond van Barneveld to book their places in the last 16.

They will be back tomorrow, but today is a day full of champions, as the:

Are all in action. Here’s what to expect on day five of the 2021 Grand Slam of Darts.

The first match of the night sees Ryan Joyce take on Rob Cross. Both come in to this match with two wins in the group stage. Joyce topped Group D despite a 5-3 loss to Chris Dobey in his final group match, while Cross lost 5-2 to James Wade in his final match in the opening stage.

Relentless came through a last leg decider against Stephen Bunting, followed by a 5-1 win over Rowby-John Rodriguez in his opening two matches. Voltage swept aside Boris Krcmar and beat Jim Williams to secure his passage to the last 16. Can Cross continue his return to form which saw him take the European Championship crown last month, or will Joyce make the last eight of this event for the first time?

The winner of that match will play either James Wade or Rowby-John Rodriguez in the quarter finals. Despite losing his opening match to Jim Williams, Wade qualified top of Group C with back to back 5-2 wins against Krcmar and Cross, the latter being his highest TV average of all time.

For Rodriguez, while he did lose to Joyce, victories against Dobey and Bunting got him the runner up spot in Group D, which saw him get out of the round robin stage of this event for the first time. Will the Austrian take out The Machine, or will Wade move one step closer to his first Grand Slam of Darts title?

Youngsters out to spoil Welsh party

The remaining two last 16 matches today come from the players who’ve qualified from Group A and Group B.

The third match of the day sees World Champion and world number one Gerwyn Price take on Bradley Brooks. Price survived a last leg decider against Nathan Rafferty, and then whitewashed Krzysztof Ratajski in his first two games. He then lost to Martin Schindler 5-4, but still topped his group.

Brooks beat Mervyn King, before losing to Jonny Clayton, and then beat Rusty-Jake Rodriguez to take the second spot in Group B. The World Youth Champion has played some excellent stuff in the group stages, but can he produced the biggest win of his career, and take out The Iceman? Or, will the Welshman continue his record of never being defeated in the knockout stages at the Aldersley Leisure Village, as he bids for his first TV title since winning the 2021 World Darts Championship?

The final game sees Jonny Clayton take on UK Development Tour runner up Nathan Rafferty. Rafferty only just missed out against Price in his opening game, but a win against Schindler, followed by surviving six match darts against Ratajski, saw the young man from Belfast into the last 16 as runner up of Group A.

By contrast, it’s been reasonably smooth progress for Clayton. Back to back 5-3 wins against Rodriguez and Clayton, followed by a nervy 5-4 victory against Mervyn King, saw The Ferret top Group B. The Welshman has won four TV events this year, leading some to label him as the best player in the world right now. Can he keep his bid for a fifth title on track, or will Rafferty produce a huge upset?